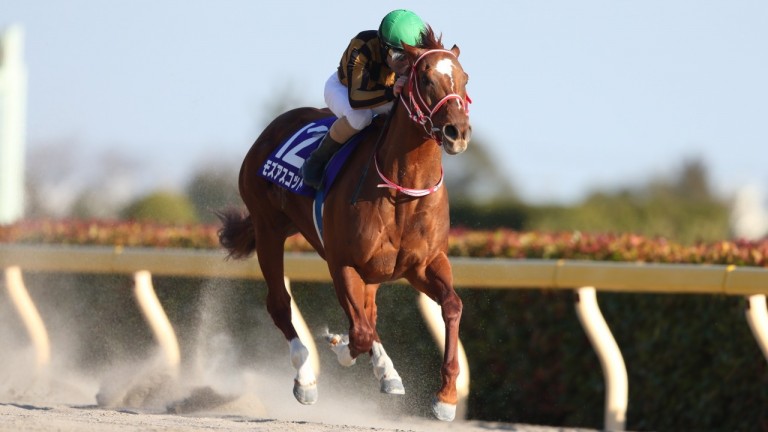 Mozu Ascot romps away with the Grade 1 February Stakes under Christophe Lemaire
1 of 1
By Masakazu Takahashi UPDATED 7:10AM, FEB 24 2020

Racing in the midfield on the inside, the 9-5 market leader Mozu Ascot went to the front at the middle of the home straight and kept on to win by two and a half lengths from the long shot K T Brave, stopping the clock at 1 min 35.20 sec for the mile.

Fast finishing Sunrise Nova was a length and a quarter back in third, but the second favourite and defending champion Inti was only 14th.

For Mozu Ascot, out of the Hennessy mare India, this was a seventh victory from 21 starts, and his second Grade 1 success. His previous top-flight win had come on turf, in the 2018 Yasuda Kinen.

Lemaire said: "He was training well and his condition was good so I was confident. I was worried the pace would be slow, but it was okay and he raced calmly, and he was able to show his amazing turn of foot."

Trainer Yoshito Yahagi said: "He is a great horse who has now won both a turf Grade 1 and a dirt Grade 1. His condition was better than the previous race, so I expected the result, although I was nervous.

"I will take him to Australia to contest the Doncaster Mile, and the main target this year would be the Breeders' Cup Dirt Mile."

FIRST PUBLISHED 11:41AM, FEB 23 2020
I was worried the pace would be slow, but it was okay and he raced calmly, and he was able to show his amazing turn of foot