Talk of the Tracks NEWMARKET THURSDAY 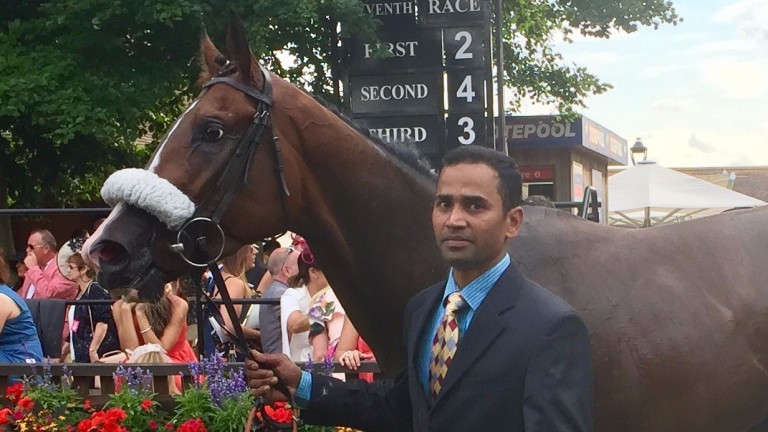 There was a perfect outcome to the closing Listed Sir Henry Cecil Stakes in which the winner Beat The Bank was led up by the lad that formerly looked after the legendary trainer's unbeaten superstar Frankel.

Sandeep Gauvaram, who left Newmarket earlier this year to work for winning trainer Andrew Balding, looked after Frankel during all of his 14 wins including when he won on his debut at the July Course in 2011.

Lady Cecil presented rose buttonholes to winning connections, as she has since the race was first staged in 2014, and this year's winners included jockey Jim Crowley, who was completing a treble on the day.

A delighted Gauvaram said: "I can't believe I've won Sir Henry's race and this is the first time I've been back to Newmarket since I left to join Andrew Balding earlier this year.

"It was like old times as Lady Cecil, who was presenting the prize, came and spoke to me and it's all a bit mad really. We only have one Frankel down at Andrew's and it's great that he's doing so well at stud.".

Balding added: "I'd think Henry organised that win and it's a great story. It's nice to have a winner for these owners as they've been very patient. I'd think we may have a look at the race at Goodwood, I think it's the Thoroughbred Stakes."

Lady Cecil, who still lives on the house at Warren Place, said: "It's great to see Sandeep and unbelievable that he's won Henry's race. It's a great day."

Spring Cosmos extended Charlie Appleby's impressive strike-rate with juveniles this year with a winning start in the 6f fillies' maiden.

The £100,000 breeze-up buy wasn't going to be caught once she was taken to the front two furlongs out and she went on to score by a length and a half.

Her Godolphin trainer went into the race with the stable boasting a record of 12 winners from 30 two-year-old runners and there was plenty of confidence she could maintain the sequence.

"She had the education of being a breeze-up filly and did everything well at home," said Appleby. "I told William to keep things straightforward and I was confident when she hit the rising ground that she'd see the trip out strongly.

"I'm very fortunate that at Moulton Paddocks we have the use of grass every day and some of these two-year-olds have been on the grass since January, which not everyone in Newmarket has. I feel that has helped and I have a great team behind me."

Hold-up sprinters are so often hostages to fortune, but things panned out perfectly in the 5f handicap for Shamshon.

Having joined Stuart Williams after being with Jamie Osborne last year, the six-year-old came through with a decisive late burst under Jim Crowley to nail Top Boy in the final strides.

It was a first win for Shamshon since joining Williams, who said: "I was getting slightly worried two furlongs out as you're always relying on a decent run through with hold-up sprinters, but he got it.

"We'll keep him ticking over and he'll run in the big sprints."

Racegoers got the chance to see what the Newmarket live acts can see with the opening of the "stage bar" and the ladies' day crowd were also wowed by a post racing set from Gok Wan.

Thought For The Day
There was the perfect outcome to the Listed Sir Henry Cecil Stakes but we have to ask why it was the last race on the card, which is unheard of for a black-type race