Frankel fever strikes as star sire has first winner down under 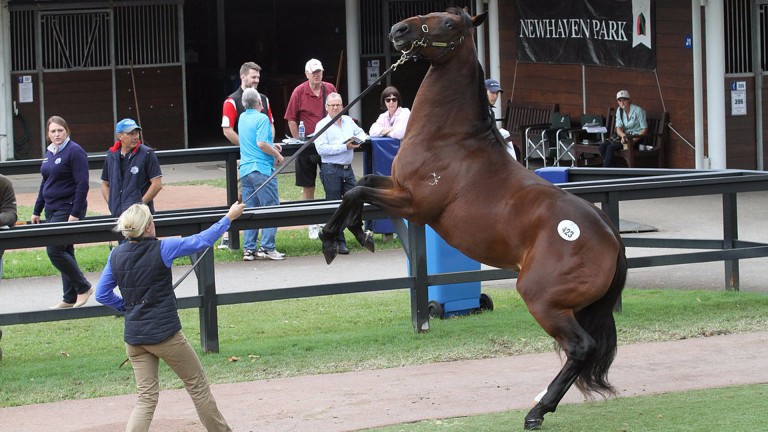 Merovee: the son of Frankel, pictured at the Inglis Australian Yearling Sales, won on his second start
Inglis_Sales
1 of 1
By Tony McFadden UPDATED 3:04PM, AUG 15 2017

Frankel broke new ground on Tuesday when Merovee provided the sire with his first winner in Australia.

As a son of the unbeaten Frankel out of Group 2 winner More Strawberries, who finished placed in the prestigious Golden Slipper, big things had been expected of Merovee since he fetched A$1.6m at the Inglis Australian Yearling Sales last year.

The Chris Waller-trained colt, who turned three in the southern hemisphere two weeks ago on August 1, could finish only sixth on his debut in March but was a different proposition with that experience under his belt and he got off the mark when taking the 1,350m [just short of seven furlongs] maiden under Hugh Bowman at Newcastle.

“He looked good and felt really good,” Bowman said to Racing North South Wales following the victory, which was achieved by just over three-quarters of a length. “His [debut] run was maybe disappointing at face value but I wasn’t disappointed because it was a slowly run 1,200m [six-furlong] race and he was simply outsprinted.”

Bowman added: "To the eye he still looks very immature physically so he is going to be a much nicer horse in time."

Waller's racing manager Charlie Duckworth also expects the colt to improve as he strengthens with age.

“Physically he was beautiful as a yearling but just when he grew he went a little bit weak on us – but that’s all part and parcel of growing up. He’s still got some strengthening to do so I’d imagine he is only going to get bigger and better in the next six months."

Frankel, winner of all 14 starts, including ten Group 1 races, has now had winners in Britain, Ireland, France, Japan, the US, Germany, Argentina, Chile and Australia as a sire.

The victory comes just four days after the first foal of Australian superstar Black Caviar, Oscietra, won on her second start on Friday.

Frankel around the world

Britain Cunco, May 13, 2016
The first of his famous father's progeny to make it to the racecourse, Cunco arrived at Newbury to much fanfare and media attention. He made the perfect start, winning cosily, and has since struck at Group 3 level.

France Toulifaut, July 9, 2016
Toulifaut struck at the first time of asking at Clairefontaine and won her next two starts, including a Group 3 contest.

Japan Soul Stirring, July 31 2016
Out of Stacelita, who won six times at the highest level, Soul Stirring made a deep impression when winning on debut at Sapporo and went on to provide Frankel with a first Classic success courtesy of victory in the Japanese Oaks.

Ireland San Remo, April 12, 2017
The half-brother to top-level winners Dubawi Heights and Make Believe got off the mark at the fourth attempt, winning a Dundalk maiden under trainer Aidan O'Brien's son Donnacha.

Germany King's Advice, May 25, 2017
King's Advice provided Frankel with a first success from a first runner in Germany as the son of Group 1 winner Queen's Logic won at Dortmund.

USA Rubilinda, May 27, 2017
Showed a stunning turn of foot to cut through from last and win a 6f maiden special weight on debut by over three lengths. She was purchased in utero along with her dam Rubina for 475,000gns in 2013.

Australia Merovee, August 15, 2017
Started repaying his hefty price tag when winning at Newcastle, with connections hopeful he will develop into a top-class colt in time.

Soul Stirring a first Classic winner for Frankel the sire

FIRST PUBLISHED 12:10PM, AUG 15 2017
To the eye he still looks very immature physically so he is going to be a much nicer horse in time