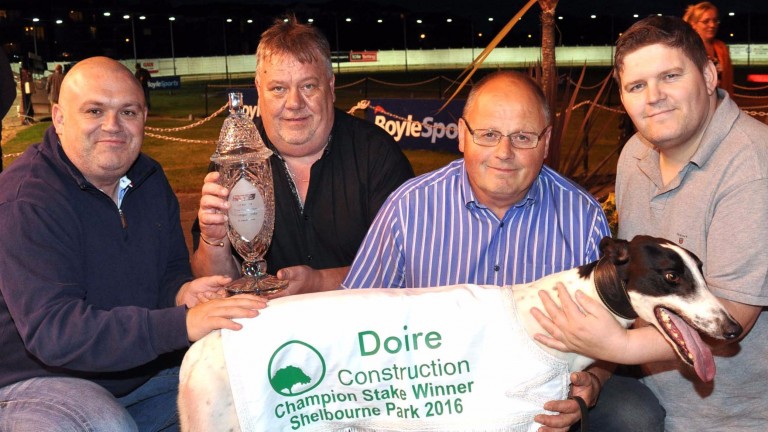 Star greyhound Clares Rocket, sensationally abducted from his County Tipperary kennel on Sunday night, was safely back with handler Graham Holland on Wednesday after being recovered by the gardai, who tracked the dog and his captors through counties Tipperary, Waterford and Limerick.

Four people were arrested when what is believed to be a special garda unit intercepted the vehicle carrying the dog and his captors.
While the gardai have not named them, it is believed one is a well-known Limerick criminal who has survived attempts on his life. Reports suggest a second man arrested has links with dissident Republicans.

Estimates put the dog’s value as a stud prospect at €1m or more.

'It was a real nightmare'

A hugely relieved Holland and his team in Golden, County Tipperary welcomed Clares Rocket back late on Tuesday night.

Speaking from his kennels on Wednesday morning, Holland said: "It was a real nightmare and the pressure here was terrible with the cameras and all the people outside the gates. It was hard to believe it was true.

"Nicki [his wife], our daughter Rachel and I went up to Belfast for a short break to see our son Christopher, who is a student up there, and to do a bit of shopping. We were on our way home on Monday morning when we were told the news. It was devastating.

"Our other son Timmy was in the house along with a friend of ours from England and thankfully they didn't hear anything. Timmy discovered the dog was missing at eight o'clock when he went out to check on the dogs in the kennels.

"I must say we got great support from the gardai and our local garda Eddie Nugent and detective Martin Steed from Tipperary town were extremely helpful. I can't thank them enough. Martin has dogs himself, so he was very understanding."

Holland revealed: "We picked the dog up at about midnight on Tuesday and basically he's absolutely fine. He was shaken up by the ordeal and his feet are a little sore, but he was in good condition and hadn't dehydrated. He ate up his feed last night and was in good form this morning."

One of the things puzzling the trainer is how the gang identified Clares Rocket from all the other dogs in the kennels. "We do let a lot of people see the dog when they visit here, so we'll have to be more careful in future," he said. "We have security cameras on the front of the building but have had good advice from the garda security unit and they have recommended we should increase our security."

A garda press spokesman reported they have had "huge interest in this case", adding: "We were getting calls from TV stations, radio stations and newspapers all over the place. The good news is that the dog is now safe and happy back in his kennel."

He confirmed that four men had been arrested but cannot be named. They can be detained under Section 4 for questioning for 24 hours but must then be released if not charged. In those circumstances a file would be sent to the director of public prosecutions.

Looking ahead to 2017 with Clares Rocket, Holland said: "He's having a well-earned break and will be aimed at the Derbys, probably including the English Derby. There won't be a lot going on for him for a while and we would probably think of the Easter Cup at Shelbourne for his return."

The relief in his voice was obvious and he summed up his feelings: "When we got him back it was like winning the Derby all over again. It was a huge relief."