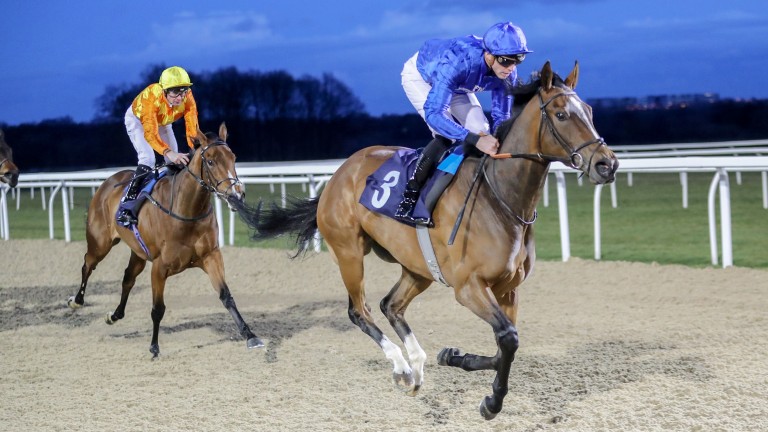 There is plenty of excitement away from Chester on the Flat on Thursday, not least at Chelmsford, where the seven-race card features a trio of £25,000 handicaps, a host of promising three-year-olds and has attracted top jockeys Frankie Dettori and James Doyle.

Doyle is at the track primarily to ride the unbeaten Fountain Of Time for his retainers Godolphin, the topweight bidding for a hat-trick in the Bet Quadpot At totesport.com Fillies' Handicap (7.10) over a mile.

The three-year-old daughter of Iffraaj has scored twice at this trip on the all-weather since the turn of the year, including when carrying a 7lb penalty to success over Playfull Spirit at Newcastle last time.

Trainer Charlie Appleby said on Wednesday: "Fountain Of Time has been a bit of a surprise package for us this year as she shows more in the afternoons than she does in the mornings, but she's going the right way and should enjoy the trip."

Stepping into the unknown, trip-wise, is the more experienced No More Thrills, who was going on at the finish when scoring over seven furlongs at Lingfield last time.

Bruce Raymond, racing manager to owner Saeed Suhail, said: "She's in good form but it looks a tough race. Thankfully she's getting some weight off Fountain Of Time, which will help."

Also containing a purse of £25,000 is the following Bet Trifecta At totesport.com Handicap (7.40), which is another three-year-old only affair but this time over ten furlongs.

Godolphin have another live hope in the shape of three-time winner Beautiful Memory, trained by Saeed Bin Suroor, but the seven-strong field also contains the equally prolific Desert Wind, who was pulled out at Sandown last time.

Bruce Raymond, racing manager to owner Sheikh Juma Dalmook Al Maktoum, said: "We took him out of the Esher Cup at Sandown when the ground went too soft, but he likes the all-weather and should enjoy the galloping nature of the track."

Also in the line-up is the Sir Michael Stoute-trained Zaaki, a winner at Thirsk last month.

With £118,500 in total prize-money, the card is the best evening fixture of the year so far, and also features last year's Northumberland Plate winner Higher Power, who faces four rivals in the Bet Scoop6 At totesport.com Conditions Stakes (8.10), including Weekender, who was disqualified and placed second in the Listed Noel Murless Stakes at Ascot on his last run in October.

FIRST PUBLISHED 6:00PM, MAY 9 2018
Fountain Of Time has been a bit of a surprise package for us this year as she shows more in the afternoons than she does in the mornings