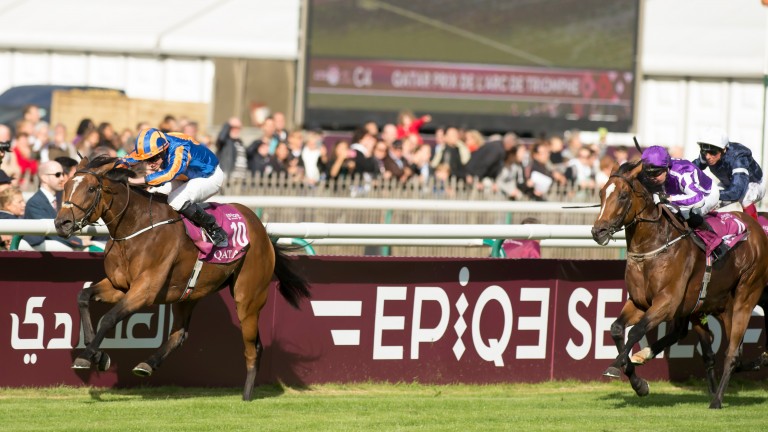 Aidan O'Brien and his Coolmore patrons demonstrated why they are without equal in the sport they bestride as Found led her stable to a magnificent 1-2-3 in the world's most valuable turf race.

In a ruthless display of their supreme power they swept the board in the €5 million Qatar Prix de l'Arc de Triomphe with Found, Highland Reel and Order Of St George – all sons of pre-eminent sire Galileo –and Ryan Moore – the world's best Flat jockey – central to the victory.

As O'Brien fielded the congratulations of Michael Tabor and Paul Smith, son of the absent Derrick, at Chantilly, and John Magnier by phone, he modestly tried to deflect the credit to his Ballydoyle team and multi-millionaire backers.

So it fell to Moore to underline the significance of O'Brien's unprecedented feat, which he equated to Frankie Dettori going through the card at Ascot 20 years ago and Michael Dickinson saddling the first five in the 1983 Cheltenham Gold Cup.

“It's one of those unique things, like Frankie's seven and Dickinson's five," he said. "The first three in an Arc is quite incredible – to get all three there in top shape and beat the best that's around. It's the hardest race to win in Europe every year and the first three home is just unbelievable."

Tabor said: "These things can't happen but sometimes they do. It was an amazing training feat. He is a master trainer, without any doubt."

Found had finished second in nine Group 1s, the last five consecutively, and was the victim of a troubled passage when ninth in last year's Arc, before turning the tables on winner Golden Horn in the Breeders' Cup Turf.

But in the first Arc run at Chantilly she and Moore ensured this was an occasion when the first prize was not destined for the lost-and-found department.

Moore settled the filly on the inside, two horses back from Harzand's pacemaker Vedevani, but when the tempo picked up three furlongs out Moore went for a gap between Order Of St George and Postponed and shot Found into a decisive lead with less than two furlongs to run. Nothing was gaining as they swept home by a length and three-quarters.

Highland Reel finished a length and half in front of Order Of St George, with 66-1 shot Siljan's Saga fourth completing a first four in which there was no three-year-old involved for the first time since 1975.

"I was able to get a nice position up behind The Grey Gatsby," said Moore. "I had the horses I wanted around me in my sights.

"She travelled very strongly. She moved into the straight going a bit too well but a gap presented itself, probably a bit earlier than I would have liked, but the way the track was riding today I thought I might as well take my chance. She quickened up and put the race to bed."

Despite a long season that began in April, Found finds her best in the autumn and was not worthy of her bridesmaid tag, said Moore.

"She won a Boussac at this time of year and a Breeders' Cup Turf," he pointed out. "She's been frustrating sometimes, but this was probably the main aim all year, she was in the best shape today and things worked out.

'She showed what she's capable of'

"She was back to a mile and a half, it was a nice, evenly run race and she showed what she's capable of. At her best she's a very hard filly to beat."

O'Brien, asked to assess his achievement, said: "How could you say anything is higher than this? It's the most difficult race. For that to happen it's incredible.

"Ryan gave her a brilliant ride and I'm so pleased for the lads. We've been at Ballydoyle 20 years, and year after year they keep putting back in and having faith in everyone.

"We appreciate the confidence they have in us and we're delighted for them when they get a good return. And all these horses are by Galileo, which is incredible."

Found was cut to a general 6-4 (from 7-2) to defend her Breeders' Cup crown, and a trip to Santa Anita is not ruled out.

Tabor said: "We don't have a plan and like to enjoy the moment. Aidan will tell us how she is and if she's Found as we know her I guess that will be the plan, but we haven't discussed it."

FIRST PUBLISHED 6:20PM, SEP 26 2017
It's the hardest race to win in Europe every year and the first three home is just unbelievable

Listed success for Katara rounds off a memorable weekend for Ryan Moore Four things we learned on the fifth and final day at Royal Ascot Ascot collector's item as Dettori's flying dismount outshone by tearful groom And you thought finding the Royal Hunt Cup winner was hard . . . 'There is no denying the phenomenal training that has gone into Rohaan' Ascot due a fitting finale with racing's greatest fan set to star on day five