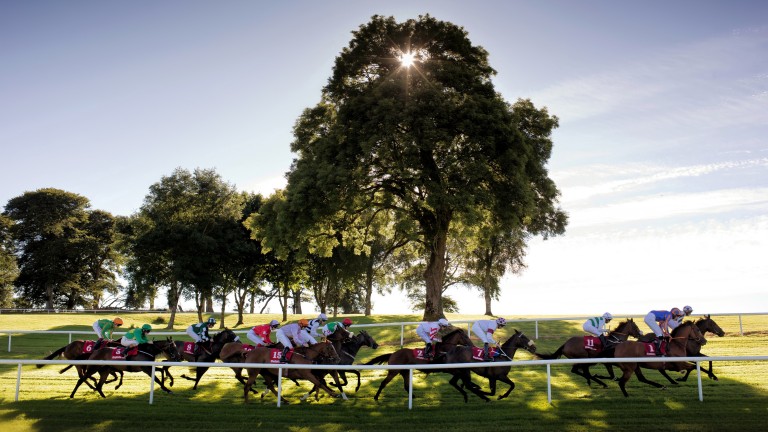 Former trainer Sharon Dunphy and owner Joey Logan have been disqualified for two years over the Like A Diamond affair – with Logan vowing to go to the high court to clear his name.

In a disqualification branded a “disgrace” by the owner, work-rider Fabian Burke also received a suspended sentence for the same term.

A Turf Club referrals committee found the trio to have acted in a manner that constituted "an attack on the integrity of Irish racing" for their roles in the incident that led to the gambled-on Like A Diamond being withdrawn before his intended debut at Ballinrobe in July 2013.

Like A Diamond was scratched at the order of the stewards after the Turf Club's head of security Chris Gordon acted on a tip-off that the horse was allegedly not trained by Dunphy at her Fethard yard.

Logan, the well-known trader who sourced the precocious Tolworth Hurdle hero Finian's Oscar, has pledged to go all the way to the High Court to clear his name, describing the disqualification as a "disgrace". He and Dunphy have lodged appeals.

"We will go further than the appeal if need be – this could easily go to the High Court," Logan said yesterday. "It's a disgrace for racing and they have given us no option other than to go the whole way. This is my whole livelihood.

"The Turf Club are saying we are bringing racing into disrepute, but they have no proof, and they are taking our good name away from us. They are making us out to be liars."

Like A Diamond had been backed from 50-1 into 3-1 on the morning of the Ballinrobe race, but the committee concluded there was no documented evidence to corroborate that he was trained by Dunphy.

Among 18 established 'facts' listed in the report, Logan and Burke were found to have galloped the horse in Dunphy's absence with Paul Deegan's string at the Curragh.

It was established that Logan's father Joseph had driven the horse to Ballinrobe, despite Dunphy also transporting a horse there for her then employer, Thomond O'Mara.

The disqualification of Burke, a brother of jockey Robbie and now a senior member of staff with Mick Halford, was suspended after submissions were made on his behalf by his current boss.

The regulator concluded the horse was "at all material times" trained by Burke, and that Dunphy acted merely as a facilitator in a plan "hatched to pull the wool over the eyes of the Turf Club, bookmakers and the public".

Logan, who has admitted having €500 each-way on Like A Diamond, had paid the €425 fee for Dunphy's licence renewal, which he says was merely a matter of convenience.

The referrals committee conceded its evidence was largely circumstantial but found that, while accepting Logan did not own the horse he was closely associated with him, and that Burke had been utilising stables in his yard in Kilmeague, near the Curragh.

In its report, the committee found the trio not to be credible witnesses, having "concocted a bizarre sequence of events" in their efforts to conceal what had happened.

At a time when Logan was on a joint Turf Club-Horse Racing Ireland forfeit list owing to a relatively minor unpaid debt, Logan senior had been listed as one of the members of the Fair Play syndicate that owned him. Logan senior died last February.

"It's a technical point, but there is no proof," Logan said. "I wasn't the registered owner and didn't have any contact with the Turf Club or HRI at the time.

"It was something we had nothing to do with really, as it was my father's horse, so I'm very disappointed because I'm such a big supporter of the game. "

The Turf Club is still reeling following the Pyromaniac affair in which its prosecution fall apart on a technicality, so the prospect of another court challenge could hardly come at a worse time for the embattled regulator.

Logan bought Finian's Oscar for €50,000 in 2015. After the son of Oscar won his point-to-point for Denis Murphy in the colours of Logan's wife Edelle last October, he was bought by Colin Tizzard on behalf of Alan and Ann Potts for £250,000.

Logan and his London-based business partner Alan Harte, who is from Dublin, have also combined to produce the likes of Champers On Ice, Champagne West, Western Star, and Poli Roi, who was knocked down to Gordon Elliott for £300,000 at Tattersalls Cheltenham sale in November after winning on his Rockfield debut.

Logan would be banned from running horses in his name but his ability to run his business is unlikely to be affected, as he can still buy and sell them. However, he is determined to clear his name.

"I don't want my reputation destroyed by something that has nothing to do with me," he stressed. "It was my father they were after for the first two years, and then when he died, they changed the name and put it on me, but I'm not going to lie down."

With the appeal pending "in the next few weeks," according to Denis Egan, the Turf Club's chief executive declined to comment further.

FIRST PUBLISHED 2:44PM, JAN 16 2017
The horse had been backed from 50-1 into 3-1, but the committee concluded that there was no documentary evidence to corroborate that Like A Diamond was trained by Dunphy