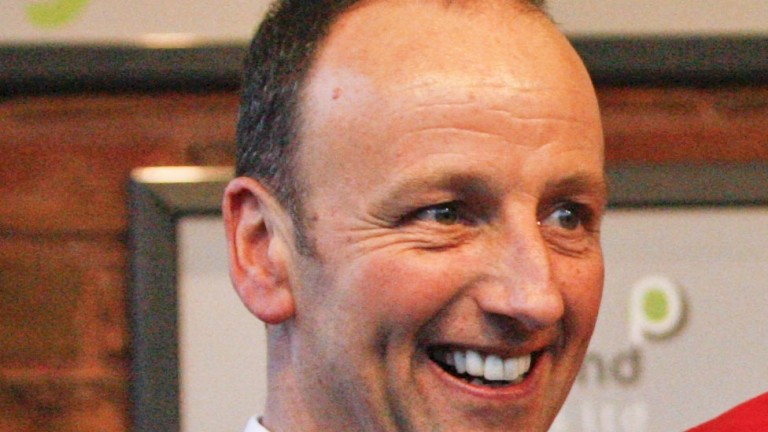 Anthony Knott: will not serve the remainder of his three-year ban
Mark Cranham
1 of 1
By Lewis Porteous 5:27PM, NOV 1 2016

Hunt Ball's former owner Anthony Knott, who was banned from racing for three years in 2014 for passing on inside information by a BHA disciplinary panel chaired by solicitor Michael Lohn, is free to resume his interests in the sport after the BHA announced he will not serve the remaining 13 and a half months of his penalty.

Knott expressed his surprise at the news when contacted by the Racing Post on Tuesday. “It’s all a bit of a shock and I haven’t any comment at the moment,” he said.

The Somerset farmer and colourful owner was found guilty of supplying inside information to former owner Anthony Callow, who won more than £6,000 laying Knott’s Theroadtogorey in a race at Uttoxeter in 2012. Both men were disqualified for three years. Knott had previously had an appeal against the initial conviction dismissed in April last year.

However, their case was one of seven highlighted by a leading QC as being potentially unsound due to the involvement of Lohn, who for more than two years was being paid to advise the BHA while also sitting as a supposedly independent member of the sport's disciplinary panels.

Following discussions with the BHA, both men as of Tuesday are free to resume their interests in racing after an agreement was reached without the matter going to arbitration or court, and with any record of the offence expunged from their records.

Lohn's involvement as the chairman of the disciplinary panel that found Jim Best guilty of non-trier charges has already resulted in that conviction being quashed and a rehearing ordered for November 21, and on Tuesday the BHA announced the rehearing of the case surrounding trainer Paul Gilligan, originally banned for six months for sending a horse to race at Uttoxeter who had previously competed at an unrecognised meeting in Ireland, has been scheduled for December 13 and 14.

The BHA declined to reveal if any payment for costs or otherwise had been made to Knott or Callow, citing the decision to lift the bans rather than contesting the application had been made in the “best interest” of the sport.

A BHA statement read: “Mr Knott and Mr Callow deny breaching the Rules of Racing. The consequences of the situation regarding Mr Lohn on Mr Knott’s and Mr Callow’s cases and penalties, for example whether the decision should be quashed, or whether the matter should be reheard, is a matter of dispute.

"However, bearing in mind that both have already served 22 months of a 36 month disqualification or exclusion, the BHA does not believe it is in the best interests of racing to spend considerable time and money either through arbitration or in the High Court, disputing those consequences.

"To avoid costly and protracted proceedings, the BHA has agreed not to enforce the remaining period of disqualification and exclusion, to remove the decision from both individuals’ disciplinary record and to remove their names from the BHA’s list of disqualified and excluded persons. Mr Knott and Mr Callow have agreed that this represents the conclusion of this matter."

Ian Mill QC was appointed to review all the cases Lohn had been involved in since October 2013, when the solicitor was first asked to provide separate advice to the BHA. All seven cases Mill identified involve guilty verdicts and penalties being imposed.

The BHA before Monday's announcement had not revealed any of the seven cases or whom they concern, although Lohn, as one of two legally trained chairs used on disciplinary panels, presided over a number of important hearings.

Of the six remaining cases, that remain unnamed, the BHA revealed three have now been closed, with correspondence with the individuals or representatives involved in the others ongoing regarding arbitration. The BHA was keen to stress the outcome of Knott’s case does not in any way infer what might happen in those cases.

"We believe we are taking a fair and reasonable approach and acting in the best interests of racing, while also bearing in mind the specifics of each individual case."

Three more occasions when Knott made the headlines

It was as a jockey that Anthony Knott first caught racing’s imagination as he celebrated wildly when riding a first winner under rules at Wincanton in 2008. After 28 years of competing without a win, the dairy farmer was so thrilled to finally find himself at the front he nearly threw victory away. The then 44-year-old stood up in his irons to celebrate and wave to spectators long before the line, allowing his rivals the chance to close. Despite those exuberant and premature celebrations he clung on to win, before milking the acclaim afterwards.

Knott was never far from the headlines, or controversy, during his time as an owner either, with the progressive Hunt Ball propelling him into the spotlight. He memorably jumped aboard the horse as it entered the winner's enclosure at Wincanton in 2012, an act that caused much amusement around the enclosure but was viewed dimly by the stewards who slapped him with a £100 fine for improper conduct.

Hunt Ball was also at the centre of another controversial chapter for Knott, when a publicity stunt with Paddy Power saw the horse's hindquarters emblazoned with the bookmakers' logo at the 2013 Cheltenham Festival. As a result he was fined £4,000 by the BHA for actions prejudicial to the integrity, proper conduct and good reputation of racing.