Talk of the Tracks LEGER LEGENDS 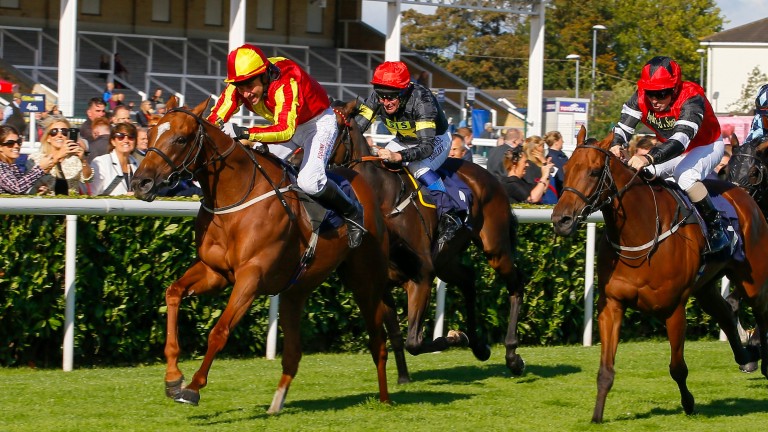 If you put together a horse for whom retirement was being considered and a jockey who had recently called it quits, what do you come up with? The winner of the Clipper Logistics Leger Legends race.

That winning combination of highly-respected former jump jockey Brian Harding, who only retired earlier this year, and the Tim Easterby-trained Off Art, a horse who hadn't won a race since June 2013 and was on the verge of having his racing career ended, proved a potent one in the ever-popular contest for former jockeys.

The winning rider said: "It was really good fun and all the work that Dale Gibson puts in to organise everything and raise the funds for charity is fantastic."

After riding 625 winners, Harding quit at Perth in April after a career spanning more than 25 years, most of them spent at Greystoke in Cumbria firstly with Gordon Richards and more recently with his son Nicky.

During that time he suffered more than his share of injuries, one of which caused an epileptic fit which meant a mandatory 12 months on the sidelines though within weeks of coming back he rode his biggest winner, One Man in the 1998 Queen Mother Champion Chase when drafted in at the eleventh hour to replace Tony Dobbin who was injured on Cheltenham's opening day.

He added: "When you win a race like this it shows how much you miss it. I'm half tempted to come back, giving up has been a wrench. I went to Kevin Prendergast when I left school at 15 and I'm 45 in a fortnight's time so I was riding for the best part of 30 years.

"Since I gave up I've been a jockey coach with Jamie Gormley, one of my lads who is doing well on the Flat, and I've several promising young jump riders as well.

"I've kept fairly fit riding breakers, but you ride them long and it's not quite the same and I was feeling it a bit in the closing stages there, I had to start pushing a furlong earlier than I intended."

Easterby and Harding are old allies for they have teamed up with dozens of winners over jumps through the years.

The trainer said: "When I saw who was riding there was only one man I wanted and that was Brian. He is still a good jockey. I know this was a one off race but he had it all worked out, where to go, who to track and though he had to start pushing a bit earlier than he expected, he saved a bit for the finish. I'm delighted for him.

"We were thinking of retiring Off Art, he has had serious problems with his feet but he's come down the ratings and what a difference it makes." 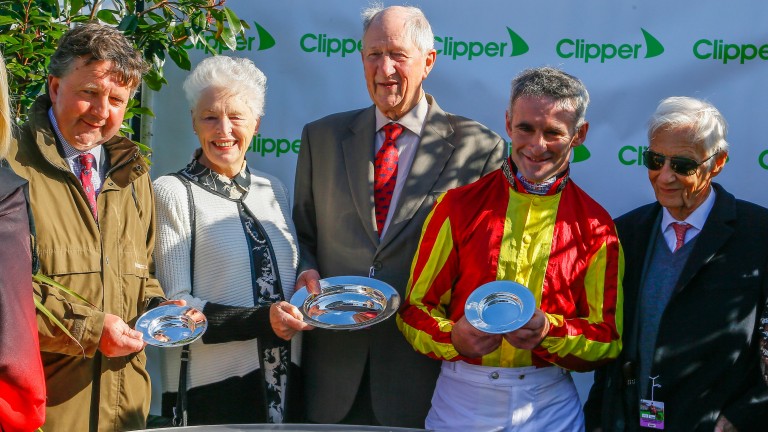 In fact Off Art was a 95-rated horse at his peak and Derek Lamplough, who also bred him and shares ownership with wife Mary, said: "He got down to a rating of 70 so I suggested to Tim that he ran in this race as it is for a good cause. It has been a great day, I don't think Tim will let us retire him now."

Adrian Nicholls was second home on Fire Palace and he said: "I had a great ride, just for a few seconds I thought I was going to win it."

Ian Mongan, who rode the third Character Onesie, said: "That was great fun, I thoroughly enjoyed it."

The unlucky horse of the race looked to be fourth-placed Detachment, whose rider Ollie Pears said: "I got short of room and wanted out, so I switched right and Brian's horse just rolled into me a bit. My horse ran well."

There is, though, a serious side to the race for it is the only charity race to be run under the Rules of Racing, which was made apparent to the riders when all 14 were tested for alcohol prior to taking part.

Gibson, who has yet to miss the race he plays such an instrumental role in, finished eighth on the well-backed Mustaqbal but vowed to return next year for his ninth ride in the race.

He said: "I'll definitely ride in it next year when we should go past the £1 million mark."

One rider who says he won't be taking part in 2018 is 70-year-old George Duffield, who has been a regular in the race and this time finished seventh on the joint-favourite Soldier Blue.

"That is definitely my swansong," said the St Leger winner.

Now that is something you would not bet on as unlike Steve Redgrave, who after the 1996 Olympics said he never wanted to sit in a boat again, Duffield spends most of his working life riding horses.

THE LIFE OF BRIAN
25 years of success in the saddle