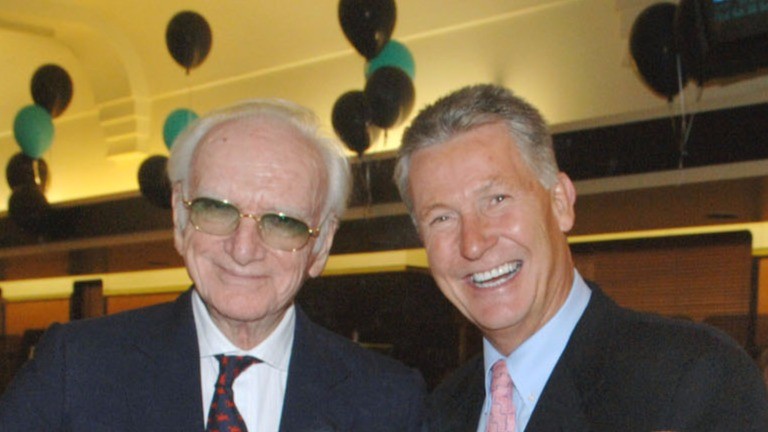 Neal Wilkins (right), who has died at the age of 68, with Sir Peter O'Sullevan. Behind the bravado and big cigar lay someone who was both genuine and generous, says Geoff Lester
Steve Nash
1 of 1
By Nick Pulford 7:12PM, NOV 29 2016

Neal Wilkins, long-time chief starting-price reporter with the Sporting Chronicle and the Press Association, has died. He was 68.

Wilkins was a well-known face in the betting ring and on racing television in his public relations role with Victor Chandler. More recently he filled the same role with Apollo Bookmakers.

He said: “I knew Neal for more than 40 years – we were both mentored by former Sporting Life chief reporter Len Thomas, and the three of us would travel to the races together, putting the world to rights.

“He was always first to the bar and last to bed, and nobody celebrated backing a winner better, with that infectious laugh invariably being preceded by the cry in the press room ‘given to all clients!’ He's been taken from us much too early, but Neal’s motto was ‘life has no rehearsal – best to jump out and make every post a winning one’.”

Brought up in Buckinghamshire, Wilkins was the son of a master draftsman and had no racing connection apart from a great uncle who was a bookmaker, but he was fascinated by the sport from a young age.

On leaving Burnham Grammar School, he wrote to every Fleet Street racing publication and worked his way up from the bottom, first at Stud and Stable magazine and then with the PA as a typist and later as telephonist for chief outside reporter Dai Davies.

When Bob Watson retired as SP man for the Sporting Chronicle in 1980, Wilkins took over that job, and when that publication folded in 1983 he returned to the PA in the same role, which he held until 2000.

He then spent ten years as Victor Chandler’s PR manager before joining Sussex-based firm Apollo, which is run by Chandler’s nephew Butch Beaton-Brown.

Wilkins’ great racing hero was Lester Piggott and he once said: “I’ve been fascinated by him from the age of eight and have kept records on him since my early teens. Most books written about him contain my statistical records.”

His other sporting passion was Arsenal FC and he said he had applied for the manager’s job on several occasions “but surprisingly was ignored”. Gunners legend Charlie George, a close friend, was among those to visit him during his last days in a Windsor hospice.

Inger, his third wife, stepdaughter Izzy and son Mark were at his bedside when he died. He is also survived by another son, Daniel, and his father Bob.