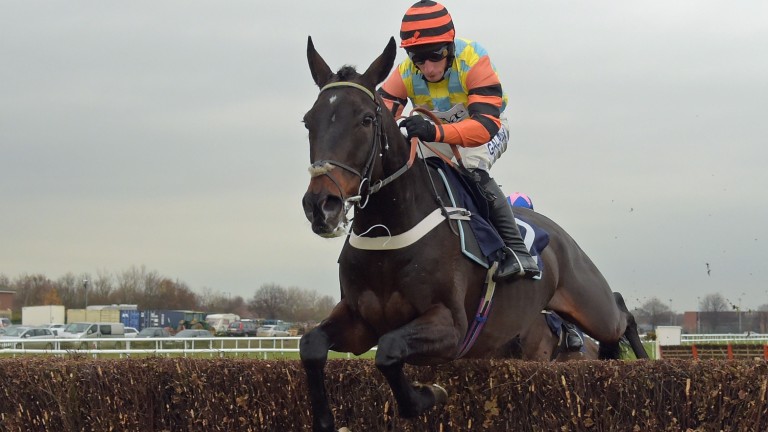 Might Bite, the novice who fell at the last fence when clear in the Grade 1 Kauto Star Novices' Chase, is set for a second rise in rating after the horse who was handed victory at Kempton won again on Saturday.

The RSA Chase second favourite schooled for the first time since his Kempton fall at Seven Barrows on Tuesday, after which trainer Nicky Henderson suggested the eight-year-old could seek consolation in the Grade 2 Sodexo Reynoldstown Chase at Ascot on February 18.

He ruled out handicaps, such as the BetBright Chase at Kempton a week later, despite Might Bite's mark rising to 154. That is 2lb above the new mark of Royal Vacation, who was trailing by 18 lengths when Might Bite came down at Kempton in a race he was set to win in a quicker time than Thistlecrack achieved in the King George VI Chase on the same card.

"I can't think of anything I would rather run him in less [than handicaps]," Henderson said. "When he's been through that he doesn't want to get into a massive field of handicappers. He wants to go round in a little novice chase and the Reynoldstown would be the most likely solution. He obviously has to have another run.

"His form stacks up in every sense. We can safely assume he was going to win, the horse that was going to finish second won at Cheltenham last week, and the time was exceptional. I've just got to get him back in one piece.

"I was very pleased with him this morning. He's had lots of little jumping lessons up to now but this morning was the first time he had jumped ten fences. He looks great."

Despite falling, Might Bite was raised 4lb to 152 after the Kempton race and Royal Vacation was raised 12lb before he followed up in the Timeform Novices' Handicap Chase on Saturday, which he won by eight lengths.

BHA handicapper Mark Olley has issued Royal Vacation with a new rating of 152, up another 9lb, and said Might Bite was set to be revised to 154.

"It's more a case of trying to keep these horses in some kind of order," he said. "Might Bite was going to win the race at Kempton. Frodon also fell in the race and won the Caspian Caviar Gold Cup and he's 153."

FIRST PUBLISHED 5:55PM, JAN 31 2017
He wants to go round in a little novice chase and the Reynoldstown would be the most likely solution