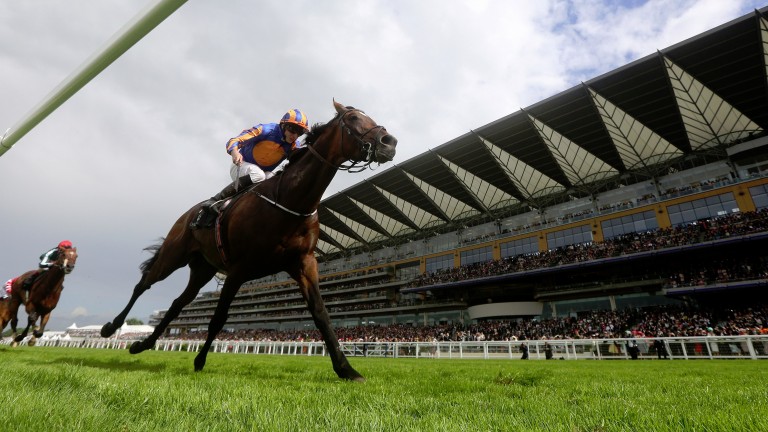 The opening days of Royal Ascot have demanded plenty of its guests. Amid pizza-oven heat better associated with the Bahamas than Berkshire, sweat and stamina have gatecrashed the usual style and panache off the track.

But having soared into the 30s on Wednesday, the mercury is set to descend to a more sensible level for day three, allowing the crowd –on what is traditionally known as ladies’ day but is not marketed as such – a more relaxing ambience in which to savour the action.

There is no such respite for the runners in the day’s – and meeting’s – feature race, however, a contest that demands bottomless stamina and endless courage of its competitors.

Ascot might be synonymous with the world’s best sprinters, milers and middle-distance maestros but its centrepiece is all about grit, determination and staying power.

Few sporting events remain as popular now as they were more than two centuries ago, but in recent years the Gold Cup has only bolstered its position at the top of Ascot’s pecking order.

Four years ago the meeting’s longest-standing race celebrated a royal success thanks to victory for the Queen’s Estimate, a win that sent temperatures soaring on a grey afternoon.

Before that came the domination of Yeats, a freakish athlete blessed with the speed to win at the highest level over a mile and a half and the engine capacity to not only last out the mile-longer Gold Cup trip but to win it four years in succession.

There may never be a horse who matches that achievement but, not unfairly, comparisons were drawn when Order Of St George – already a Group 1 winner over shorter – stepped into the unknown in last year’s Gold Cup and rose to the challenge with an inspiring three-length success.

Like Yeats, Order Of St George is trained by Aidan O’Brien, who has also delivered Fame And Glory and Leading Light to win the the Gold Cup since the fourth of Yeats’s victories in 2009. They too were blessed with that rare blend of speed and stamina, yet neither went on to add to their hauls in the Gold Cup.

There is good reason, though, to believe Order Of St George has the required arsenal to join past legends such as Sagaro, Le Moss, Ardross and, of course, Yeats as a multiple winner.

After last year’s success he put in a barnstorming effort to finish third behind two stablemates in the Arc and limbered up for his defence with a smooth victory at Leopardstown last month.

However, his armour is not without chinks and while certainly the standard bearer, he is not invincible. Indeed, three times in his career he has been beaten at odds-on, including at prohibitive odds of 1-7 in last year’s Irish St Leger, while his 2016 Gold Cup win came after a soggy start to the week.

Big Orange out to put squeeze on rivals

There would be celebrations to match Estimate’s win should Big Orange squeeze out another staying success. The giant galloper, whose never-say-die front-running style has made him one of the most popular Flat horses in training, has his first crack at the Gold Cup, having missed the race last year when his chance was washed away with the rain.

Big Orange thrives when the sun is on his back and his hooves are rattling against firm ground, and the tropical climes that have been prevalent this week are his ideal.

Another who has hinted this first try at an extreme distance could bring out more improvement is Simple Verse. The mare, who famously won the 2015 St Leger, then lost it in the stewards’ room before winning it back on appeal, was a close third on Champions Day on her first try at two miles and an extra half-mile could be to her advantage.

Queen hoping to rule in Britannia

Not even the state opening of parliament could keep the Queen away from her favourite sporting occasion on Wednesday, and there is an extra interest for Her Majesty on Thursday, with her first runner of the week coming as Maths Prize tackles 29 others in the Britannia Handicap.

The Queen has managed 23 winners at her favourite meeting – and quite probably her favourite week of the year – of whom four have come this century.

There'd be no more popular winner this week and Maths Prize does have a form chance and a low weight.

Quick off the mark

In contrast to the Gold Cup, the card opens with a test of speed for the juveniles in the Norfolk Stakes, in which US-trainer Wesley Ward fields favourite McErin.

Having caught the eye of those in Newmarket since his arrival in Britain, a bold show is anticipated, and with McErin billed as something of a beast to behold, if you intend to make it to the paddock for at least one race this one might be it.

The home team – led by two of the fastest youngsters from the north in Santry and Havana Grey – have already shown they too are not short of speed to burn, so McErin should have a fight on his hands.

FIRST PUBLISHED 6:00PM, JUN 21 2017
Ascot might be synonymous with the world’s best milers and middle-distance maestros but its centrepiece is all about determination and staying power