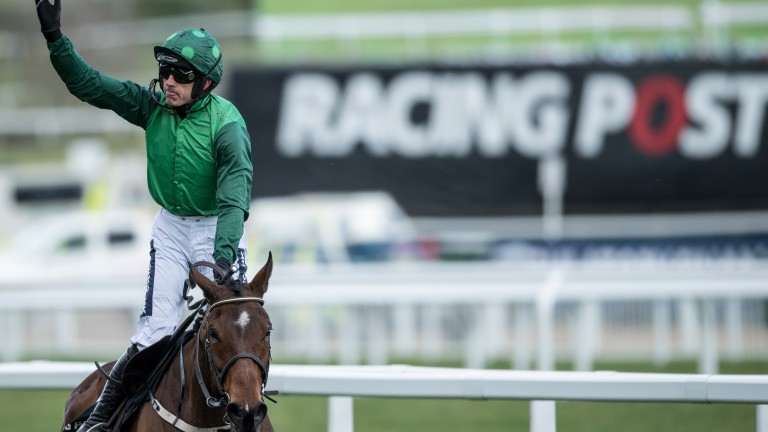 They are separated by four years but Footpad and Un De Sceaux have past Cheltenham Festival glory in common as they return to jumping's greatest stage to give Willie Mullins a clear chance of landing the Ryanair Chase.

Both are previous winners of the Racing Post Arkle, while Un De Sceaux is now seeking to capture a contest he won in 2017 before finishing second as 8-11 favourite 12 months ago. Paul Townend was in the saddle on that occasion and renews the association due to Ruby Walsh preferring the claims of Footpad.

Yet Footpad has plenty to prove. 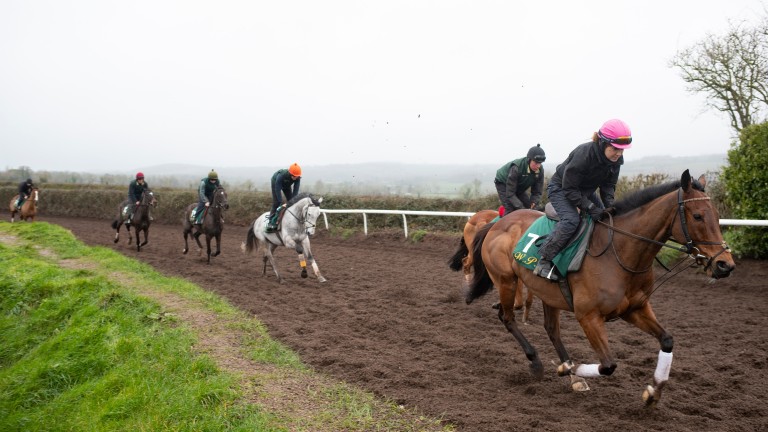 After destroying the Arkle opposition 12 months ago everyone assumed he would end up in this season's Champion Chase. However, he has been below his best in two starts this term, falling on his reappearance and then proving inferior to Simply Ned at Leopardstown over Christmas.

Anthony Bromley, racing manager to owners Simon Munir and Isaac Souede, said: "It's not been the season so far we quite hoped for, but Willie seems to have been happy with him in recent weeks and we're looking forward to seeing him over this longer trip."

Un De Sceaux won at both Fairyhouse and Punchestown following his 2018 Ryanair second, but he has been seen in public only once this season when chasing home Altior in the Tingle Creek.

Footpad pros: Brilliant when at his best and showed over hurdles he has the stamina for this trip

Footpad cons: Has lacked the sparkle of old this season and needs to bounce back

Un De Sceaux pros: His Sandown second to Altior was high-class form and suggested he remains a force

Un De Sceaux cons: Needs soft ground to shine but arguably it stretches his stamina at this trip

Key stat: Un De Sceaux has finished first or second in 27 of his 30 races

Monalee camp happy with their decision

Blessed with bundles of talent but yet to prove himself beyond intermediate trips at the highest grade, Monalee willattempt to make it third time lucky at the Cheltenham Festival, having bumped into Penhill and Presenting Percy on his previous attempts.

The opposition is none too shabby here either, not least from his own stable, with Henry de Bromhead also represented by last year's winner Balko Des Flos and Sub Lieutenant, second to Un De Sceaux in the race two seasons ago.

Monalee will be ridden by Rachael Blackmore, who opened her festival account on A Plus Tard on Tuesday, andvictory here would be her first Grade 1 success.

De Bromhead said: “I'm happy with the decision to come here rather than go for the Gold Cup. He's in great form and I'm hoping he has a great chance.

“Rachael gave A Plus Tard a brilliant ride on Tuesday and will be bursting with confidence. We're lucky to have her.”

It is hoped that a return to softer ground will bring out the best in Balko Des Flos, who has yet to produce last season’s form, while Sub Lieutenant would be best servedby rain staying away.

On the Gigginstown pair, De Bromhead said: “Balko Des Flos has been struggling on quick ground this season. He'll enjoy this softer ground and seems to be every bit as well in himself as he was going into the race last year.

“Sub Lieutenant might not be in love with the ground – the less rain that falls, the better for him.”

Monalee Pros:Grade 1-winning chaser representing a trainer-rider combination who were on the mark at the festival on Tuesday

Monalee Cons:Has come up short on both starts at the festival, albeit beaten by high-class horses 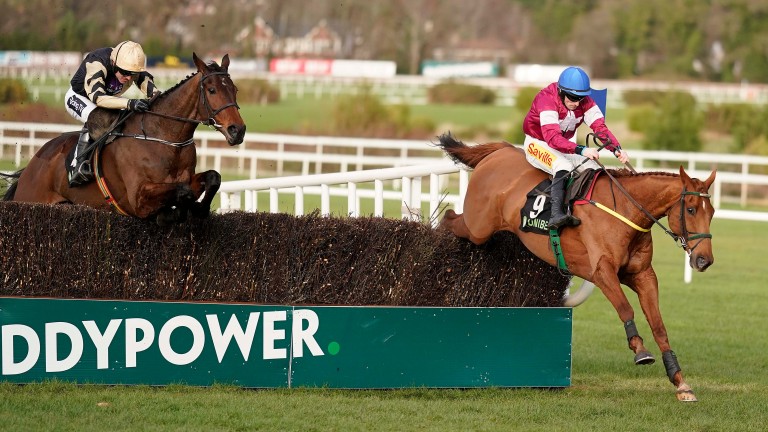 Road To Respect: jumping the last ahead of Bellshill in the Unibet Irish Gold Cup but ultimately lost out
Alan Crowhurst

Road To Respect started this season with a bang. A wide-margin winner of the JNwine.com Champion Chase at Down Royal, a race won by some of the best staying chasers in recent times, it looked as though last season's Gold Cup fourth would be charting a path back for the feature race of this week.

However, Noel Meade and Gigginstown’s Eddie and Michael O'Leary have decided a detouris thebest option, agreeing that this race represents his best chance of another festival win.

Meade said: “He travelled over great and I'm very happy with him. I had the Ryanair in my head for a while, just because I'm not quite sure he fully gets home over the Gold Cup trip.

"When I suggested it to Michael and Eddie they were in agreement. It looks a wide-open race but he goes there with every chance.”

Pros: Gold Cup-class but connections feel he has a better chance here

Cons: Footpad, Monalee and Un De Sceaux are more fleet-footed than horses he is used to facing

One of the true dream teams of jump racing has beenFrodon and Bryony Frost, whojoin forces again seeking to secure a Ryanair Chase success that would be sure to make marvellous headlines.

While Frodon produced a rare below-par effort in the race 12 months ago, he has been in tremendous form this season, winning three times, the last two at Cheltenham, where he most recently landed a recognised Gold Cup trial.

Connections understandably then considered the sport's most prestigious prize, but trainer Paul Nicholls ultimately came down in favour of the Ryanair. 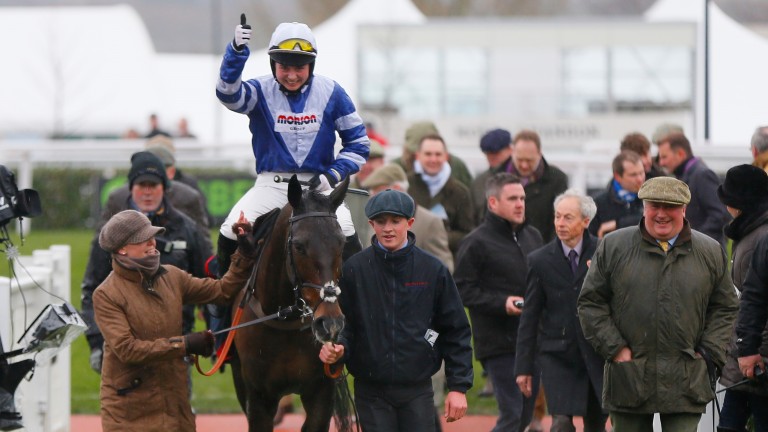 "The ground's going to be perfect for him over this trip, so we've definitely made the right decision to come here," said Nicholls.

"Last year he had a very hard race at Ascot before going to the Ryanair. That isn't the case this year. He's also a different horse this season, so we're really looking forward to him running. He loves this track, he's in great shape and we're very happy with him."

Frost told the BBC: "When he was younger he was quite bullish and a know-it-all. This year we've really clicked. We've just found this wave we're riding on together.

Pros: Has been in stunning form this season, the conditions of this race are perfect and he approaches it fresher than 12 months ago

Cons: Likes to race prominently but there could be plenty of early competition for the lead

The last two Cheltenham Festivals have not been kind to Charbel.

He fell in the 2017 Racing Post Arkle and fell again in the 2018 Champion Chase. However, even if a fence does not get in his way, this season's Peterborough Chase winner will need to step up considerably on previous form if a major shock is to be sprung. 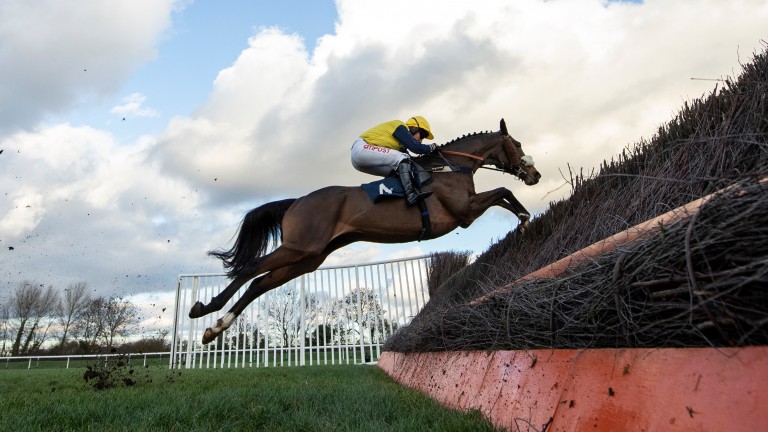 Charbel was impressive in the Peterborough Chase
Edward Whitaker

Trainer Kim Bailey said: "It's a race that's slightly hotter than I thought it would be when we decided to go for it.

"He'd have an outside chance of finishing third or fourth. If he could do that we'd be delighted. He's an old favourite, I love him and hope he runs very well."

Terrefort finished second in the JLT Novices' Chase 12 months ago but the Ryanair Chase betting suggests the six-year-old would be doing well to take silver again. 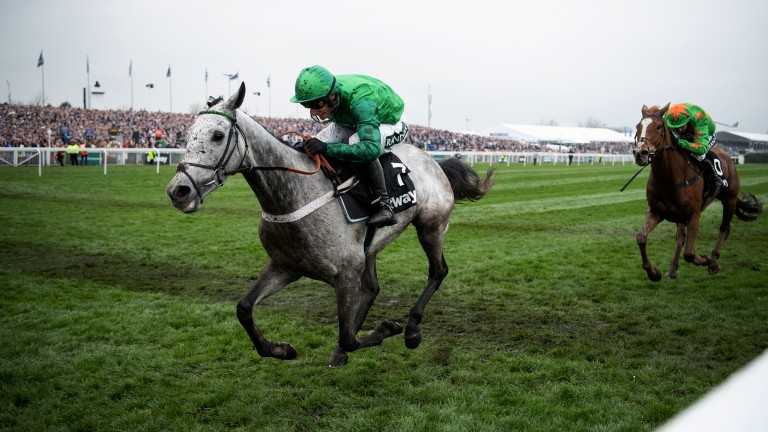 On his last two outings Terrefort,who runs in the same silks as Footpad,has been behind Frodon and Clan Des Obeaux. Trainer Nicky Henderson hopes dropping back in trip will prove helpful.

"He got wiped out by Clan Des Obeaux at Ascot but ran a good race and I think coming back in trip is slightly in his favour," said Henderson.

"He did win over three miles at Aintree but otherwise he was a two-and-a-half-mile horse. He does have to step up but he's still only young."

The best performance of Aso's life came over the Ryanair course and distance, when he carried 11st 12lb to victory in a New Year's Day handicap.

The problem he faceshere is that personal best needs to be bettered again if he is to have a chance of winning a race in which he finished third to Un De Sceaux two years ago.

Coney gets festival chance at last

It seems a long time since Coney Island produced a performance commensurate with his talent but he now gets a first chance to shine at the festival.

Trainer Eddie Harty said: "We've finally got him to the festival having twice missed the meeting. He's an outsider but if he recaptures his best novice form he'd have a chance. He's very well and the ground shouldn't be an issue."

With quality in depth, this looks the classiest Ryanair yet. It's not been theFootpadwe know so far this season and any stamina limitations lurking will be exposed in what should be a helter-skelter pace from start to finish, withFrodon,Un De Sceaux,Monaleeand one or two others at their most effective when on the front foot. It could set up a treat forRoad To Respect, who sacrificed a fair chance in the Gold Cup to run in this race and assured stamina might prove his trump card. Frodon never ceases to amaze and is feared most, though if feeling brave the frustratingConey Islandhas flashes of form that read well in any company.
Alistair Jones

FIRST PUBLISHED 6:00PM, MAR 13 2019
We have decided to go here with Monalee rather than the Gold Cup. I am happy with that decision and it will tell us whether our theory is right

Shishkin v Energumene round two could be 'even more exciting' - Henderson Shishkin is triumphant on a day when it was good to have shares in goosebumps 'He probably thought he was Shishkin' - Yala Enki claims third Portman Cup win Clarence House analysis: start was crucial in giving us the contest we craved Edward O'Grady: 'This isn't an obituary, pal - we're moving forward here' 'We hope a clear round will be enough' - Willie Mullins looks for Allaho repeat