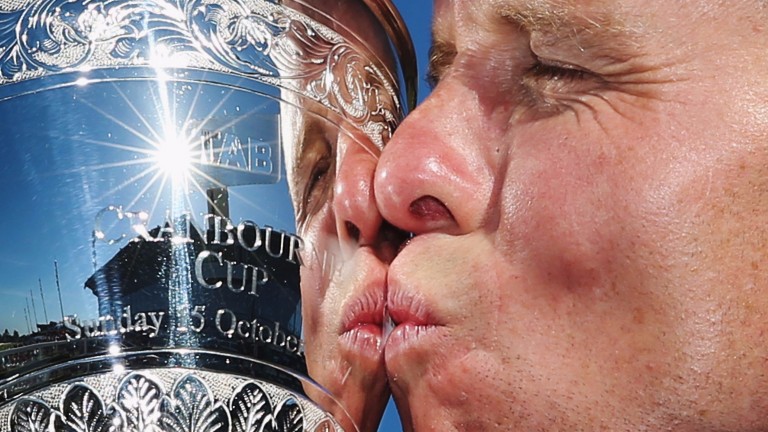 Kerrin McEvoy has struck up a fruitful partnership with Folkswood, winning the Listed Cranbourne Cup before finishing third to Winx in the Cox Plate
Michael Dodge
1 of 1
By Scott Burton 12:00PM, NOV 10 2017

Kerrin McEvoy will be back in tandem with Folkswood in Saturday's Group 1 Emirates Stakes (5.55am), having already bagged over £230,000 in two starts aboard Godolphin's son of Exceed And Excel.

Folkswood showed no ill effects from a four month layoff when winning the Listed Cranbourne Cup in mid October and then ran a career best to finish third behind the mighty Winx in the Cox Plate a fortnight ago.

"Folkswood came out of the Cox Plate in good form and has prepped well going into this race," said Charlie Appleby.

"A repeat performance of that run will put him bang there in the Emirates."

Prominently ridden in the Cox Plate, Gailo Chop has a length and a half to find with Appleby's runner on their finish at Moonee Valley.

Aidan O'Brien's The Taj Mahal gained a definite advantage but had little time to acclimatise between his fifth placed effort in the Irish Champion Stakes and a first start in Australia, when only finishing tenth to Galio Chop in the Group 1 Ladbrokes Stakes at Caulfield.

Appleby will still be on cloud nine following Wuheida's victory in the Breeders' Cup Filly and Mare Turf and holds strong claims in the Group 3 Queen Elizabeth Stakes (3.50am) with Qewy, who will bid to confirm his head success over Kiwia in the Bendigo Cup.

"We felt that Qewy needed a bit more time after his win, which is why we missed the Melbourne Cup," said Appleby.

"He is looking better with each day and the step up in trip will suit. If he carries on progressing, he should be very competitive."

Mike Moroney's Geelong Cup winner Vengeur Masque missed out on a place in the Melbourne Cup when beaten a head in the Lexus Stakes last Saturday and the former Mikel Delzangles-trained import remains a threat to all over this 1m5f trip.

FIRST PUBLISHED 12:00PM, NOV 10 2017
Folkswood came out of the Cox Plate in good form and has prepped well going into the race. A repeat of that will put him bang there in the Emirates

Doyle Force: Creative rider off the mark for the week as Appleby bags a 1-2 'Challenging horse' Kemari solves his trickiness puzzle with impressive success 'He's a horse we like a lot' - Roger Varian could hold key to big-field handicap Mohaafeth bidding for redemption for William Haggas after late Derby withdrawal Can one-of-a-kind Jim Bolger pull off more Group 1 heroics with Poetic Flare? One trainer, one jockey, one horse and one race to note on Royal Ascot day one