Foley out to cement link with Harrington on Brick By Brick 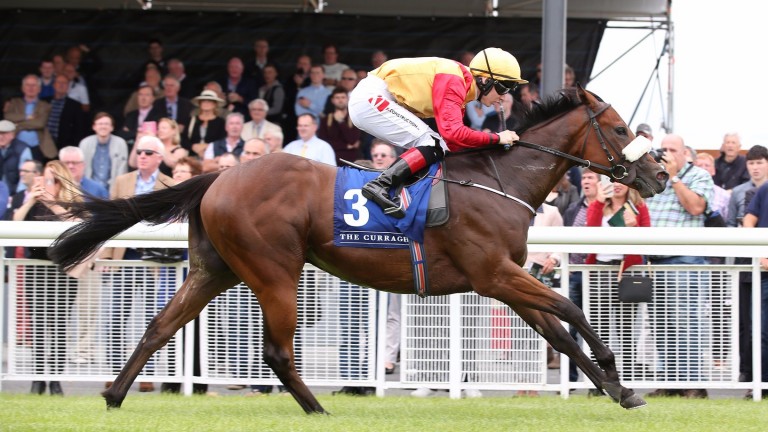 Brick By Brick, pictured winning over 5f at the Curragh last month, goes up in trip
CAROLINE NORRIS
1 of 1
By Tony O'Hehir UPDATED 6:16PM, SEP 19 2017

Shane Foley, operating as a freelance since his recent split with Michael Halford, teams up with Jessica Harrington for the ride on Brick By Brick in the feature event on Fairyhouse's eight-race card.

Foley rode a double for Harrington at Gowran Park on Saturday when standing in for Colm O'Donoghue, who was riding in Canada, and gets the call again as O'Donoghue is on duty for the trainer at Yarmouth.

Brick For Brick has shown his best form over five furlongs but Harrington believes the extra furlong will not be a problem. "Six furlongs around Fairyhouse should be fine for him. He's in good form and if he can finish in the money we'll be delighted," Harrington said.

Fleet Review bids to bounce back

All nine runners in the line-up are winners and both Fleet Review and Golden Spell will be seeking a third victory.

Twice a winner over the trip at the Curragh before disappointing over seven furlongs in the Acomb Stakes at York, Fleet Review represents Aidan O'Brien, who said: "He's been in good form since York. We're not sure whether seven furlongs was too far for him there but we're dropping back to six and we'll see."

The Johnny Murtagh-trained Golden Spell won a five-furlong maiden at Bellewstown and a nursery over this trip at the Curragh.

Gobi Desert justified favouritism when scoring on his debut over seven furlongs at the Curragh last month, after which trainer Ger Lyons indicated his intention to drop the Oasis Dream colt in distance for the rest of the season.

Also dropping a furlong in trip is Sollertia, winner of an auction race on heavy ground at Roscommon last month. The daughter of Mastercraftsman is well regarded by trainer Tracey Collins, who said: "Sollertia is a very nice filly. She's very well but we'll have to see how dropping down in distance will suit. Hopefully they'll get some rain."

Going up in distance is the Willie McCreery-trained Abamanova, who landed a five-furlong maiden by four lengths at Bellewstown last month. "She's in great form but it's going to be tough for her as she's got the widest draw," McCreery said.

FIRST PUBLISHED 6:00PM, SEP 19 2017
Six furlongs around Fairyhouse should be fine for him. He's in good form and if he can finish in the money we'll be delighted