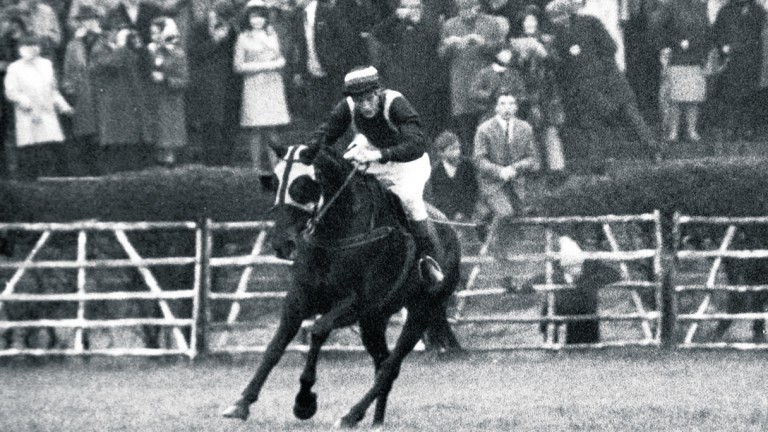 John Buckingham, forever to be associated with one of the Grand National's most improbable winners, has died aged 76.

Buckingham, the rider of 1967 winner Foinavon, died on Wednesday night after contracting pulmonary fibrosis, and the news brought a tidal wave of tributes from some of the biggest names in the weighing room, many of whom he looked after in his subsequent career as a jockeys' valet.

Richard Dunwoody said: "When you think of John you smile," while to John Francome he was "just about the nicest man I ever came across."

Sir Anthony McCoy said: "John was famous for riding Foinavon, but there was much more to him than that. Valets become as much of your life as the lads you're riding against."

Buckingham was preparing to go to an uncle's funeral when he got the call to ride rank outsider Foinavon at Aintree after three other jockeys had declined. He had ridden only 44 winners in eight seasons and had never before ridden in the big race, so he jumped at the chance.

"I'd have ridden Dick's donkey to be in the Grand National," he said afterwards.

After spending the Friday night sleeping between two armchairs pushed together in a boarding house his life changed when he partnered the unconsidered no-hoper to one of the most extraordinary victories in the great race's history.

A 44-strong field set out that year and Foinavon was the only one of the 27 still standing who avoided the carnage that unfolded after the riderless Popham Down veered across the 23rd fence.

Foinavon avoided the mayhem - and only just - because he was so far behind that Buckingham was able to steer around it and emerge with what proved an unassailable lead. The 100-1 chance scored by 15 lengths from Josh Gifford on the remounted favourite Honey End.

The image of Buckingham and Foinavon circumnavigating the stricken runners and jumping the Canal Turn the best part of a furlong ahead have become iconic. The fence between Becher's Brook and the Canal Turn was officially renamed the Foinavon fence in 1984.

For the first time in his life Buckingham was suddenly the centre of attention, and the following night he appeared with Bob Monkhouse on Sunday Night At the London Palladium.

The following season was Buckingham's best, with 21 winners, including San Angelo in the Grand Annual Chase for Edward Courage, who had given him his start in racing at 15 and for whom he had led up Tiberetta, who was third, second and fourth in successive Grand Nationals between 1957 and 1959.

A broken arm denied him the chance of partnering San Angelo in the 1968 Grand National, but he rode in the race three more times and might have gone close on Limeburner in 1971 but for being unseated two out.

Having partnered only one winner from more than 80 rides that season, he hung up his riding gear to become a jockeys' valet, and the riders he looked after in 30 years in the job read like a who's who of jumping's biggest names of the last 50 years.

The Grand National winners he looked after include, Richard Dunwoody, Carl Llewellyn, Hywel Davies, Graham Thorner and the amateurs Marcus Armytage and Charlie Fenwick. He was also the long-term valet of champion jockeys John Francome and Peter Scudamore, and in their early years he looked after both Sir Anthony McCoy and Richard Johnson.

Buckingham sold the business to jockey Chris Maude in 2001 following the death of his brother Tom, who was a partner in it, but he did not enjoy good health in retirement. He was soon diagnosed a diabetic and he suffered failing eyesight before finally succumbing to pulmonary fibrosis.

He leaves a widow, Ann, daughters Laura and Lucy, and four grandchildren. Funeral details to follow.

You think of John Buckingham and you smile. He was just that sort of person. He was a wonderful man, a great character, and it was fantastic to have him in the weighing room, where he and his brother Tom made a great team. We all took it very seriously – me more than anyone probably – and John was great at bringing us back down to earth or taking some heat out of situations.

John was just about the nicest man I ever came across. He was my valet for 12 years and did a fantastic job. He had a great sense of humour and was impossible to fall out with. He had been suffering with his health lately but it's still very sad.

As everybody will tell you, he was a lovely, lovely bloke. He looked after me for 27 years, from when I started at 16 until my retirement. I spent a lot of hours with him, and it was like having a best mate at work with you because he was great fun to be with every day. He loved what he did and nothing bothered him. He never brought up Foinavon, but if somebody else did we would all have a bit of fun over it. It's very sad.

John was my valet and I bought the business off him 15 years ago because his brother Tom was very ill. He was just one of life's lovely, lovely men, with a constant stream of appalling jokes. He was a very kind man, and we are all shocked and saddened. He would have done many, many miles looking after the jockeys, and he touched many lives.

John and his brother Tom were my valets from my first ride in England at Stratford, and the first pair of boots I borrowed from them were an old pair of Peter Scudamore's. They were both great fellows and they looked after a lot of good lads. John was a very calming influence in the weighing room, and very caring too. Valets become as much of your life as the lads you were riding against, and a very important part of the fabric of the weighing room. John was famous for riding Foinavon, but there was much more to him than that.

The weighing room is a very special place for a jockey, and 'Buck' was at the centre of it. I'd known him when I was a kid and my father was riding, because he played for the National Hunt jockeys' cricket XI. He was just a lovely man, and how he put up with us all I'll never know, especially (Steve) Smith Eccles, who wanted 'Buck' to carry his saddles around long after it became the norm for jockeys to take their own to the track - and also to get him his Head And Shoulders!

He looked after me from day one, when I walked into Huntingdon in 1973 for my first ride as a wet-behind-the-ears 17-year-old. Your valet is your best friend. He's there for every ride. You have fun together and he's there for you when you want to take out your anger or frustration. He was a great mate, and I'm very sorry to hear it.

Very sorry to hear of the passing of Johnny Buckingham. He was a top man and the heart of the jockeys changing room for many years.

His riding career goes before him and he was my first valet, along with his brother Tom, when I was 16 and he really looked after me when I was starting out. He was a true gentleman and it's a sad loss to the racing fraternity.