Flintshire bidding to bow out in style 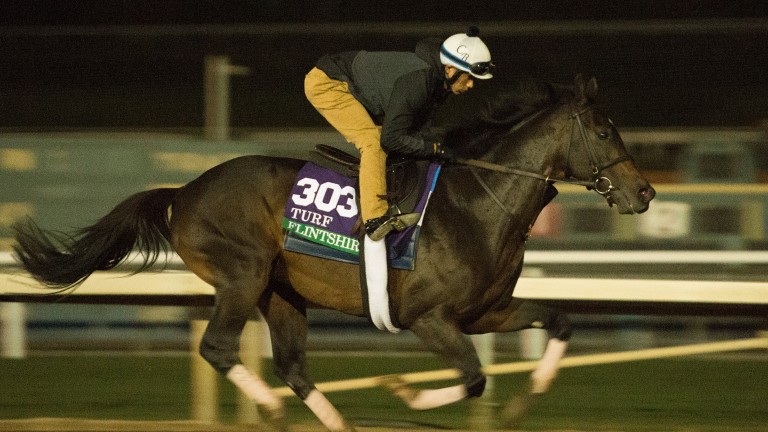 Flintshire exercises on the main track at Santa Anita before this Breeders' Cup Turf bid
Edward Whitaker
1 of 1
By Tom Kerr 6:00PM, NOV 4 2016

Formerly trained by Andre Fabre, Flintshire looks to return to winning ways for new trainer and US turf specialist Chad Brown on what is to be his last appearance before retiring to stud.

Since joining Brown for a summer campaign Flintshire, a two-time Arc runner-up for Fabre, won three races on the trot before suffering a surprise reversal on yielding ground last time at Belmont. The winner there, Ectot, reopposes.

Returning to this far faster surface will play to his strengths – his last five wins have come on firm or good to firm ground.

Owner Khalid Abdullah's racing manager Teddy Grimthorpe said: "He's a hugely important horse for us, he's by Dansili, who is a homebred, and is third-generation Juddmonte-bred.

"He's our leading earner of all time and has been the most genuine, straightforward horse to be around. We're just so proud of him.

"He likes fast ground with a fast pace and if he gets those he's tough to beat."

Grimthorpe added: "Chad wanted to give him a run last time whatever. It would have been nice to win, but once it turned soft we knew it wasn't going to be his day.

"He's relaxed, looks good and happy in himself. The vibes are good, although with these races you've got to be at the top of your game to be competitive."

Flintshire will stand at stud in Kentucky for an international partnership that includes the China Horse Club, which also owns a stake in California Chrome.

Pros Has earned a monster £5,786,144 for good reason – is rarely out the frame and is a frequent winner

FIRST PUBLISHED 6:00PM, NOV 4 2016
He likes fast ground with a fast pace and if he gets those he's tough to beat