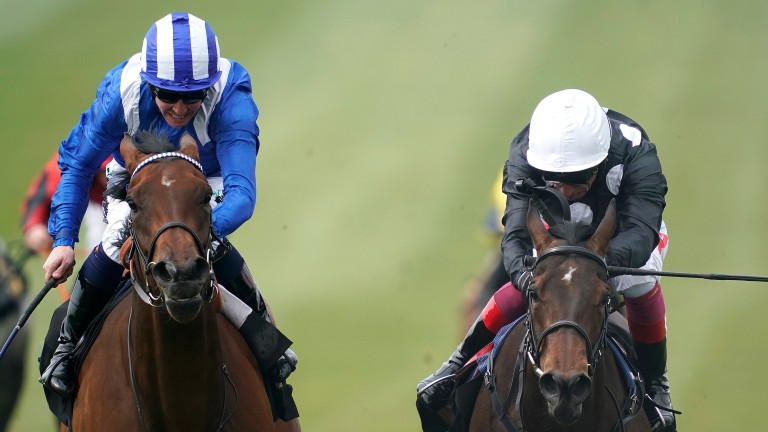 Twist 'N' Shake (right) pushed Maqsad close at Newmarket and then bolted up at Nottingham
Alan Crowhurst
1 of 1
UPDATED 10:01AM, MAY 11 2019

There were five meetings on an extremely busy Friday evening and our reporters have nominated a horse to follow from each fixture.

Pinatubo
7.10 Wolverhampton
Winner, 6f novice stakes
It may have been Pinatubo's debut but the Charlie Appleby-trained two-year-old showed minimal signs of greenness as he powered home to win by an impressive three-and-a-quarter lengths. The son of Shamardal, who is out of French Listed winner Lava Flow, looked an exciting prospect under James Doyle.
Andrew Wilsher

Up Helly Aa
7.35 Cork
Second, 1m2f maiden
Dermot Weld's Brogue really impressed in getting off the mark but there was lots to like about the performance of Up Helly Aa, who finished second. Willie McCreery knows this Galileo colt's family well as he trained the three-year-old's dam Fiesolana, who won the Matron Stakes in 2014. The manner in which the Niarchos debutant finished off his race was very pleasing and he can open his account next time.
Mark Boylan

Twist ‘N’ Shake
7.20 Nottingham
Winner, 1m½f maiden
The Kingman filly already had form in the book strong enough to win an above-average maiden and duly blitzed her Nottingham field to score in great style by seven lengths. Second to Oaks fancy Maqsad on her previous start, bigger targets beckon and she looks a filly who could potentially take aim at something like the Coronation Stakes at Royal Ascot.
Robbie Wilders

Legacy Thor
8.25 Downpatrick
Winner, 2m1½f bumper
Stuart Crawford's charge didn't have to improve from his most recent start at this venue to land the concluding bumper, but it seems he did. The way he travelled and picked up to put the race to bed was in the manner of a progressive young horse and he should be one to look forward to when he starts off over hurdles in the summer.
Justin O'Hanlon

So Near So Farhh
8.30 Ripon
Third, 2m handicap
Many of these had been running over jumps – runner-up Divin Bere was well able over obstacles for both Nicky Henderson and Paul Nicholls – but Mick Channon's third-placed So Near So Farhh has only raced on the Flat. She produced a typically tough performance to finish third given she was one of the first put under serious pressure and could be one to watch out for if going over hurdles in the future, especially considering her stamina-packed pedigree.
Maddy Playle

Track up to 1,000 horses and set email alerts for entries and declarations with the Racing Post Horse Tracker