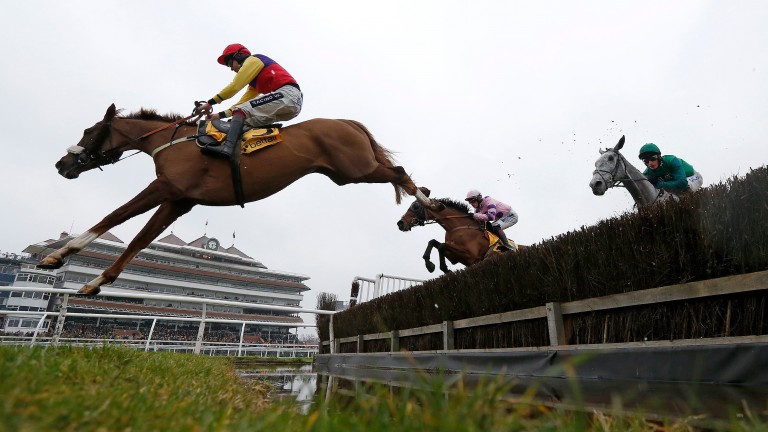 There never was a totally satisfactory Gold Cup between stablemates Kauto Star and Denman with excuses existing one way or another in each of their four clashes - but we might finally find out the answer to that long-debated question this March via their reincarnates.

Fighting out of the Kauto Star corner is Thistlecrack, from the same flashy, makes everything look so easy, speedy school of battering his rivals while Native River is very much from the tough as teak, gallop and jump all day, why use a sledgehammer when you've got dynamite style Denman epitomised.

But on Saturday, in the contest named after Denman, Native River proved he is not just an out and out galloper. In a slowly run tactical affair that should have suited his market rival Bristol De Mai far more, he quickened best to win going away and he ticks every box.

It will be some race.

If Batman was the hero Gotham deserved, but not the one it needed, then a clash between Douvan and Altior in the Champion Chase is the race racing fans deserve, and need!

Instead of trotting around in splendid isolation in their respective non contests two of the sport's biggest superstars should be setting Cheltenham alight in a clash that would be a wonderful test of their talent and create a race in which no-one could be sure of the outcome.

Altior looks a champion in waiting and he should not wait more than five weeks. The rotten luck endured by Mullins this season is a stark reminder of the difficulty of plans a year in the making. Altior has no excuse not to take Douvan on; he's fit, well and jumps for fun. He's already a Champion Chaser - the making's done - so let him run.

3. We're all part of Debra Hamer's black and orange army

To be fair, at the start of the year no-one saw Debra Hamer as one of the key storylines going into the Cheltenham Festival. But her masterful handling of her crack hurdler Tobefair has already captured the hearts and minds of racing fans.

From a mark of 81 he has risen. Seven wins on the bounce later he is favourite for the Pertemps Final. He was raised to a mark of 134, 1lb lower than the cut-off in recent years, after his win at Warwick. It looked like heartache for Hamer, whose career-long ambition has been to have a runner at the festival.

When she said she would not run him again just to try and get in, it looked over. But her wonder horse was having none of it. He came out of his Warwick win bouncing and was well enough in himself for another run. He did what he does best and won - and did so in a manner that suggested the bottom was yet to be struck.

His trainer, her husband, two members of staff and the horse's 18 owners will be joined by a legion of racing fans in roaring him home should he turn for home in contention.

It used to be you didn't need your toes to count the number of winners Nigel Twiston-Davies saddled between the turn of the year and the festival, where he would spring back into life from his deep winter slumber, but these days the man is an unstoppable winning machine all year round.

Big January wins with The New One, Bristol De Mai, Foxtail Hill and Wholestone were followed by three winners on ITV 4's first Saturday in February.

Flying Angel would have a chance in an average Arkle, but an average Arkle this is not. However, an average Supreme this could well be with the first three in the betting holding just four starts between them over hurdles in Britain or Ireland and Defi Du Seuil, who is favourite for the Triumph Hurdle, the only entry to record a Racing Post Rating of 150+ (there were six who achieved that entered last year).

Ballyandy looked the horse Twiston-Davies has always said he is in the Betfair Hurdle, Cheltenham will suit him even more as he proved in the Bumper and off a strong gallop, as he will certainly get in the Supreme, he will almost certainly give connections a shout.

5. The king is dead, long live the king

Willie Mullins really is the Hydra of Closutton. No sooner had the standout Champion Bumper favourite Getabird been ruled out of the Cheltenham Festival than another sprouted in his place in the form of the seriously impressive Naas bumper winner Carter McKay.

That he gave serious weight and an even more serious beating to high-class rivals - West Coast Time, a son of former Champion Bumper runner-up Refinement, was co-second favourite for the festival prior to this - all without coming off the bridle marked him out as a bit special and he looks a very exciting prospect.

FIRST PUBLISHED 1:51PM, FEB 12 2017
Altior has no excuse not to take Douvan on; he's fit, well and jumps for fun. He's already a Champion Chaser - the making's done - so let him run