Five things to look out for on Betway Criterion day 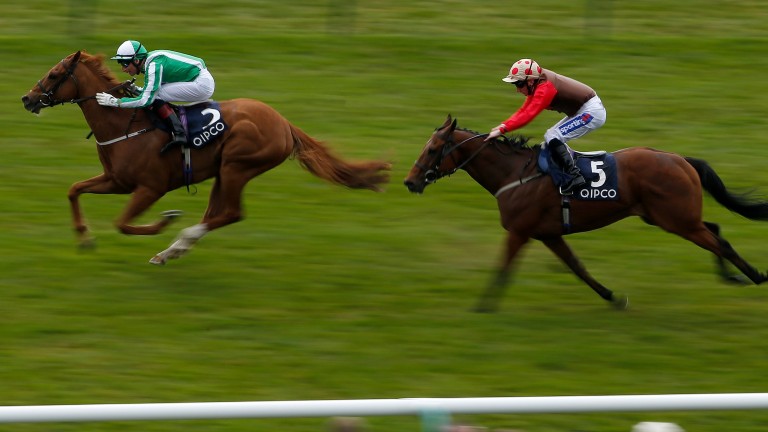 Gerald Mosse showing his winning style on Mr Lupton at Newmarket in May
Alan Crowhurst
1 of 1
By Bruce Jackson 6:00PM, JUN 30 2017

For more than three decades Gerald Mosse has been a success riding around the world – from France to Hong Kong – and, thanks to a retainer with one of Jeremy Noseda’s owners, British racegoers are getting to see more of him this year.

Newmarket racegoers already know his winning style as Mosse, who turned 50 this year, has ridden four winners from just 12 rides on Newmarket’s two undulating and unforgiving courses, yielding a handsome profit for punters.

His agent Shippy Ellis, who has booked his rides in Britain since 1999 when Mosse rode Daliapour to finish second to Oath in the Derby, has found him four more rides to go with the Noseda-trained Winning Ways in the Group 3 Betway Criterion Stakes (3.15).

“Probably his best ride is Italian Heiress for Clive Cox,” said Ellis, who warned that more rain could mean Pavilion, his other ride for Cox, is pulled out of the last.

“He's ridden a winner for Richard Fahey and Maggies Angel in the Empress over six furlongs, which will suit, has a chance in an open race.

“Winning Ways was disappointing at Royal Ascot and is a three-year-old against older horses and with something to find on the ratings in the Criterion.”

Mosse’s other ride is on newcomer Queen Adelaide for in-form trainer John Ryan, who has provided two winners from three rides for the Frenchman this year.

Malik back with no Royal Ascot winners in sight

Name the horse running for the first time in almost a year, having raced against two of last week’s Royal Ascot winners The Tin Man and Ribchester last year.

The answer is Ibn Malik, one of two Hamdan Al Maktoum runners alongside Thikriyaat in the Criterion Stakes.

“They are both high class on their day,” said Angus Gold, the owner’s racing manager. “Ibn Malik has had real problems with his feet and was turned out for three months over the winter.

“He’s only been back in for six weeks but he has got a good race in him.”

Trainer Charlie Hills has been pleased with the four-year-old, also pointing out he goes well fresh “having won first time out at two and three”.

Jim Crowley, the owner’s retained jockey, rides Thikriyaat and Gold added: “He had a publicised heart murmur when disappointing at Goodwood last year. He ran a better race at York second time this year but isn't back to his best yet and Michael feels it's worth dropping him back to this seven furlongs.”

His form suggests he could have been at least placed in the Group 2 Hardwicke at Royal Ascot but connections have waited for a winning opportunity, sticking to a Listed race with Second Step.

Mind you, the Betway Fred Archer Stakes (2.05) has the look of a Group race with the likes of Group 1-raced Midterm and Red Verdon and, as Second Step's trainer Roger Charlton pointed out: "He has to give decent opposition weight (3lb penalty for his Listed win).

"He's progressing well, the course will suit him and he should have a good chance. If they get rain, I don't think easier ground would be a problem."

Second Step was left in the Hardwicke Stakes until declaration day and with Barsanti, third to him in the Tapster at Goodwood previously, finishing second in the race the formbook suggests he would have been involved in the finish.

Trevor Whelan could have been putting his new Flat skills to good use against his fellow jump jockeys in their 5f handicap at York but he is staying loyal to Newmarket trainer John Butler and Jufn, who gave him a first winner on the Flat two weeks ago and carries top weight in the 1m2f handicap (4.55).

Whelan, at Yarmouth on Friday after riding out for William Jarvis in Newmarket in the morning, said: “He got a pretty easy lead at Chepstow but getting his head back in front will have given him confidence.

“It was quick ground at Chepstow but he'll handle a bit of cut no problem,” added Whelan, who rides out at Roger Charlton’s two days a week and has another ride on the Flat for him at Windsor on Sunday.

Angus Gold has seen plenty of class acts in his role as racing manager to owner Sheikh Hamdan Al Maktoum so it is worth noting his thoughts on maiden winner Tajaanus ahead of her run in the Betway Empress Stakes (2.40).

"I was impressed with the way she won," said Gold of her course-and-distance debut win last month that initially bred thoughts of the Albany at Royal Ascot.

"She looked like she had been doing it all her life. She's got a good head on her the way she weaved through like she did to win."

FIRST PUBLISHED 6:00PM, JUN 30 2017
He got a pretty easy lead at Chepstow but getting his head back in front will have given him confidence