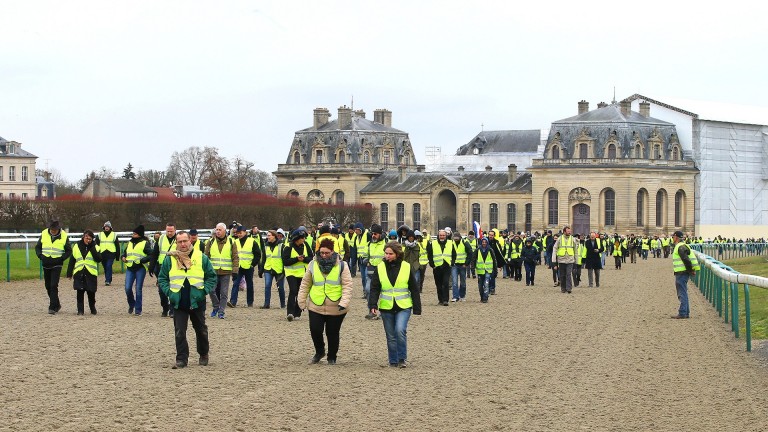 Yellow jacket protesters take to the track at Chantilly on Saturday
1 of 1
By Tony McFadden UPDATED 7:11PM, JAN 12 2019

Five races at Chantilly were postponed until Sunday morning after a large group of protesters occupied the course for more than two hours on Saturday.

A nine-race card had been scheduled but it was possible to run only the first four after the lengthy delay.

Janine Hamilton, travelling head girl for George Baker, was at Chantilly and estimated the group to be 500-strong. She said the protest was not against Chantilly or French racing, but rather part of the 'gilets jaunes', or yellow jackets, which was initially an objection to a proposed rise in the tax on petrol but has developed into a wider anti-government movement and caused major disruption across France in recent weeks.

Hamilton said: "This wasn't at all about racing – it was to do with the problems they're having out here with tax and the standard of living. But it was an unusual venue to use with animals involved.

"The welfare of horses is the most important thing. It was very loud. The protesters had flares, drums and whistles."

Recalling how the incident unfolded, Hamilton said: "They arrived just before the horses were about to go down to post for the first. Initially racing was supposed to be delayed for 30 minutes, but that passed.

"They were nowhere near the horses. But the horses could hear them. They came across the course and congregated near the winning post. It was very loud."

Baker, speaking from Britain, revealed he had been sent a note from France Galop warning disruption was possible. Hamilton said a large police presence arrived at the course to deal with the protesters.

Racing eventually got under way some two and a half hours later than scheduled. Adelante, the Baker-trained filly Hamilton travelled with, finished third in the 6½f maiden.

FIRST PUBLISHED 1:20PM, JAN 12 2019
This wasn't at all about racing ? it was to do with the problems they are having out here with tax and the standard of living