The major talking points in the day's big betting race 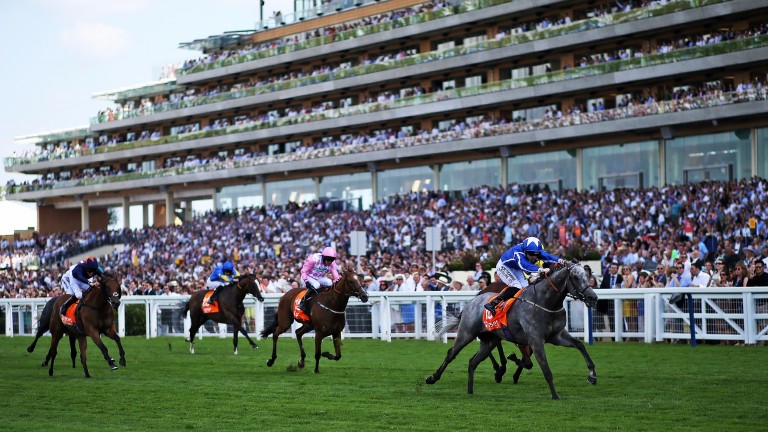 Librisa Breeze, winner of last year's race, is an Ascot specialist like many of these
Alan Crowhurst
1 of 1
By Keith Melrose UPDATED 6:47PM, OCT 6 2017

Good news – halving the course in order to save ground for British Champions Day will mean that this big handicap on Ascot's straight track may not share the main pitfall of its cousins, where any bet can essentially be a coin-flip before the stalls open owing to the fluctuating and often insurmountable draw bias.

Dig a little deeper and there is a suggestion that there may still be an imbalance. There is not a great deal of pace among the 18 runners, and what there is appears to be concentrated among those drawn high.

With the rail to help on that side from stalls to line, the percentage call is that those in higher-numbered boxes – the likes of Mojito, Mjjack and Makzeem – will have any advantage. The first two of those named are among the likelier to be up with the speed.

There are only two course winners in the field, Speculative Bid and Raising Sand, but this field is full of very useful performers, who by definition have been running in good races when they have visited before.

Firmament could be one of the better demonstrations of this phenomenon. He is 0-7 at the track, but four of his seven best efforts on RPRs have come over course and distance, including when he was second to Librisa Breeze in this race 12 months ago.

The 7f handicap at Goodwood on August 26 won by Johnny Barnes keeps cropping up in this race. That is primarily because the first three are all engaged to clash again.

The winner finished sixth in last week's replacement Ayr Gold Cup, while runner-up Burnt Sugar won a top handicap in Ireland on his next start and third-placed Straight Right was making just his second start for trainer Andrew Balding.

The form behind looks pretty handy, too. Fifth-placed Masham Star won his next start and a couple that finished just behind him also placed subsequently.

Much is made of those that have freshly joined David O'Meara's stable and, as a winner of his last two starts in France, Lord Glitters will raise more eyebrows than most. However, note that the strike-rate for horses debuting for O'Meara (13 per cent) is just marginally higher than the stable's overall return of 12 per cent.

John Gosden, trainer of Johnny Barnes
We're rolling him out again after his decent run at Haydock last week and this trip of seven furlongs is more his bag.

Richard Fahey, trainer of Birchwood and Withernsea
Things didn't drop right for Birchwood last time, he was dropped in off a slow pace and the race didn't suit him. He'd previously run well at Goodwood and has an each-way chance. Withernsea loves the track and any rain would help him. He was always on his head in the rearranged Ayr Gold Cup at Haydock last week and the return to seven furlongs will suit him.

Roger Fell, trainer of Burnt Sugar
He's really well and still full of himself. The drying ground will be perfect, he's got good form at Ascot and the jockey has come over from Ireland to ride him because he loved him so much at Leopardstown. The quicker they go the better, but he's got a turn of foot so we won't be put out however it's run.

Roger Charlton, trainer of Makzeem
He's come out of Newmarket very well and was put up 8lb, so he's 2lb well in. We're coming here because it's a nice prize and a good opportunity with his mark, but I'd imagine after this that will be it for the season and we'll come back next year looking at Listed races.

William Haggas, trainer of Mojito
The jockey will have to sort the draw out but Mojito is not very complicated. He doesn't have to be ridden a certain way and he's a nice, improving young horse.

Karl Burke, trainer of Mjjack
He goes there in great form on what's he's done there the last twice and obviously he loves the track. The plan would be to race handy, but he doesn't have to lead.

Jamie Osborne, trainer of Raising Sand
We're relieved that he snuck in at the bottom, as there's a lot of evidence to suggest he's better at Ascot than anywhere else. The winner will be the horse that gets the breaks and, while anyone who thinks they've got the winner of this is over-confident, we think we've got one of those who can win. He's drawn on the wing, which I'd have taken at 9.55 on Thursday when it looked marginal whether he'd get in, and we might have to improvise.

Speculative returns to scene of fiasco

Speculative Bid is a name most punters will be familiar with, even if time has dulled the reasons. Suffix any of ‘farce’, ‘fiasco’, ‘debacle’ or similar to his name and the memory might be jogged.

On Saturday he returns for the first time to the scene of the 2015 episode that established his notoriety when, in the International Stakes on King George day, he ran, then didn’t, then did.

A well-backed 4-1 favourite, he left jockey Jamie Spencer in the stalls and ran loose down Ascot’s straight course. Some bookmakers offered compensation to his backers, others begrudgingly paid out on the weighed-in signal having expected a 20p-in-the-pound Rule 4 deduction.

Then an inquiry was announced that deemed him to have been a non-runner, belatedly triggering such a deduction and a refund for his many backers.

Only 90 minutes later, after the King George had been won by Postponed, was it finally ruled that Speculative Bid had in fact been a runner and that no refunds or deductions were applicable.

Here he runs for just the third time since, having been absent for more than two years since being touched off in a Listed race at York the following month. If he emerges from the stalls with new rider Sean Levey still on his back, it will be a start.

Read exclusive previews of Saturday's action from 6pm on Friday evening on racingpost.com

FIRST PUBLISHED 6:00PM, OCT 6 2017
Ground will be perfect, he's got good form at Ascot and the jockey has come over from Ireland to ride him because he loved him so much at Leopardstown