First Lieutenant back for more as former top-class stayers clash 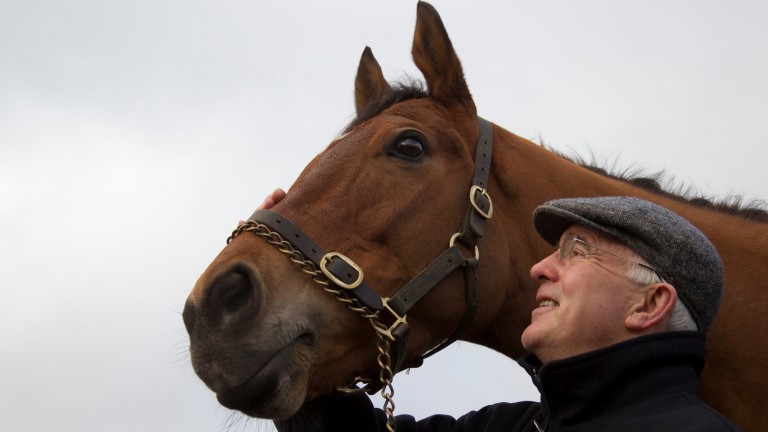 Foxrock and trainer Ted Walsh: the pair will head to Thurles with a big chance on Thursday
Patrick McCann
1 of 1
By David Jennings 3:23PM, JAN 18 2017

Rewind two or three years and this would have looked like a key trial for the Cheltenham Gold Cup.

First Lieutenant, a three-time Grade 1 winner, locking horns with two-time Thyestes winner and 2014 Gold Cup runner-up On His Own. Then there is 2015 Hennessy Gold Cup runner-up Foxrock, and don't forget Salsify, who won the Foxhunter at the Cheltenham Festival in 2012 and 2013. What a tasty treat to finish off a mouthwatering menu at Thurles on Thursday.

First Lieutenant's new career as a hunter chaser did not get off to the start many expected as he had to settle for second in a point-to-point at Aghabullogue this month, but Mouse Morris expects a much-improved showing this time.

The trainer said: "I thought he ran a good race in that point last time but I do think he's improved a nice bit since then. He's still showing me some of his old sparkle."

Foxrock registered his first success since landing the lucrative Leopardstown Chase in January 2015 when destroying his nine rivals in a hunter chase at Down Royal last month, and Ted Walsh is confident of another bold showing.

"If he runs up his mark he should be hard to beat," said the trainer of a horse who, aged nine, has youth on his side in comparison to his three main threats.

The 12-year-old Salsify was last seen finishing fourth to On The Fringe at Punchestown in April, and Rodger Sweeney believes he might need his first start for 265 days.

The trainer said: "He's back but will need the run. He's never lost his fire at home but it's a hell of a race. I'm more pleased with him this year than I was last year."

On His Own was a short head away from winning the 2014 Cheltenham Gold Cup and plenty still argue he ought to have been awarded the race in the stewards' inquiry. He might be 13 now but showed in a point-to-point at Tinahely this month there is plenty of life left in him.

Trainer Willie Mullins said: "On His Own is in good form and he bounced back to form to win a point earlier this month. It looks a very competitive race but he should run well."

The quintet is completed by Ruairis Cloud, trained by Robert Tyner and the mount of Derek O'Connor.