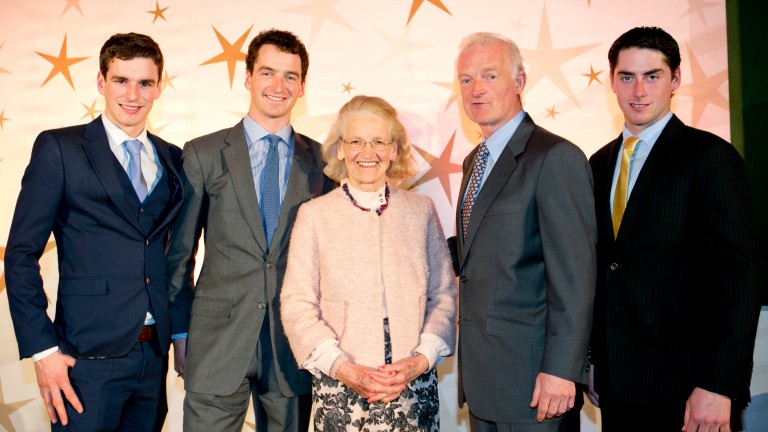 Maureen Mullins received a standing ovation when her name was called as the winner of the contribution to the industry category at the 2016 Horse Racing Ireland Awards at Leopardstown on Monday.

Described by HRI chief executive Brian Kavanagh, who presented the award, as "the first lady of Irish racing", the 87-year-old was recognised for her long involvement in racing, as the wife of legendary trainer Paddy Mullins, mother of ten-time Irish champion jumps trainer Willie, and his brothers Tony, George and Tom, and their sister Sandra.

All of her children rode winners, with Willie being a multiple champion amateur and Tony once sharing the professional jockeys' championship. Maureen Mullins herself boasts a 100 per cent record on the track, winning on her only ride, Razzo Forte, in a female riders' event at Gowran Park in 1982.

Recalling that day, Mullins, who said she was stunned at receiving the award, said: "I remember when we were down at the start and Tony giving the horse a slap on the backside to make sure he jumped off. He did and the rest of the field never saw us."

The matriarch of the Mullins racing dynasty attended her first point-to-point at the age of seven and remains a regular racegoer 80 years on.

With her three sons and one of her grandchildren, Emmet, trainers and three more grandchildren in Danny, Grand National winning-rider David and multiple champion amateur Patrick, all kept busy riding, she retains all her enthusiasm for the sport.

Video clips of family members and racing personalities paying tribute were shown before the presentation, and they highlighted many aspects of her life in racing, including her long-running love affair with the Tote Jackpot.

Her son Tony described his mother as the "real backbone of the whole Mullins story", while senior jumps handicapper Noel O'Brien said: "This girl is a stayer of the highest calibre".