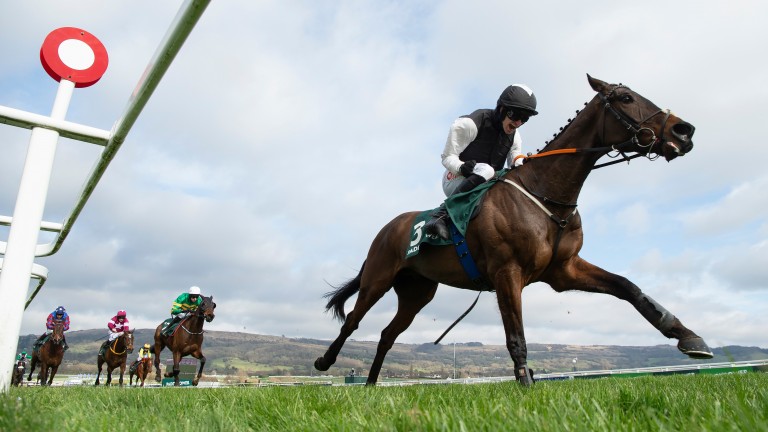 Flooring Porter towers over his rivals in the Stayers' Hurdle
Edward Whitaker (racingpost.com/photos)
1 of 1
By David Jennings UPDATED 6:10PM, MAR 18 2021

The magnitude of this feat should not be swept under the carpet and, when the pubs open again, there will be many a pint sunk by the Flooring Porter syndicate who hail from Ballinasloe in County Galway. Indeed, the colours Danny Mullins wore were picked to resemble a pint of Guinness.

Before we go any further, a shout-out to Jonathan Moore. The jockey who masterminded the miraculous rise through the ranks had to watch on as Danny Mullins celebrated his first Cheltenham Festival winner.

It would have been Moore achieving that feat had he not got a nasty fall from Ujumpthelastuwin at the second-last in a beginners' chase at Naas last Sunday.

Moore explained why he had to accept defeat in his race to be fit for the Thursday showpiece, saying: "I rode out this morning and I wasn't able to stand up right out of my irons. I was too sore. I said to Gavin that I wouldn't be able to do the horse justice and to put Danny Mullins on his back."

Cromwell listened. Mullins was booked immediately and he in turn listened to Moore.

The winning jockey said: "Johnny told me how to ride the horse and gave me every bit of information about him. I’d say two per cent of the success is down to me and 98 per cent is Johnny, Gavin and all the team.

He added: "Johnny was the first man to come and congratulate me and that was a real bittersweet moment for him and a real mark of a solid man to congratulate me first and foremost. I had my feet in the irons but he had done all the work." 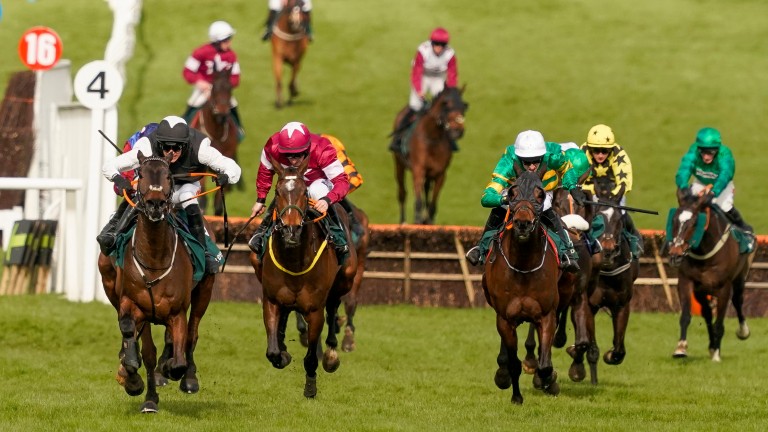 Gavin Cromwell did plenty of the work behind the scenes too and it shouldn't be forgotten that Flooring Porter was a nobody not so long ago. He has been transformed into one of the most impressive winners of the Stayers' Hurdle in recent times by a trainer whose CV is getting bulkier with every passing year.

Cromwell said: "That was a huge performance. Danny [Mullins] gave him a smashing ride. It’s very unfortunate for Johnny that he couldn't ride him.

"Thankfully, and rightfully so, he stood himself down, and he suggested Danny would be well suited to the horse. Johnny has ridden him all along and brought him all the way to here, and it is very unfortunate for him.

"It’s all down to Johnny’s instructions – he’s a quirky ride and he gave Danny plenty of instructions. Hats off to Johnny; so unselfish. I’m very grateful to him.

"He veered a little right when he jumped the last, just where the rail is cut away, and he was basically looking for the rail. When he got the rail he took off again.

"He won a handicap in Navan back in early December. It wasn’t the plan to make the running with him, but he barged his way to the front and won very well on the day. He decided on his tactics, so we went along with that, and it has proved to be the way to ride him."

Since starting to boss things from the front, Flooring Porter has not looked back and seeing off two-time Pertemps Final winner Sire Du Berlais and 2019 Stayers' Hurdle hero Paisley Park in the manner he did was no mean feat.

Mark Walsh thinks the future is bright for the runner-up, who once again proved his love for the New course at Cheltenham.

"This is only his second attempt at Grade 1 level, so it's promising and we can look towards the future with him. We could potentially go to Punchestown next," said Walsh. 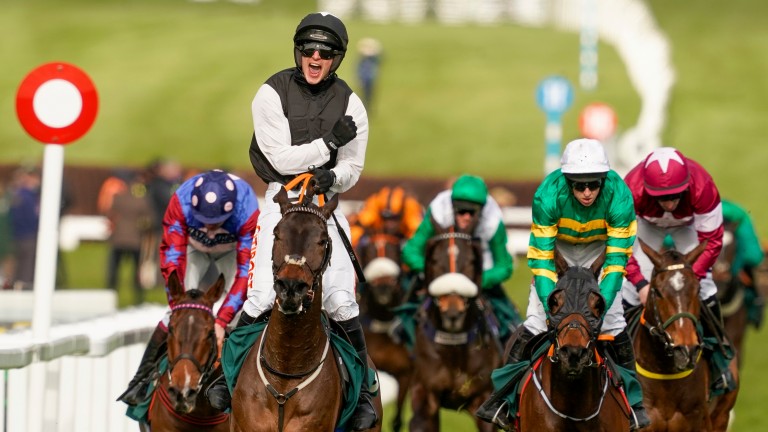 It wasn't to be for Paisley Park either, sent off the 9-4 favourite, as he had to settle for third.

There is a new kid on the Stayers' Hurdle block now. Who would have thought that at Bellewstown in 2019 when he was rated just 95?

Get clued up with the latest Cheltenham Festival tips and odds with our freemicrosite. The bestCheltenham betting advice and exclusive free betting offers all in one place.

FIRST PUBLISHED 3:20PM, MAR 18 2021
I said to Gavin that I wouldn't be able to do that horse justice and to put Danny Mullins up on his back.