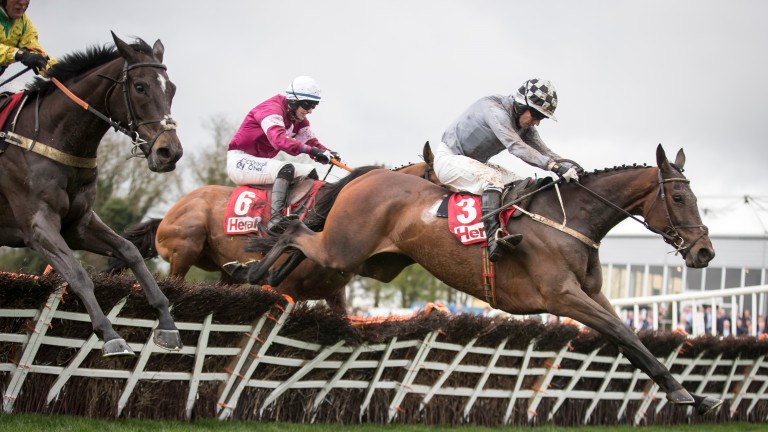 Draconien and Noel Fehily lead over the last at Punchestown on Tuesday
Patrick McCann
1 of 1
By David Jennings UPDATED 6:23PM, APR 24 2018

With Willie Mullins firing bullets from all angles and Gordon Elliott going gung-ho, second and third strings from the top stables were likely to pop up every now again. Little did we think, though, that a fourth string from Closutton at 25-1 would win the first Grade 1 of the Punchestown Festival.

Draconien had a dozen lengths to find with Getabird from their recent Fairyhouse tussle in a Grade 2 and was officially rated 16lb inferior to the 11-10 favourite, but that could not stop him storming to a decisive victory over Vision Des Flos.

Victory came under a Noel Fehily at his most elegant and composed, patiently waiting to pick up the pieces when the pace collapsed.

"Sure everything took me on up front," said an understandably disillusion Paul Townend after Getabird faded into seventh.

That early battle for supremacy set the race up for closers and it was the smooth-travelling Draconien who quickened impressively to hand Mullins a welcome €59,000 cheque in his pursuit of Elliott.

"It looked like there was too much pace up the front for Getabird and everyone took him on. They have all paid the penalty and Draconien came through," said Mullins after the shock success.

"He will probably go to grass now or we might actually bring him back to Paris for something like the Prix La Barka. He is not a horse that's going to take a lot of racing but he's had very little racing this year."

Mullins and title rival Gordon Elliott were responsible for seven of the ten runners and Mengli Khan took third for the pacesetter, snapping up €9,000, but the defending champion also sent out the fourth (Whiskey Sour, €4,000) and sixth (Sharjah, €1,000).

Fehily said: "He ran a nice race the last day on bad ground. Better ground and a better gallop today suited him. Willie just said to get him settled as he can be a bit keen."

Settle him he did and a sweet success followed.

My Sister Sarah and Metaphorical contribute to Wayne Lordan's treble Willie Mullins names the five horses he plans to take to Royal Ascot next week McMahon shows it's not a long way from Clare to here with determined success Gamble landed: Full Noise backed from double-figure prices before 8-11 success Dame De Compagnie bids to sign off in style for Henderson before summer break Ascot and Galway could beckon for Arcadian Sunrise after impressive success