Find out which horses are catching the eye at HQ 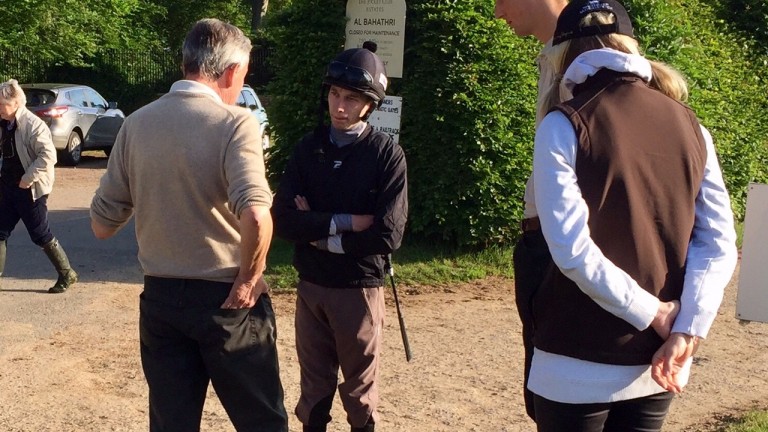 Luca Cumani chats to Luke Morris before his workers headed to the Limekilns
1 of 1
By David Milnes 4:26PM, MAY 24 2017

Journey
John Gosden
God was back in his heaven on the Limekilns on Wednesday morning, where it was access all areas for the first time since April. At 6.30am it was so busy that the trial ground, long gallop, canter and round gallop were all in use simultaneously, which was a challenge for workwatchers to say the least. Gosden's top filly kicked off the action on the latter facility and heads to the Coronation Cup in great order.

Enable
John Gosden
Just nine days before the Oaks, Khalid Abdullah's Chester winner enjoyed a leg stretch in traditional fashion with the same owner's Present Tense on the round gallop. The latter filly, a winner at Yarmouth last time, is shaping nicely as one would expect from a half-sister to the mighty Kingman.

Pleasant Surprise
Luca Cumani
Cumani was waiting on Jamie Spencer before commencing his work on the long gallop, but it was Luke Morris who was in the driving seat where the recent Wolverhampton winner was nicely ahead in a four-horse workout. The daughter of Mastercraftsman could be on a workable mark off 80.

Prize Money
Saeed Bin Suroor
The Stanley House troops were in action a day earlier when only the canter and short gallop were available. Despite having only seven furlongs to play with, Adrian McCarthy sent the Coronation Cup candidate towards the Bury Road traffic lights at a rate of knots.

Alabaster
Sir Mark Prescott
The mile-long Al Bahathri Polytrack, which was installed in 1986, isn't really far enough for the recent Chelmsford winner, who could happily go up it twice such is his stamina. The form of his win at the Essex venue received a boost when the last-placed runner that evening finished third at Beverley last week.

Red Verdon
Ed Dunlop
Dunlop's top work-rider Steve Nicholson was in a hurry on the leading older performer, who needed the run badly at Chester recently after a year off. The son of Lemon Drop Kid may give the returning So Mi Dar something to chew on in the Group 3 Brigadier Gerard Stakes at Sandown on Thursday night.

FIRST PUBLISHED 1:44PM, MAY 24 2017
The trial ground, long gallop, canter and round gallop were all in use simultaneously, which was a challenge for workwatchers to say the least