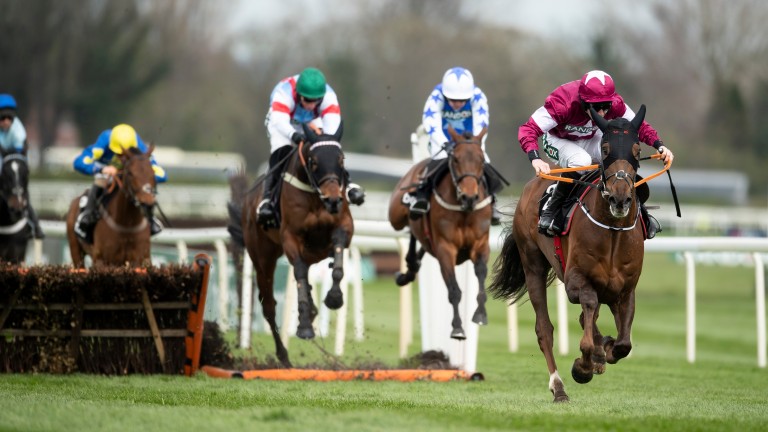 The decision to let Felix Desjy have his own way in front was vindicated in fine fashion as the six-year-old danced to his own tune to secure a maiden Grade 1 success.

Connections were of the opinion Felix Desjy was better off making the running in the Betway Top Novices' Hurdle, rather than being held up, as he was when fifth in the Supreme Novices' Hurdle at Cheltenham, and Jack Kennedy carried out the plan perfectly.

He established a sizeable advantage which, while ultimately whittled down to a length and a half by runner-up Aramon, always looked more than enough on the run-in.

Kennedy, who drew a blank at the Cheltenham Festival but was completing a quick double after Three Musketeers won the opening Grade 3 handicap hurdle, also for Gordon Elliott, said: "I just let my lad rock and roll down to the first and he was happy to lead me off, and it worked out well."

There was one sticky moment for the pairing at the first flight down the back straight, when Felix Desjy took off too early and lost his hind legs, but bar that error the race appeared  in safekeeping a fair way from home, despite Aramon's best efforts.

"He wasn't stopping and stays further than two miles," Kennedy added of Gigginstown House Stud's winner. "I could hear Aramon coming at me in the commentary but I was confident enough he'd keep going, and he dug deep."

For Elliott, on the eve of Tiger Roll's date with destiny in the Randox Health Grand National, to be among the winners was highly encouraging, and he praised Kennedy's efforts

"Jack was good and brave and let him stride along, and if he'd got beaten for doing that he wouldn't be getting the blame," the trainer said. "Jack used his initiative and that's why we use these lads.

"I thought when he won his maiden hurdle he was good and maybe it's hindsight but I'd say we were riding him wrong. Chasing is going to be his game but this was a great run."

Bookmakers cut Felix Desjy to around 16-1 (from 33) for next season's Racing Post Arkle.

An Aintree race often dominated by British trainers had a decidedly Irish feel, as it was Willie Mullins who supplied runner-up Aramon, who had also finished one place behind Felix Desjy in the Supreme.

Rouge Vif just held off Itchy Feet to take third for Harry Whittington, with the pair sporting the colours of owners Kate and Andrew Brooks.

FIRST PUBLISHED 2:31PM, APR 5 2019
He was very game. I could hear Aramon coming at me in the commentary but he kept on going