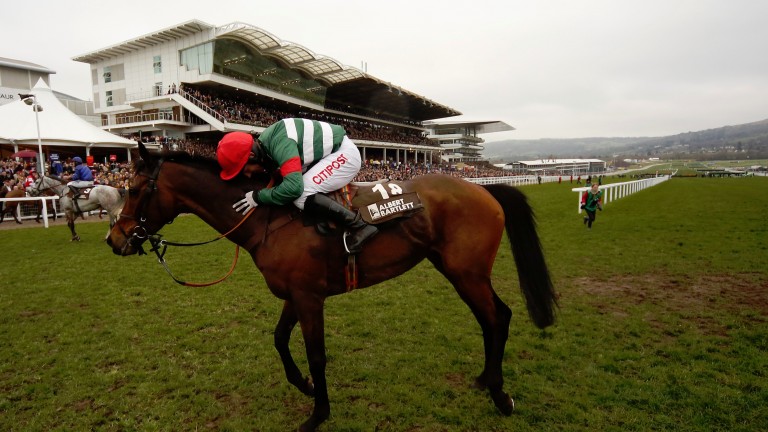 Unowhatimeanharry bids to defend a five-race unbeaten record and become the fourth top-weight to win this race in the past ten years.

The Albert Bartlett winner will again be partnered by Noel Fehily, who has a perfect four-from-four record on the Harry Fry-trained hurdler.

"He is higher in the handicap than last season but did nothing but improve all year and must have a great chance if coming back in the same form," said Fehily.

"I haven't sat on him but have seen him schooling. He looks fantastic and Harry's horses are running well."

Fry faces stern competition from another graduate of Paul Nicholls' Ditcheat operation, Dan Skelton, who saddles Two Taffs. A progressive six-year-old, he cruised to victory at Carlisle two and a half weeks ago in a perfect warm-up for this.

Harry Fry, trainer of Unowhatimeanharry
He has top weight and topweights have done well in the race in the past. He had a fantastic year last year but is starting at a much higher level. He is well at home. It will be no easy task but when we weighed up this race and the Newbury race next Friday, where he would have had a Grade 1 penalty, we decided he should take his chance.

Paul Nicholls, trainer of Caid Du Berlais
He did it well last time. My one concern would be the ground but he's a bit older now.

Dan Skelton, trainer of Two Taffs
He had a great warm-up at Carlisle and we've always had this race in mind. There's no reason why he shouldn't go well.

Philip Hobbs, trainer of Kruzhlinin
I hope he'll come on a bit for his run at Aintree. It's a very valuable prize and the obvious race for him.

Nigel Twiston-Davies, trainer of Ballybolley
He's been really good this autumn and won some good prize-money. We don't quite know how he'll cope with the ground as soft as it's going to be.

Seamus Mullins, trainer of Western Cape
It was a very encouraging first run back of the season at Worcester, which will have brought him on. He should enjoy the trip and the brush hurdles. I'm a little bit wary of the soft ground – his best form is on good to soft or good – but he'll take his chance.

Brian Ellison, trainer of Point The Way
He's in good form and going really well in training. The ground will suit him well and I'm hopeful about his chances.

Nick Gifford, trainer of Theo's Charm
This has been our target since the end of last season. The trip and ground are in our favour so every box in this race is ticked. He's previously won twice on heavy ground so it clearly suits. He's well handicapped and we are very hopeful.

Robin Dickin, trainer of Thomas Crapper
If the ground is very heavy I won't run him as he only ran seven days ago, but if he does run he's well handicapped. I've taken everything off bar the tongue-strap and this is working for him.