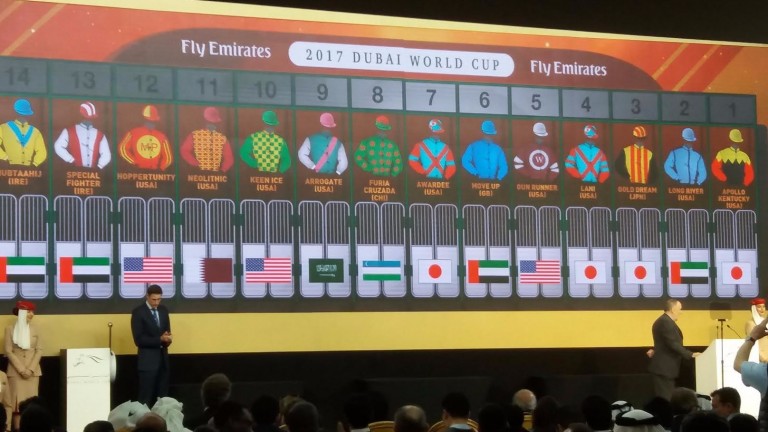 Bob Baffert was in relaxed mood, as he has been since arriving in Dubai, after his World Cup favourite Arrogate was drawn in stall nine of a field of 14 for Saturday’s Emirates Airline-backed $10 million show stopper.

At an effervescent ceremony at Meydan on Wednesday, Baffert also randomly picked stall 12 for stablemate Hoppertunity, with last year’s runner-up Mubtaahij suffering most when draw on the outside in 14.

Baffert, well turned out in customary crisp-white shirt and tinted-blue glasses, was happy to get the latest hurdle out of the way before Saturday’s race, declaring Arrogate to be enjoying life in the desert and looking in top-form for as he tries to stretch his winning run to seven and take his career earning soaring past the £12 million mark.

“I didn’t want the one or the 14 but nine is fine,” said Baffert on the draw. “They still have to break well. The main thing is for him to get away and then after that Mike Smith will decide what he’s going to do. I always leave it up to Mike.”

Coral left Arrogate unchanged as the 1-3 favourite after the draw, with Mubtaahij eased to 9-1 (from 7-1), leaving Gun Runner - drawn in stall five - as the clear second-favourite at 7-1 (from 9-1).

Baffert added: “Everything has gone pretty smooth and we’re just playing the waiting game now the last of the suspense is over. He’s an exceptional horse and the heavy favourite but he still has to have racing luck and it’s not a gimmie.”

Baffert, who won the World Cup with Captain Steve in 2001 and Silver Charm in 1998, stressed on more than one occasion that the start could hold the key to the race, with the memory of Arrogate’s sole defeat - when he started tardily on debut - not far from his thoughts.

He added: “It’s a challenge to come over here. You can have the best horse but they still have to run their best race. The two I won with were both favourites and I know I’ve got a great horse. If he can just repeat his last race or the one before then I know we’re going to be in great shape.

“There’s not a whole lot I can say other than we know what a good horse he is. I just hope he’s within striking distance turning for home. His weapon is his long stride and a mile and a quarter is nothing to him; he likes that.”

Asked if Arrogate, currently rated the world’s best racehorse with a mark of 134, could potentially match Frankel’s record 140-rating before his career is up, Baffert said: “Turf v dirt is so different. Frankel was an incredible horse.

"He was spectacular, but I think this horse is the dirt version in the States of Frankel. It’s pretty amazing that he [Prince Khalid Abdullah] would own both. I remember when American Pharoah retired and I thought it’s going to be tough gap to fill but Arrogate got in those shoes and just kept on going.

“I’m just glad I’m part of the Juddmonte team and to be picked by them makes me feel like perhaps I’m okay as a trainer. It’s a privilege to train for Juddmonte.”

Baffert also warned not to forget about last year’s third Hoppertunity, who is a general 16-1 shot and who he thinks is capable of a similar performance again.

The trainer added: “He always comes away with a piece but it would be nice for him if at some stage he got the whole enchilada. Last year he ran third and I’m hoping he gets a huge cheque.

“The draw is good for him as he likes to be in the clear a little bit. Down the inside you can sometimes get stuck a little bit but he’ll come running, he always does. He’s doing the best he’s ever done but he needs to.”

Last year’s winner Postponed was eased to 7-4 (from 11-8) for Saturday’s $6 million Longines Dubai Sheema Classic after drawing the widest gate in a field of seven.

Despite that setback, trainer Roger Varian was “delighted” with the horse’s appearance after he arrived in Dubai on Wednesday morning, declaring he looked like “a different animal altogether" to the one who suffered a shock defeat at Meydan 18 days ago.

FIRST PUBLISHED 9:13AM, MAR 22 2017
The Bob Baffert-trained colt arrives on the back of victory in the inaugural running of the $12 million Pegasus World Cup