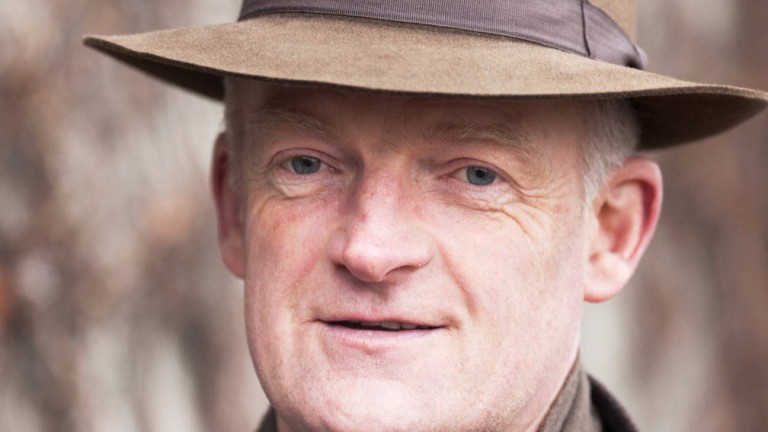 Willie Mullins: holds all the aces ahead of the Morgiana Hurdle
Edward Whitaker (racingpost.com/photos)
1 of 1
By Tony O'Hehir 6:10PM, NOV 15 2016

Willie Mullins holds all the aces for the StanJames.com Morgiana Hurdle at Punchestown on Sunday, but what cards he will play in the Grade 1 event, which he has farmed in recent years, remains a guessing game.

Ireland's champion trainer accounts for seven of the ten entrants – including multiple Grade 1 winners Faugheen, Annie Power, Vroum Vroum Mag and Nichols Canyon – for the two-mile event which he will be attempting to land for the sixth consecutive year.

Mullins said yesterday: "We're keeping all our options open and we'll see how the different horses are before declaration time on Friday. I'd imagine we'll have a few runners as we did last year."

Mullins-trained horses filled the first three places in the race 12 months ago when Nichols Canyon won, handing Faugheen the only defeat of his career.

All but one of Mullins' acceptors, Simenon, are among his 12 entries for the Grade 1 Hatton's Grace Hurdle at Fairyhouse on December 4 and it is likely the 2m4f event will be the target for some of his declared Morgiana horses.

Dual Grade 1 winner Jer's Girl, who was withdrawn from the Lismullen Hurdle at Navan on Sunday due to showing signs of a skin disease she had been treated for, is one who could take on the Mullins team, although trainer Gavin Cromwell indicated on Tuesday that a decision on her participation will probably be delayed until Friday.

He said: "The problem seems to have cleared up but we'll delay a decision for another few days. If we're happy with her then she'll probably run. If we're not, we'll wait for the Hatton's Grace at Fairyhouse two weeks later."

Gordon Elliott described Apple's Jade, a dual Grade 1 winner for Mullins last season but beaten into second place at Down Royal on her first start for Elliott in a four-runner event 12 days ago, as "doubtful" for Sunday's big race.

"I doubt that she'll run but I'll have to talk to Michael and Eddie [O'Leary] before we make a decision," Elliott said.

The Joseph O'Brien-trained Ivanovich Gorbatov, winner of the Triumph Hurdle in March and owned, like Jer's Girl, by JP McManus, is the only other non-Mullins declaration. He was beaten 25 lengths behind De Plotting Shed on his reappearance over 2m4f at Naas ten days ago.

Gigginstown House Stud-owned horses dominate the entries for the two Grade 2 novice chases on Sunday's card, accounting for six of the eight entries – including Identity Thief, who won over course and distance on his debut over fences – for the 2m Ryans Cleaning Craddockstown Chase and seven of the 11 in the 2m6f Florida Pearl Novice Chase.

Kylemore Lough, who won five of his six starts over fences as a novice last season, will represent Kerry Lee in the Grade 2 Clonmel Oil Chase at the County Tipperary track on Thursday.

Lee said: "The Clonmel race is one I've had my eye on for Kylemore Lough for some time. The trip is right and while it's always tricky to get them spot on first time out, I'm very happy with him so far."

FIRST PUBLISHED 6:09PM, NOV 15 2016
We're keeping all our options open and we'll see how the different horses are before declaration time on Friday. I'd imagine we'll have a few runners as we did last year