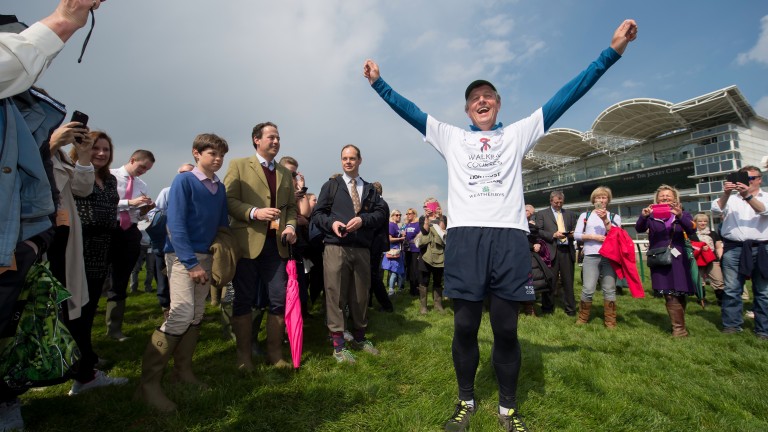 Theresa May might be jealous of Richard Farquhar's support crew during his walking challenge
Edward Whitaker
1 of 1
UPDATED 11:53AM, OCT 9 2017

It has been a tough few days for the prime minister, and talk of letters might bring back some uncomfortable memories – but before an 'F' dropped on stage at this week's Conservative party conference, Theresa May took time out to send a special message to Racing Welfare trustee Richard Farquhar.

The PM wrote to congratulate Farquhar on being named the UK's 792nd Point of Light, a title recognising volunteers who strive to make a difference in their communities. Farquhar hit the headlines last year when walking between all 60 of Britain's racecourses to raise money for Pancreatic Cancer UK and Racing Welfare.

May wrote: "Through Walking the Courses you have created a deeply personal and innovative fundraising method for the two causes that you care about most. Walking the length of Britain's 60 racecourses is a truly unique achievement and I wish you all the best on your continued efforts to support Pancreatic Cancer UK and Racing Welfare.

"Up and down the UK volunteers like you are helping to build a country that works for everyone. The Points of Light award is a small thank you on behalf of the whole country, in recognition of your exceptional service."

Tweeting a copy of the letter, signed by May, Farquhar wrote: "What an honour to receive this award from @Number10gov for @WalkTheCourses on behalf of @Racingwelfare & @PancreaticCanUK! Thrilled & proud."

Blast from the past for Frankie

Going head to head is nothing new for Frankie Dettori and Jim Crowley – but they don't normally have Clare Balding as a mediator. However, in a return to familiar pastures for Dettori, the pair will be taking part in Newmarket's Question of Sport next month in a bid to raise money for the Multiple Sclerosis Society Cambridge Centre for Myelin Repair. 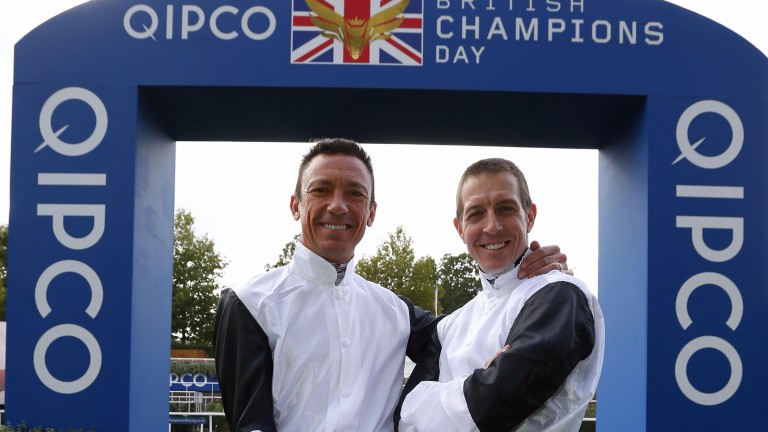 In addition to the clash of the sports stars, guests have the opportunity to enjoy a three-course meal after the quiz from 8.30pm. Doors open at 6pm, followed by the quiz from 7-8pm.

The MS Society Cambridge Centre for Myelin Repair was founded in 2005, with the aim of developing treatments for people with MS. The centre is now a world-class research facility.

The Thoroughbred Health Network, a free online educational initiative, has recently been granted charitable status – just a few months after it was launched nationwide.

The organisation, which aims to optimise the health of racehorses (and other equines) through a network of industry partners, launched as a regional pilot scheme in June 2015, but was unveiled across Britain in March.

Key to the charity is its invaluable online resource centre, which provides information on a wide variety of common equine disorders, also translating the latest veterinary research into tips to maximise the health of horses in training. A traffic light coded system enables trainers to assess the strength of the scientific evidence available for different treatment options.

The website is free to subscribe to, with members receiving regular updates on the latest research alongside the resources available online. Click here for more information.

In case you missed it, Isaac Bell finally broke his maiden on the Flat this week – aged nine and at 100-1. The gelding, trained by Alex Hales, had been plying his trade over obstacles – winning most recently in November 2015 – but took to Kempton’s all-weather like a duck to water, scoring by a neck under Luke Morris. While Hales had not backed his charge, owners Steve Brown and David Raftery had!

FIRST PUBLISHED 6:00PM, OCT 7 2017
Up and down the UK volunteers like you are helping to build a country the works for everyone