Farewell To A Champion LOOKING BACK 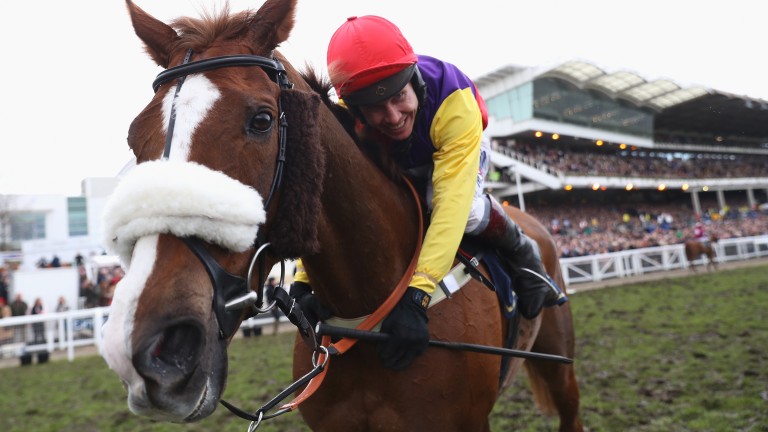 During a career spanning nearly 30 years, Richard Johnson rode over 3,800 winners, and among that amazing haul were some tremendous rides. Here is a selection of ten of his best winners. . .

"Anzum driven for dear life," said Simon Holt at the top of the hill, with still two to jump, a long way to run and Johnson's mount eighth, looking every inch a 40-1 shot. Irish banker Le Coudray surged into a clear lead halfway up the run-in, the race apparently won, but Johnson had never stopped kicking and driving on Anzum, and now he threw in the kitchen sink as well. Dramatically, thrillingly, Anzum got up by a neck in one of Cheltenham's best finishes. It was the first of Johnson's 23 festival winners and none was more richly deserved, nor as hard earned.

This talented two-miler was brilliant and athletic yet also lazy, fragile and error-prone. He needed the right handling and Johnson took firm control to deliver this crowning glory. Lethargic and lackadaisical, Flagship Uberalles looked anything but a 7-4 shot for most of the way and a bad mistake three out seemed the final straw, but Johnson never gave up. He worked for all he was worth on the tiring ground, driving himself to the point of exhaustion as he roused his mount to a three-length win. 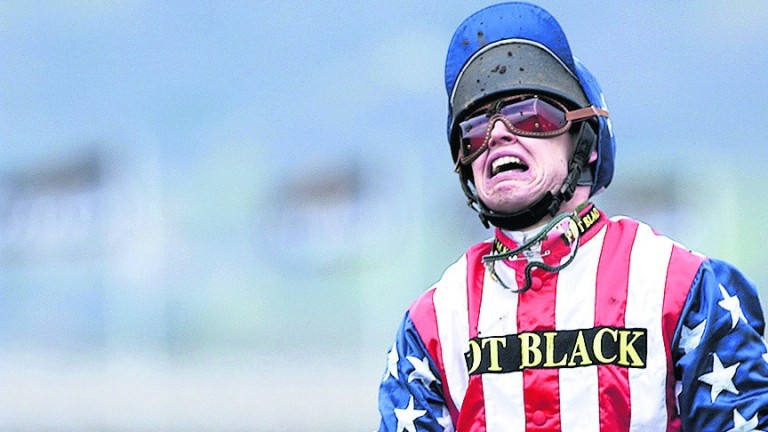 Mr R Johnson (7) was a virtual unknown when he approached the last well clear on Sandybraes. His experienced mount clouted the fence and left Johnson hanging upside down around his neck with both legs on the same side of the horse. The then 17-year-old amateur's innate horsemanship kicked in, however, and he won by seven lengths after what the Racing Post's in-running comment described as "a brilliant recovery". This was only his fifth winner but already the qualities that would take him to another 2,995 were evident.

If there are two types of jump jockey – strong and forceful, or quiet and patient – Johnson has the rare ability to be both, and he showed it here. Last as the 27 runners jumped off, Johnson was "so far back I thought it was ludicrous," according to trainer Philip Hobbs, but stealthily crept closer until arriving in the front rank with Monkerhostin full of running. He waited, taking a lead until the home turn, then drove for home. Stealth now gave way to strength as Johnson held off the close attentions of Court Shareef to score by a length in a brilliant demonstration of big-handicap mastery.

It was probably no coincidence that Johnson's pair of winners at the 2014 festival came in two of the closest finishes – by a short head on Balthazar King in the 3m6f Cross Country Chase and by a nose here – because when push comes to shove there is no-one better at getting his mounts over the line. This one was so tight that Paul Nicholls, trainer of runner-up Southfield Theatre, thought it was a dead-heat, but Johnson, seemingly set for an easier victory until a mistake at the last, clawed back the deficit all the way up the hill and just got up. Dogged, determined and decisive. 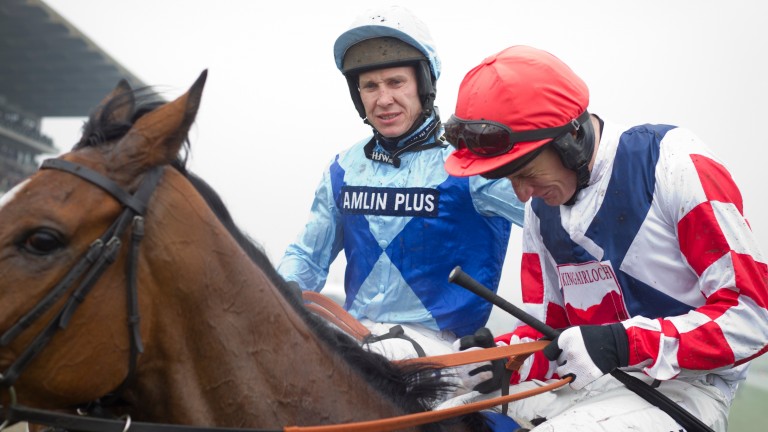 Far from euphoric in victory, Johnson is quick to console a devastated Daryl Jacob after he and Fingal Bay narrowly denied Jacob on Southfield Theatre in the 2014 Pertemps Final
Patrick McCann

There is probably no such thing as a bad winning ride in a Gold Cup but what marked Johnson's first success out was the context of the race. Johnson had never ridden the Noel Chance-trained chaser in public and was up against the classy Florida Pearl, partnered by Paul Carberry, a jockey with first-hand festival-winning knowledge of Looks Like Trouble from the previous year's Royal & Sun Alliance Chase. Johnson never let the classy novice Gloria Victis have too much peace up front, while making use of Looks Like Trouble's cruising speed and stamina to draw the sting from Florida Pearl and the previous year's Gold Cup winner See More Business. The plan worked beautifully as Looks Like Trouble drew away after the last to defeat Florida Pearl by five lengths.

The surest way to get a horse with superior stamina beaten at Cheltenham is to go too fast up front. It is less the exact fractions so much as the rhythm of the race which tells: too hard and the stout stayer will be taken out of their comfort zone; too lenient a tempo and the rival with more natural speed will still be there to sprint past at the end. The match between Native River – a Welsh National winner – and Might Bite was a perfect example of two jockeys, Johnson and Nico de Boinville, riding their respective mounts to their optimum. The pair were still locked together jumping the last but Native River was four and a half lengths clear at the line, vindicating Johnson's skill and the horse's own courage on the biggest stage of all.

Johnson has his name inscribed in the record books for his five wins in this race, three of them for his longest partner-in-crime Philip Hobbs. But if there was ever a performance around Kempton’s rhythm-sapping jumping test to remember, it was Johnson's swashbuckling assault on the Martin Pipe-trained Gloria Victis. Saddled with top weight in what is supposed to be one of the most competitive handicaps of the winter, Gloria Victis was making just his fourth start over British fences, with Johnson standing in for suspended regular partner Sir Anthony McCoy. A pressure situation? Johnson set out to run his rivals into the ground and, on the occasions when the long-striding Gloria Victis met one wrong, never took a step backwards. 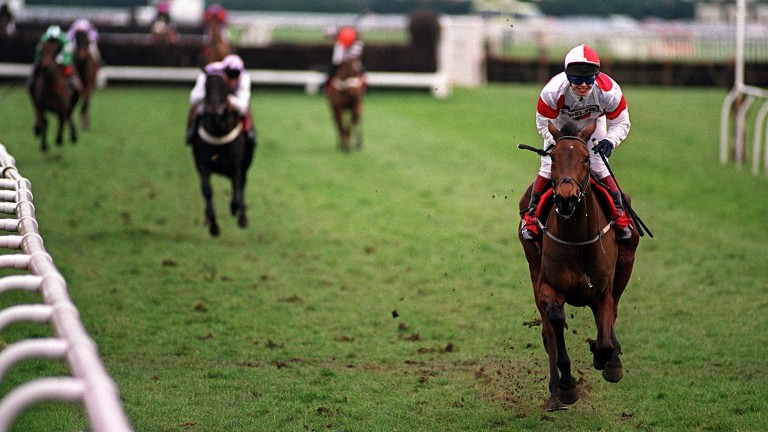 Grahame and Diana Whateley's grand servant might be best remembered for his exploits over fences, notably his four wins on Sandown's finale card. But his defeat of a McCoy-inspired Get Me Out Of Here and Irish banker Dunguib in the 2010 festival curtain-raiser showcased both Johnson's sense of timing as well as his undoubted toughness in a finish. Having hugged the rail throughout, Johnson moved Menorah up to dispute the lead running down the hill between the third- and second-last flights before stealing a crucial advantage rounding the home turn which proved to be the race-winning move.

For all his exploits at Cheltenham and Aintree, Balthazar King's two wins at Craon in western France – arguably the biggest jumping test anywhere in Europe bar possibly the Pardubice – stand out. Having landed the prize in 2013 on only Johnson's third ride in France, Balthazar King returned a year later off the back of an unlucky fall in the Prix Anjou Loire Challenge and, though showing his usual cat-like agility over the hugely varied obstacles, never travelled with his usual fluency. Turning back towards the stands for the final time Johnson was pushing away in fifth, while the French commentator intoned with an air of disbelief: "Balthazar King seems beaten." Johnson pulled his mount to the outside before conjuring a remarkable surge, passing his four rivals in the space of barely half a furlong either side of the final fence to win eased down.

Johnson failed to complete the National on each of his first five attempts but, if ever there was a losing ride that went beyond reproach, it was his runner-up effort aboard What's Up Boys behind Bindaree.

Johnson had barely five runners left behind him going out on the second circuit before making notable headway on the run down to Becher's Brook second time. 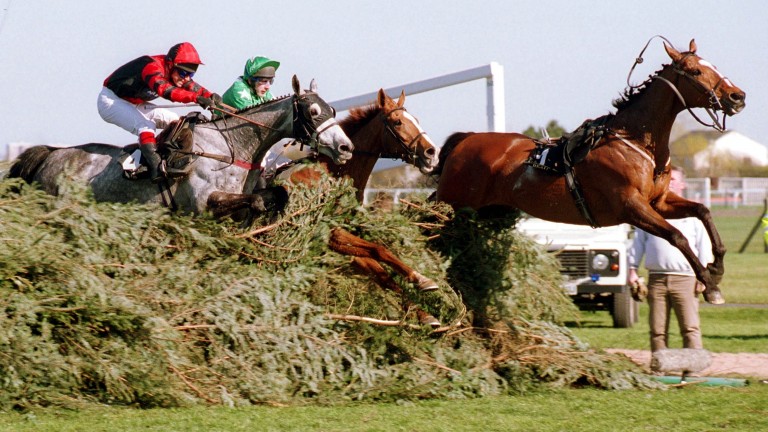 What's Up Boys emerged as a serious challenger to Bindaree after the Canal Turn and Johnson's decision to steer a wide course on the run back to the racecourse proper saved him from being caught in a melee four out which claimed the well-backed Ad Hoc and Davids Lad among four casualties.

Under pressure approaching two out and conceding 16lb to the winner, Johnson elicited a superb response from What's Up Boys, who led narrowly to the Elbow and never stopped responding to his partner's urgings, going down to the most gallant of length and three-quarter defeats.

FIRST PUBLISHED 2:00PM, APR 4 2021
Johnson was hanging upside down around his neck with both legs on one side of the horse. The then 17-year-old amateur's innate horsemanship kicked in