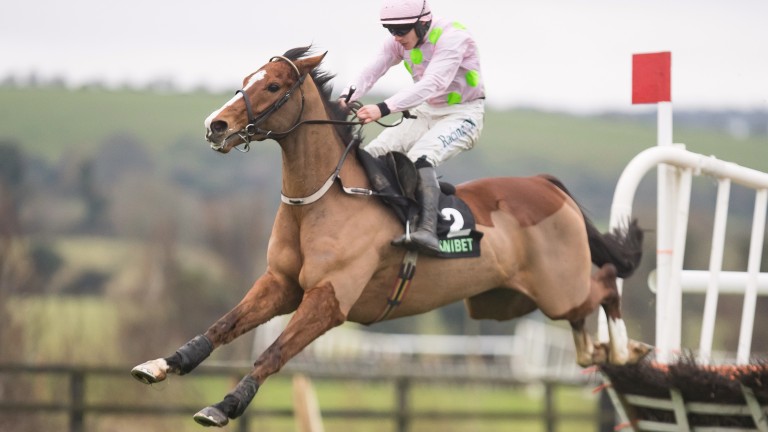 Who knew digging up the past could tell us so much about the future?

In one fell swoop Faugheen soared to the same stratosphere he departed from 665 days ago at Leopardstown and is now no bigger than 5-2 favourite with the sponsors for the Unibet Champion Hurdle. Same as it ever was.

The injured Ruby Walsh could not ride and owner Rich Ricci could not watch, but Sunday's Morgiana Hurdle turned out to be one of the most straightforward of Faugheen's 13 wins to date, with the 16-length winning margin over Jezki the widest since he destroyed Josses Hill by 22 lengths in his bumper at the track in 2013.

This was Faugheen at his most flawless.

Ricci, whose horse had started the day a general 6-1 chance for the Champion Hurdle, said: "I didn't watch it. I couldn't watch it. I just listened. Jeez, it's good to have him back, isn't it? I cannot wait to watch the replay now."

The replay would have made for very pleasant viewing indeed. 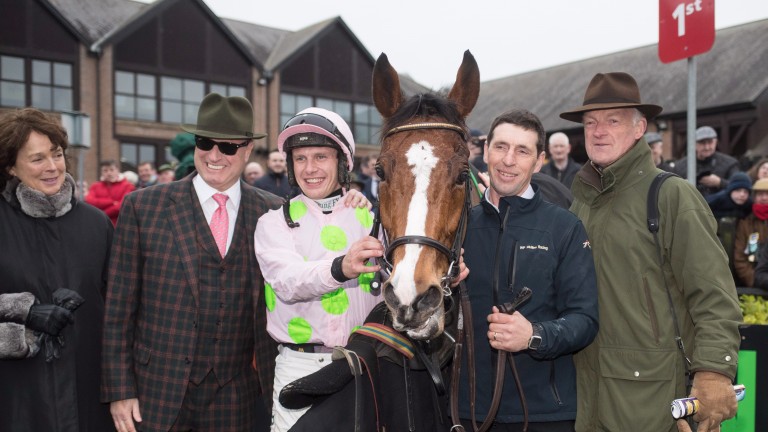 Connections are all smiles after Faugheen's return win in the Morgiana
Patrick McCann (racingpost.com/photos)

Paul Townend, a late replacement for Walsh, who is nursing a broken leg after a fall from Let's Dance at the course on Saturday, sent Faugheen straight to the front and he dominated from start to finish.

A slight scare at the fourth-last and a sloppy leap at the last were the only blemishes during a relentless round of galloping from the nine-year-old, who received a rousing reception from the Punchestown crowd on returning to the winner's enclosure.

"Hurricane Fly was a smaller, more compact, sharper horse but this lad devours the ground," said Townend. "It was a fair buzz. He's the real deal all right."

His smile told you more than words ever could.

Willie Mullins had hinted Faugheen had been showing him the right signs at home and he was thrilled to see him bring that home work to the track.

The trainer said: "It was very good, I'm very pleased with that. The horse did all the talking out there today.

"I have been doing the talking up to now and you have all seen what I was saying. I don't know what I want to do now, I'm just happy to get today over with. We'll go home and hopefully he'll be all right in the morning.

"He just jumped out and took the race from them. He was ready just after Punchestown in the spring. He's been ready all along. He was like that in May and early June.

Loads in the tank

"He's been very good at home and we've not had any setbacks. He had tons in the tank. That was great to see."

The Champion Hurdle, which looked wide open before the Morgiana, with most firms going at least 7-2 the field, now appears a little less so. Buveur D'Air was eased to 4-1, and it is 9-1 bar the two with Betfair Sportsbook.

"I'm not that keen on too many runs before Cheltenham," added Ricci. "The Irish Champion Hurdle will certainly be on the menu.

"It was tough on Ruby today. He'd looked forward to this ride for so long. We've planned this day since the spring so it was very tough on him."

Mark Walsh, who was on board Jezki, felt Faugheen was every bit as good as when we last saw him.

"We went a proper gallop and it rode like a proper race," he said. "Jezki ran his race but Faugheen is as good as ever."

The two up-and-comers in the line-up were firmly put in their places. Swamp Fox was third, 53 lengths behind Faugheen, while Campeador was well and truly cooked when coming down at the last for the third time in his last four starts. It was a culture shock for both.

To be fair, it's a culture shock for most when they fight Faugheen, and he once again has just about every other Champion Hurdle contender on the ropes.

The more things change, the more they stay the same.

FIRST PUBLISHED 2:25PM, NOV 19 2017
Hurricane Fly was a smaller, more compact, sharper horse but this lad devours the ground. It was a fair buzz. He is the real deal all right