Fans in thrall to mesmerising Moore after Tokyo six-timer 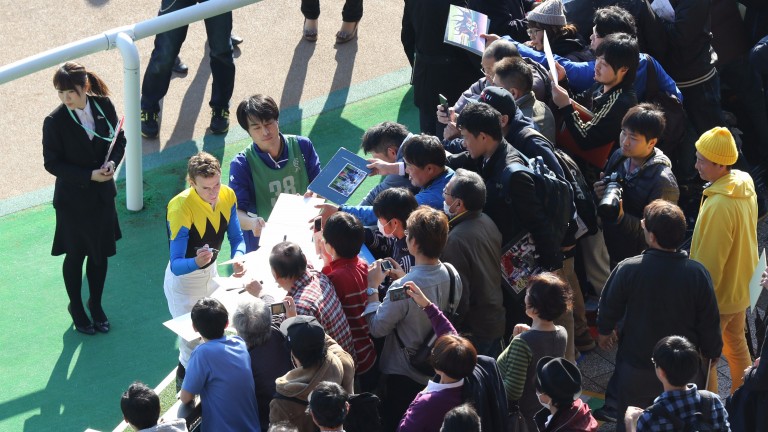 Ryan Moore signing autographs for fans after riding his fifth winner of the day at Tokyo on Saturday
briensphoto.com
1 of 1
UPDATED 11:11AM, NOV 25 2017

When Idaho steps on to the Tokyo track on Sunday he will have the benefit of a jockey at the very top of his game after Ryan Moore picked up a remarkable six wins from eight rides here on Saturday.

Not that it was the scale of his dominance on the day that marked Moore's achievement so much as the inexorable, inevitable way he drove one after another to make that last effort.

Ever since his first successful raids with Snow Fairy, Moore has increasingly made Japan an important part of his year and when he landed the opening 7f maiden on Rapier Wit for his most ardent supporter in the country, Noriyuki Hori, it brought up a 100th win in Japan. 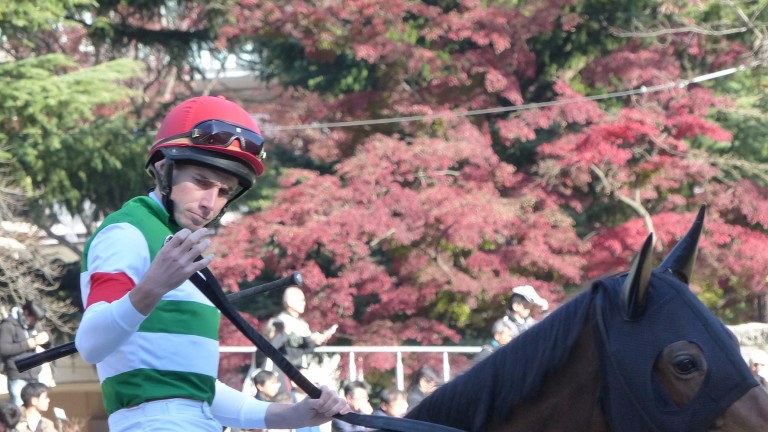 Ryan Moore warmed up for the ride on Idaho in the Japan Cup with a six-timer at Tokyo on Saturday
Racing Post / Scott Burton
"I've been lucky to ride some of the best horses of my career in Japan, horses like Maurice, Gentildonna and Real Steel," Moore said.

When asked if he had any message for a crowd, which swelled to an impressive 34,370 on a day with no Group 1 action and which serves very much as the appetiser for Sunday's Japan Cup, he added: "Thanks for coming out and thanks for the support."

That first win came at 9.50am local time but Moore's grip on the day was only slowly tightened, with just Dark Night Moon's success in the third adding to his tally before midday.

Then again, that period featured no ride for him in the second and the sole jumps race on the card coming fourth up, followed by a 50-minute pause for lunch.

Among the raft of two-year-old races on the card the debut of Arusha in the fifth race had been much anticipated on account of her regal breeding.

But the daughter of Deep Impact and the Grade 1-winning mare Zazu was unable to reel in Palmaria under a simple but brilliantly effective ride from Moore. 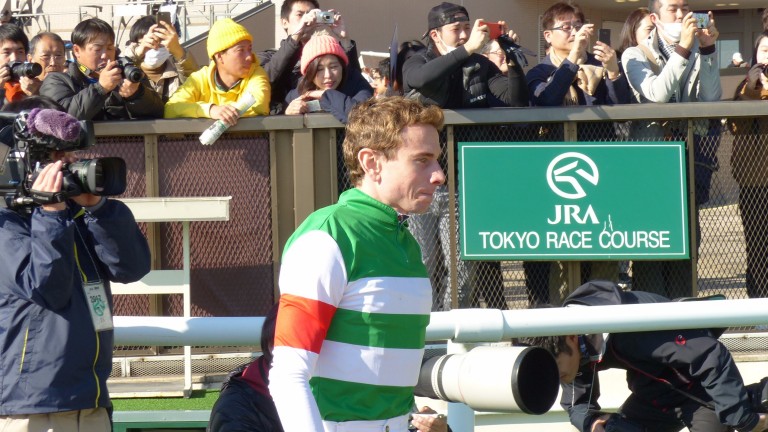 Ryan Moore after riding Corcovado to success at Tokyo on Saturday
Racing Post / Scott Burton
The same mile-and-a-half start from in front of the stands that will launch the Japan Cup to a mighty roar was in action for race seven, with Moore driving home Corcovado down the middle of the track for a first win since October last year.

Again fans lined the walkway coming up from the tunnel system that acts as the track's traffic flow and loudly cheered their hero's name as Moore came up to the winner's circle for the presentation ceremony, bowing slightly but frequently.

By now the script was set and, having thrown everything at Foggy Night to claim a gruelling success in a special allowance race over a mile on the dirt, Moore spent at least ten minutes signing autographs on his way back to the jockeys' room.

He appears no more at ease with his public duties in Japan than elsewhere but, in a culture that places plenty of value on virtues such as hard work and humility, he is a natural role model, while there was sincerity in Moore's thank-you. 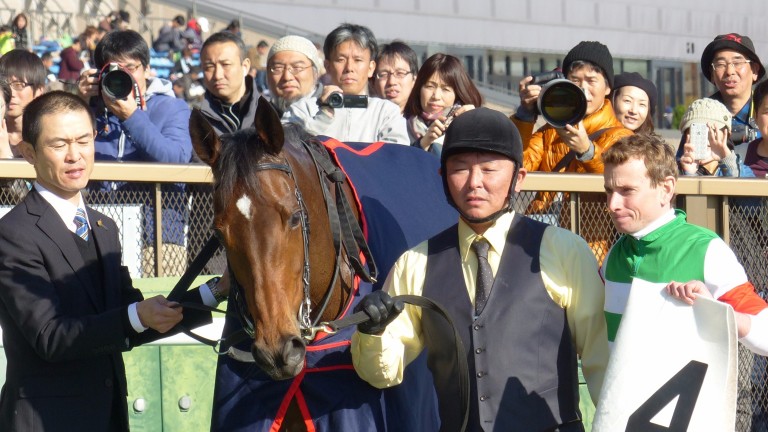 Ryan Moore after Corcovado became leg four of a six-timer at Tokyo on Saturday
When Alla Salute just beat Almirena and Christophe Lemaire in the final act of the day – one run more than six hours after the opener –  the masterclass was complete.

Gentildonna's win in the 2013 Japan Cup was a significant one in the race's history –  she remains the only horse to lift the prize on two occasions –  but also for Moore.

There are not too many major world races where Aidan O'Brien has to defer almost completely to his retained rider in terms of experience, but it is long odds-on that Moore was integral to selecting Idaho as a suitable candidate for the Japan Cup.

He will be realistic about the challenge posed by Kitasan Black, Satono Crown and the rest. But you can also bet that it will be the rest of the weighing room that will be worrying about what he might do on Sunday, and not the other way round.

FIRST PUBLISHED 9:33AM, NOV 25 2017
I've been lucky to ride some of the best horses of my career in Japan, horses like Maurice, Gentildonna, Real Steel

Listed success for Katara rounds off a memorable weekend for Ryan Moore Ascot collector's item as Dettori's flying dismount outshone by tearful groom Four things we learned on the fifth and final day at Royal Ascot And you thought finding the Royal Hunt Cup winner was hard . . . 'There is no denying the phenomenal training that has gone into Rohaan' Ascot due a fitting finale with racing's greatest fan set to star on day five