Latest HORSE OF THE YEAR 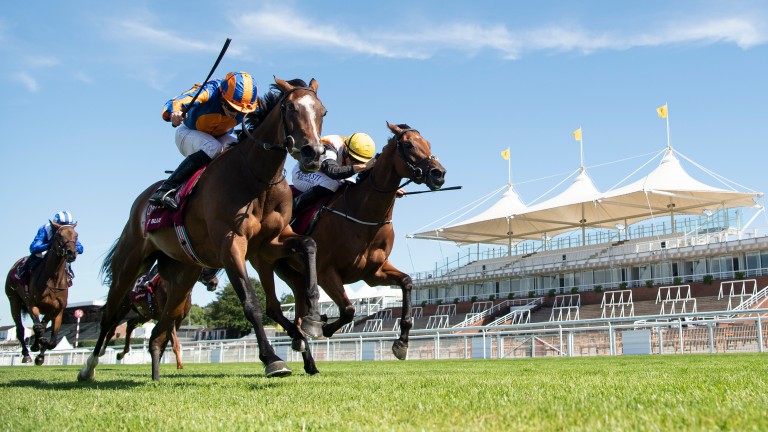 Fancy Blue: landed her second Group 1 success in the Nassau Stakes
Edward Whitaker
1 of 1
By James Stevens 7:00AM, AUG 5 2020

Fancy Blue has moved to the top of the Cartier Horse of the Year standings following her second Group 1 success of the season in the Qatar Nassau Stakes at Glorious Goodwood.

Donnacha O'Brien's three-year-old has earned 80 points this season, with her Goodwood victory following on from last month's narrow win in the Prix de Diane. She finished second in the Irish 1,000 Guineas at the start of the season.

She leads by eight points ahead of outstanding stayer Stradivarius, who raised his tally to 72 points with a commanding victory in the Al Shaqab Goodwood Cup last week. He shares second spot with French-trained Way To Paris, winner of the Grand Prix de Saint-Cloud and Grand Prix de Chantilly this season.

Other contenders for the prestigious prize include Ghaiyyath (70) and Barney Roy (68), while Addeybb, Love and Magical are all on 64 points.

No horse has ever captured the Horse of the Year prize three times, but Enable made her first claim for history with success in the King George VI and Queen Elizabeth Qipco Stakes.

Fancy Blue is also now top of the three-year-old filly leaderboard, with the exceptional Oaks winner Love as her nearest challenger.

Elsewhere at Goodwood, Battaash extended his advantage in the race to be named sprinter of the year. Charlie Hills's six-year-old set a course record with his impressive fourth consecutive success in the King George Qatar Stakes on Friday.

Stradivarius’s win established his dominance in the race to be named top stayer. He leads ahead of Nayef Road, who has finished second behind John Gosden’s star in the Gold Cup at Ascot and again at Goodwood last week.

The Cartier Horse of the Year award is based on points achieved throughout the season, opinions from a panel of racing journalists and handicappers and a vote from Racing Post readers and ITV viewers.

There will be no official ceremony this year, due to the coronavirus pandemic, but awards will be given out in November.

FIRST PUBLISHED 7:00AM, AUG 5 2020
She leads by eight points ahead of outstanding stayer Stradivarius, who raised his tally to 72 points with a commanding victory in the Goodwood Cup

O'Leary invests in Elliott again - but insists Gigginstown is still winding down Cheltenham hero set to return in race won by Envoi Allen, Samcro and Delta Work Hurdling star Paisley Park back at Wetherby as Lavelle ponders chasing option PJA denies jockeys 'culture of silence' claim and demands end to bullying case 'For how many more weeks might we be drip-fed material calculated to shock?' Eight winners of the one-off Betting Shop Champions Awards revealed