Familiar faces and figures on show in Southwell stormer 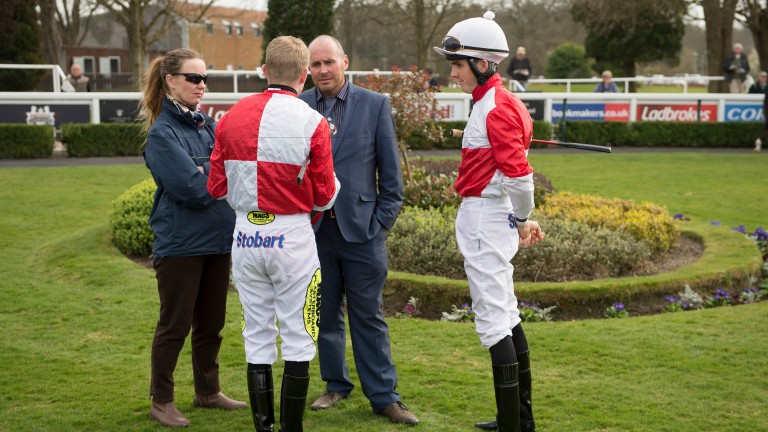 Stephen Arnold's colours will be on display on Tuesday
Edward Whitaker
1 of 1
By David Ashforth 5:19PM, JAN 10 2017

A small race can be fascinating. Consider the “Hands and Heels” Apprentice Handicap at Southwell (12.45). It’s always interesting to see how effective different apprentices are when not resorting to the whip (sometimes more effective than when resorting to it) but this race has other interests too.

Heading the field is the familiar figure of Bapak Bangsawan, bred by the Sultan of Pahang but destined never to be nearer Malaysia than Southwell. After winning three races for the Sultan, from Kevin Ryan’s yard, Bapak Bangsawan was bought by Ann Stokell for the unprincely sum of £800. Now a seven-year-old, Bapak Bangsawan has since won three more times.

What is unique today is that Stokell, who has ridden the horse herself on all 37 outings since she bought him, has put Bapak Bangsawan in a race she is not eligible to ride in. Jane Elliott, who has looked promising, has been honoured with the ride.

In company with several of his rivals, Bapak Bangsawan has been heavily raced. Rated 71 on the all-weather a year ago he is now down to 54, the result of still starting quickly but nowadays tending to finish slowly. This is his best chance for a while.

Everything in the headwear department has been tried on Bapak Bangsawan – hood, tongue tie, visor, blinkers, eyeshield. On Tuesday the combination of eyeshield and blinkers makes its second appearance.

While he blasts off from the far side, Swendab, wearing hood and blinkers, will doubtless do the same on the stands side. This is a unique occasion for Swendab, too. The nine-year-old has won 10 of his 91 races but this is his first appearance at Southwell. It’s quite late to be finding out whether or not Fibresand suits him but having gone 18 races and 17 months since his last win, it’s worth a try.

Kodimoor (tongue tie and blinkers) never has won a race but came close when beaten a head at Catterick in October and has finished second again since. It would be nice if he won because trainer Christopher Kellett has not had a winner on the Flat since Upper Lambourn beat Pull The Pin at Southwell in March 2013.

Pull The Pin (tongue tie and blinkers), once trained by Stokell for Stephen Arnold, is running for Mandy Rowland. Rowland also runs another former Arnold-owned horse in Ciaras Cookie (hood), who won for him last year when trained by Heather Dalton.

Arnold’s horses, mainly active from 2011 to 2015, tended to be sent on a tour of trainers’ yards, beginning with Paddy Butler then moving on to Richard Guest, Violet Jordan, Ann Stokell and Dalton. That was true of his most prolific winner, Daniel Thomas, who won nine times for Arnold between 2012-2014.

His familiar red and white quartered colours look set to be seen again on the recently established Daniel Thomas partnership.

Then there is Finley Marsh, twice second from just seven rides, and Jacob Mitchell, having his fifth ride, both hoping for their first winner. Interesting.