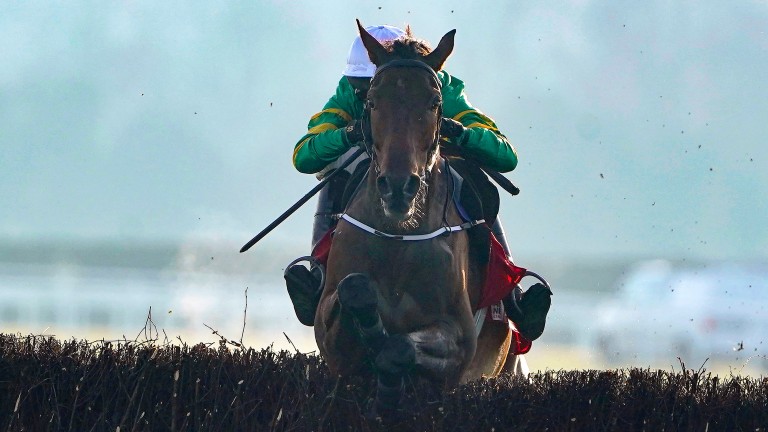 Fakir D'Oudairies is left clear in the Drinmore Novice Chase after Samcro's fall at the second-last fence
Alan Crowhurst
1 of 1
By David Jennings UPDATED 5:38PM, DEC 1 2019

Samcro wouldn't be Samcro if he didn't leave us with more questions than answers.

Just as we were about to finally find out whether he was all talk or not, the most hyped horse in training departed the scene at the most inappropriate moment leaving Fakir D'Oudairies to win his first Grade 1 by a wide margin.

Let's deal with the winner first. Fakir D'Oudairies is the most magnificent jumper of a fence - slick, accurate and lightning quick through the air. He bowled along merrily at the head of affairs and was still just about in front when Samcro slithered on landing at the second-last.

He was left a long way clear and beat the 145-rated hurdler Ronald Pump by 22 lengths. Burrows Saint, the Irish Grand National winner, was a further four and three-quarter lengths back in third. The winner is already a better chaser than hurdler and is priced between 9-2 and 6-1 for the Racing Post Arkle.

"It’s a pity Samcro didn’t stand up because it was looking like it was going to be a great race," said winning trainer Joseph O'Brien. He was speaking for us all.

O'Brien added: "I'm delighted with our horse. He has a fantastic attitude for racing and every day he’s enthusiastic about his work and schooling. He’s a proper racehorse and we are very lucky to have him.

"Mark gave him a lovely ride. He took it up down the back and he jumped from fence to fence. He really attacked his fences. He has plenty of options and we could go over two miles at Leopardstown or two and a half at Limerick. He probably will stay further in time."

Now onto Samcro. After the decision to delay his chasing career by a year backfired, he looked back to himself when winning a beginners chase by 17 lengths at Down Royal last month. This was D-day. Or so we thought.

He was not as slick as Fakir D'Oudairies through the air, but he was safe and did not make any noteworthy errors. He traded at a low of 1.28 on the exchanges in-running and the consensus among the crowd was that he would have won had he stayed on his feet.

"He just thought he slipped on landing after the fence. It is just one of those things, but I thought he was travelling very well at the time and Jack did too."

Despite his untimely departure, Samcro was shortened into 4-1 favourite from 6-1 by Boylesports for the JLT Novices' Chase.
Ronald Pump inherited the runner-up spot after making a mess of the tenth fence.

"He is not a big horse and Robbie [Power] thought he found the fences very big. We will see how he is and will probably step him up to three miles at Leopardstown over Christmas," said Matthew Smith of Ronald Pump.

Willie Mullins was underwhelmed with both his runners, most notably Burrows Saint.

"I was disappointed with both of mine. I know it was a mile shorter than the Irish Grand National but I thought he would have run better than that," said the champion trainer.

FIRST PUBLISHED 1:41PM, DEC 1 2019
It’s a pity Samcro didn’t stand up because it was looking like it was going to be a great race