Fairytale start for McNeilly as Benatar steals the limelight 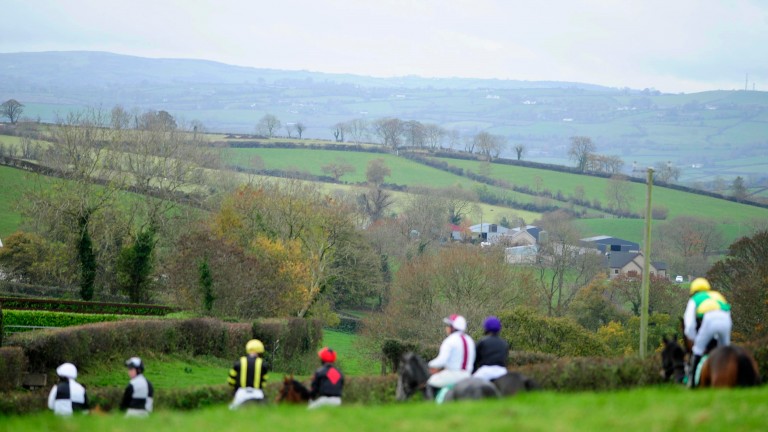 It was the busiest weekend of the season so far, with four meetings, kicking off in the North at Loughbrickland on Saturday.

Karen is a sister-in-law of Warren Ewing, a former leading amateur and now a respected point-to-point handler in his own right.

She has found a promising sort in this Beneficial gelding, who won by 15 lengths and six lengths from horses trained respectively by Shark Hanlon and Denis Murphy – two men whose runners have been in great form in recent weeks.

Mark O’Hare sent Benatar on at the third-last and he went right away, showing the sort of stamina you would typically associate with the family of the dam, Carrigeen Lily.

The Carrigeen horses, mostly bred by Dick and Ann Lalor, parents of top lady rider Liz Lalor, trace back to Carrigeensharragh who was a good handicap chaser more than 30 years ago.

The Lalors bred Chicago Grey, the horse who gave me a National Hunt Chase victory at Cheltenham, out of a mare called Carrigeen Acer. She is also the dam of Carrigeen Acebo, a top-class mare in points, champion mare in 2015 and joint-champion last season with Maple Mons.

Benatar is a brother to Carrigeen Lechuga who shared the mares’ championship in 2011.

It was a great day for Mark O’Hare who completed a treble by riding two winners for Jerry Cosgrave. He took the mares’ maiden on Maralin faller Ballela Magic and was on the long odds-on Incitatum in the older geldings’ maiden.

All in all, it was a successful day for northern stables, with winners for the McParlan family and for Colin McBratney, who scored with The Jazz Singer at Navan on Sunday.

The Jazz Singer didn’t have much luck when he ran in points but has now won twice over hurdles at Navan, showing a liking for a test of stamina.

The only winner from south of the border was the Jim Dreaper-trained Grand Jesture who beat Clondaw Frisby (Cosgrave) and Quiet Account (McBratney) to win the open with plenty to spare.

Only an eight-year-old, this fellow had good form in staying handicaps when trained by Henry de Bromhead.
He ran a blinder to finish second to The Druids Nephew in one of the

Cheltenham Festival handicaps two seasons ago.
Unfortunately he dug his heels in at the start on his two runs after that, including in the Paddy Power at Leopardstown last Christmas. He was on best behaviour here and it will be interesting to see what route they decide to take now.

I enjoyed the day as a spectator at the Westmeath & Longford meeting at Corbeagh House. The day started with a good winner in the four-year-old maiden, Just Don’t Ask, trained near Trim by Virginia Considine, whose husband Dermot is a well-known figure in the half-bred industry.

The Ask gelding, who fell at Inch on his only start last season, made a good impression, beating another son of Ask, the Colin McKeever-trained Kingsplace.

Only three turned out for the mares’ open, but you couldn’t complain because the trio concerned are probably the best mares around at the moment.

The other runner, Abigail Lynch, who won a point at Kinsale for Sam Curling early in her career, won three times under rules in Britain and is now back with Sam.

She won the mares’ open at Rathcannon last month after Maple Mons went at the first fence.

Maple Mons was then pulled up when taking on the geldings in the Maralin race won easily by the high-class Raz Du Mee, but she was back in her comfort zone here, making all under Declan Lavery to win easily from Abigail Lynch.

Carrigeen Acebo never got into it on her first start of the campaign, but the run should have played its part in getting her back to full fitness.

There was plenty of interest at Dromahane on Sunday, kicking off with a mares’ maiden which was divided.

The first division produced a dead-heat between Regal D’Argent, trained by Colin Bowe and ridden by Rob James, and Maria’s Benefit, representing Bowe’s County Wexford neighbour James Doyle, and partnered by Richie Harding, back from a successful trip to Cheltenham where he rode What A Moment to win the amateur riders’ handicap chase last Friday.

It’s always good to see trainers from across the water looking in this direction for top amateur riders, and Jamie Codd was in action in the same race, riding third-placed Fayette County for Tim Vaughan.
In visual terms the most impressive winner at Dromahane was Legal Ok on his first run for Harry Kelly, having had one outing last season.
The Echo Of Light gelding was sent straight into the lead by Pa King and was a distance in front at an early stage.
There’s no doubt he was able to build up a very soft lead, but the fact he was a fence in front of his rivals by the last was unusual to say the least. He could be very good, but only time will tell exactly how to assess such a performance.

Like all fans of jump racing I was saddened to hear the news that Simonsig had suffered a fatal injury at Cheltenham.

I was lucky enough to ride this wonderful horse early in his career, winning by 20 lengths at Limavady in the spring of 2011.

Just a couple of weeks later Ian Ferguson saddled him to win the Racing Post Champion point-to-point bumper at Fairyhouse.

This is a massive blow for everyone connected with the horse, and especially for owner Ronnie Bartlett, a great supporter of Irish point-to-pointing.

It’s always tough to lose a horse, but to lose one as good is really devastating.