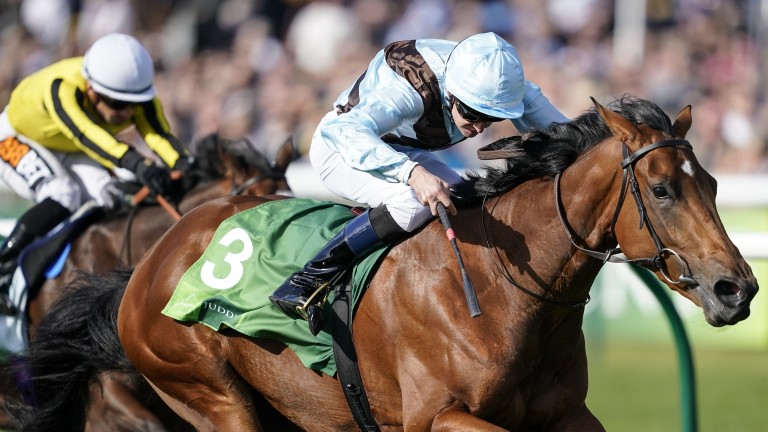 Fairyland shows plenty of guts to grind out victory in the Cheveley Park Stakes
Alan Crowhurst
1 of 1
By Lewis Porteous UPDATED 7:17PM, SEP 29 2018

This time last year Aidan O’Brien was closing in on Bobby Frankel’s world record for top-flight winners in a year. Any hope of a repeat of that record-breaking season this term went under when a respiratory illness swept through Ballydoyle, taming his big-race winning spree through the height of summer.

Yet those dark days were put firmly in the shade on a sun-kissed autumn afternoon on the Rowley Mile as O’Brien annexed the three Group races on the card.

Fairyland, among the hardest hit by the bug O’Brien called the worst he has encountered during his unrivalled career, had bounced back to win the Lowther at York in August on her first run in two months and she again showed a gut-full of tenacity to provide her trainer with a third consecutive win in the Group 1 Juddmonte Cheveley Park Stakes.

While the Prix Morny, in which Pretty Pollyanna edged out Signora Cabello, had been the form line expected to hold the key to this Group 1, the Lowther provided the answers, with The Mackem Bullet chasing the winner home just as she had on the Knavesmire five weeks ago.

“We thought she would come forward from York and she did,” said O’Brien. “They were all very sick but absolutely she was [hit hard]. She’s a lovely, big filly and has loads of speed. Donnacha gave her a peach of a ride.”

Son Donnacha in the saddle was also keen to point to Fairyland’s “natural speed”, so perhaps a general quote of 14-1 for the Qipco 1,000 Guineas may not prove overgenerous, although her trainer was not ruling out her stamina stretching to a mile next season.

He added: “We always thought she would maybe get a mile but she’s not short of speed and has a lovely mind. We probably wouldn’t run her again this season.

"They went through a tough summer but I’m delighted to have them back [from illness].”

For good measure O’Brien saddled So Perfect in third, one place ahead of 6-4 favourite Pretty Pollyanna, who jumped from the gates alertly before slotting in mid-division under champion jockey Silvestre de Sousa.

Michael Bell, trainer of Pretty Pollyanna, said: “It’s obviously disappointing. We had a very good position in the first half-furlong and then he tucked her in, which in hindsight was the wrong thing to do.

"She does have an entry in the Fillies’ Mile and we’ll talk to Bill and Tim Gredley and see whether we take that up. She hasn’t blown a candle out after the race, so it’s a possibility.”

First Group 1 for Alan King as Trueshan outstays Goodwood Cup rivals 'She's very much the matriarch' - You'resothrilling a true blue hen for Coolmore 'The more rain the better for Trueshan' - trainer quotes on the Group 1 Kings and queens of Ascot can illuminate the galleries on racing's day to shine Can Aidan O'Brien land his eighth Tyros Stakes in a row with Point Lonsdale? Aidan O'Brien hails 'incredible' St Mark's Basilica as focus turns to York