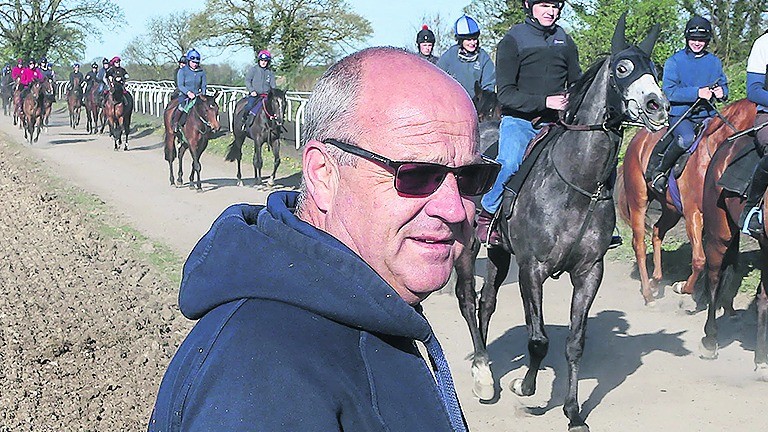 It must surely take planning of almost military-like precision, but Richard Fahey seems totally unfazed that he will equal a personal record on Saturday if his 32 – yes, 32! – declared runners all take part in their respective races spread over five meetings.

They include participants in the day's feature races – Growl in the Betway John Of Gaunt Stakes at Haydock, and Areen Faisal and Maggies Angel in Beverley's two-year-old highlights.

The master of Musley Bank, Malton, whose operation has got stronger and stronger over the last two decades and now includes dual Group 1 winner Ribchester for Godolphin, has always had a reputation as one of Britain’s busiest handlers.

Where they're all running

Fahey has sent out 30 or more runners in a single day half a dozen times in his career, including 32 on two occasions – June 11 and July 23 – last year.

He is clearly at his busiest at the height of summer, when the meetings come thick and fast, and on this corresponding day last year he also had 32 runners, although the make-up of the fixtures was different.

It is clearly a recipe for success as Fahey recorded 198 winners in 2016, accumulated more than £3 million in prize-money and achieved success in Group 1, 2 and 3 company.

The previous year Fahey equalled the record of 235 winners in a calendar year, a total which is testament not only to his own talent but the hard graft and teamwork that goes on behind the scenes.

“Thirty-two is the most we’ve ever sent out on a single day,” Fahey said on Friday.

“We’re well sorted for tomorrow. It’s no big deal and there are no problems.”

While 'no big deal' for Fahey, a huge number of trainers, of course, would love 32 horses in their yard.

He continued: “There are meetings at Beverley, Catterick, Chester and Haydock, places where we'd always expect to have plenty of runners.

“We’re in action down at Newmarket too, but don’t have any runners at Chepstow. That’s not to say we didn’t consider it. We had two in there but decided not to run them.

“We’re happy with the way things are going. We’re busy and are sending out plenty of winners, but this is racing and in our industry you always want more.”

The biggest Fahey representation is at his happy hunting ground of Chester, where 11 of his horses are due to line-up, including three in the 6f Whitley Neill Gin Handicap, namely Powerallied, Khelman and Ballesteros.

Eight travel to Beverley, including the aforementioned Areen Faisal, the mount of Paul Hanagan in the Brian Yeardley Continental Two Year Old Trophy, five head off to Haydock, while four of his team will be in action at Catterick and Newmarket. The yard is due to be using a total of 15 jockeys during the day.

Fahey is indebted to all the staff who have helped to make sending out such a staggering number of runners on a single day possible.

“Everyone will be working hard on Saturday,” he said. “We’re using four of our boxes and those of C & C Transport and Alan Hill for the overflow.

“It really isn’t a problem, though. We’re out there to train winners and that’s what we’re trying to do.

“It may seem a massive operation but it’s more straightforward than you might think. Let’s just hope we have a winner or two among them.”

Fahey is 5-4 with Sky Bet to train more than three winners on Saturday, while he is 11-8 land two or fewer.

Fahey on his three best chances

Champion Harbour 5.35 Beverley
He's well handicapped if he can get his act together. He won a mile handicap on the all-weather at Newcastle last month and that should have done his confidence the world of good. I’m very happy with him and Paul Hanagan is in the saddle. aWe also run Greenview Paradise, the mount of Joe Doyle, but she’ll do well to beat Champion Harbour.

Growl 4.05 Haydock
Didn’t run up to form on his first appearance of the season in the Group 2 Duke of York, where he was a little fresh. Stepping up to seven furlongs [from six] on slower ground should see him run better. He’s officially the highest-rated horse in the race and goes there in good form. Graham Lee rides.

Angel Gabrial 3.40 Newmarket
Has come down the ratings and Andrew Mullen rides. I’m hoping he can get back to winning ways and, all being well, he’ll be there or thereabouts. We're also represented by Gabrial’s King, but he's the sort who can run well or terrible.