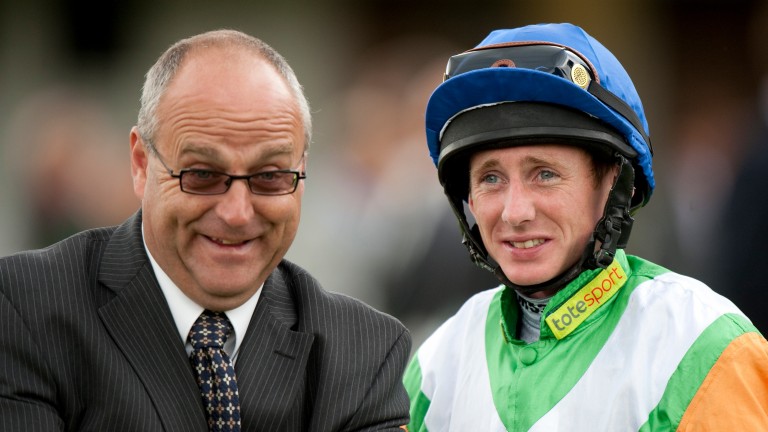 Richard Fahey gave the clearest sign yet that he could renew his incredibly effective partnership with Paul Hanagan next season.

After watching Growl barely break out of a canter at Sha Tin on Friday morning, Fahey suggested both his mind and door were open to reuniting with his former stable jockey – with the ball now firmly in Hanagan's court.

Hanagan recently lost his retainer with Hamdan Al Maktoum to champion jockey Jim Crowley and has taken a holiday to consider his options, with a fresh bid for the jockeys' championship mooted.

In that sense a move back up north to the tracks he rides so well must be made all the more tempting by the increase in the number and quality of horses at Fahey's disposal.

Fahey was still Hanagan's single biggest supplier of rides (89) and winners (ten) in a disappointing year in which he has ridden just 73 winners so far. When he won the title back with Fahey's support in 2010 and 2011 he managed 205 and 177 winners respectively.

Fahey said: "It's up to Paul to let people know what he's doing, but at the moment I get the feeling he wants to come back up north and we've never stopped using him, so we'll see. It hasn't been strongly discussed as he's on holiday at the moment, but it's one option."

Fahey also mapped out plans for Prix Jacques le Marois winner Ribchester, who could step up in trip on his first start as a four-year-old and contest the 1m1f Dubai Turf.

"He came back into training this week and has been on the treadmill," added Fahey. "I'm quite keen to take him to Dubai for World Cup night.

"I'd just take him straight in there, that's where we'll look to start his season off. On pedigree he should stay the nine furlongs of the Dubai Turf and if he does it will open up some of the mile-and-a-quarter races in the second part of the season. But he also has an awful lot of speed, so he could go back sprinting.

"So he'll go to Dubai and then there's the Lockinge and the Queen Anne and we'll see how he gets on, but we haven't drawn a line through races like the Eclipse – they're definitely on my mind."

Another trainer with Royal Ascot already in mind for his horse is the colourful Gary Moore (not to be confused with his British namesake). You can read more about Moore and his Sprint hope Takedown here, but suffice to say he's dreaming very big.

The former jockey said: "Having ridden at the meeting I think it'd be just fantastic to go back there with a horse who's hopefully come out and won on Sunday."

Oh yeah, did I mention he's incredibly bullish about the chances of his whopper of a four-year-old? Well, he really fancies his chances in a very infectious manner.

If Takedown does come to Royal Ascot he'd be worth popping along to see because he's an absolute beast of a horse. He weighs in at 618kg and is just short of 17 hands. Putting that into perspective, Australia's other runner in the Sprint, Gary Portelli's Rebel Dane, is 489kg.

The king of Hong Kong expects to reign in Mile

"Joao's a great jockey. He gets the best opportunities over here and he calls the shots, like Ryan Moore does in England," said De Sousa. "He's a top rider but everywhere you go there's a top rider. He's the king around here but he can't win them all so we keep chasing the dream."

So who does the king of Hong Kong rate as his best chance on Sunday? That's simple, Able Friend.

"He's very special. He's given me some of my biggest wins. The first time I sat on him I said to John [Moore, trainer] he's going to be a champion. He's my favourite horse, he has a place deep in my heart. His preparation hasn't been the best but we've done all we can and he feels good, so if he's not 100 per cent I think he will be very close to it."