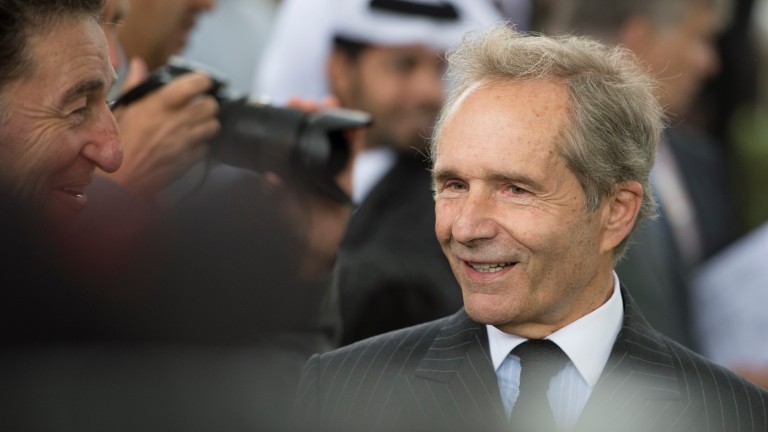 Andre Fabre is one of many trainers whose string have suffered health problems in 2016, but Waldgeist ensured a fine finale when coming from well off the pace under Pierre-Charles Boudot to foil a four-strong challenge from Aidan O'Brien.

Waldgeist was one of only two French-trained horses in the line-up but was well supported locally by those convinced he would prove better than his third place in the Group 3 Prix de Conde last time out.

"Chantilly isn’t his track and he jumped the Passage de Route [road crossing], so I always felt he could beat those horses," said Fabre.

"He will be a mile-and-a-half horse next year and I’ve put him in the Irish Derby, which is a race that could really suit him. He could go to Epsom beforehand, but I think the Curragh will be his track."

Quotes for the Investec-sponsored Epsom Classic range from 16-1 to 25-1.

For Boudot, the win marked a welcome change of fortune, having been unseated from Capchop leaving the stalls in the first Group 1 of the day, the Criterium International.

The champion jockey-elect also felt the Conde - in which he had finished behind the reopposing Frankuus and Prinz Hlodowig - had been less of a disappointment than to some observers.

"He's still quite tender and has plenty to learn, so we wanted to give him a good lesson last time," said Boudot.

"He still lacks a little strength but has a lot of quality and will make a good three-year-old. It's great to win the race for my boss, and he's certainly a horse to watch out for next year."

Godolphin's Best Solution sat just behind the early pace and stayed on well enough under Christophe Soumillon to be beaten a length in second, although in truth he was outstayed by the winner, who himself may have benefited from the testing early fractions.

Capri, who headed O'Brien's quartet, was rerouted here having been ante-post favourite for the Racing Post Trophy and, while he was predictably pushed out by some bookmakers to 20-1 (from 14) for the Derby after being beaten a length and a half into third, Aidan O'Brien feels his Beresford Stakes winner still has a big future.

"I think he ran very well," said O'Brien. "He's still a baby and is a horse to look forward to next year.

"He'll be all right on better ground. He's a big horse and I think he'll improve a lot over the winter."

A neck back in fourth was stablemate Douglas Macarthur, and O'Brien added: "He kept going and can get a mile and a half very well next year, so I'm very happy with his run."

Ballydoyle's other runners, Taj Mahal and Wings Of Eagles, were fifth and ninth, although Coolmore kingpins John Magnier and Michael Tabor each hold a 25 per cent stake in Waldgeist with Gestut Ammerland and Newsells Park Stud.

Best Solution was much the best of the British-trained runners as Cunco was seventh, Frankuus eighth, D'Bai 11th and Rich Legacy 12th.

Classic-winning trainer David Wachman did not receive the send-off his 20-year career deserved as his final runner, Rekindling, finished last of the 13 runners.

FIRST PUBLISHED 6:10PM, OCT 30 2016
He could go to Epsom beforehand but I think the Curragh will be his track