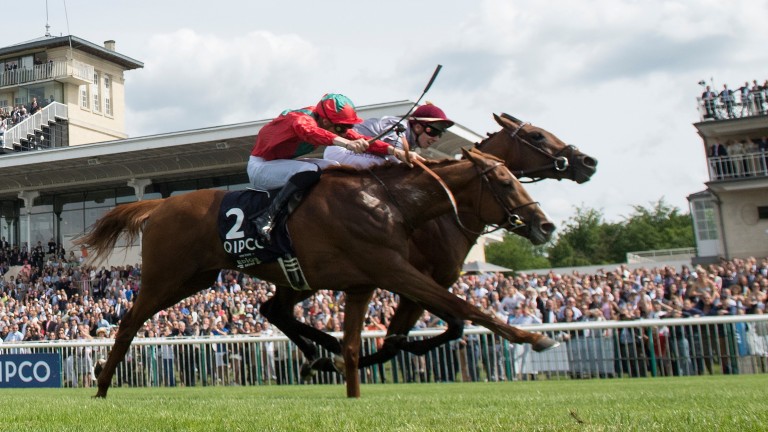 Waldgeist (red), just denied by Brametot in the Prix du Jockey Club, is a most welcome runner in the Irish Derby
Edward Whitaker
1 of 1
By Peter Scargill and Tony O'Hehir 8:04PM, JUN 25 2017

Master trainer Andre Fabre is preparing to pitch Waldgeist into battle with the Ballydoyle boys in a Dubai Duty Free Irish Derby he thinks could solve a middle-distance muddle.

Fabre stated on Sunday that European racing was still waiting for a three-year-old colt to emerge as king of the Classic pack, and he is hopeful his Prix du Jockey Club runner-up can serve it up to Derby hero Wings Of Eagles and Epsom third Cracksman at the Curragh this Saturday.

Aidan O’Brien’s team for the Curragh could consist of five of his six Derby runners from Epsom, he revealed on Sunday, headed by shock 40-1 winner Wings Of Eagles.

As it was interpreted before Epsom, the size of O’Brien’s team could indicate that the trainer, and Coolmore partners, remain unconvinced about the hierarchy of their three-year-old middle-distance colts, and such a view is backed up by Fabre, who feels a standout performer is yet to break away from the crowd – but could do so this weekend.

He said: “The form of all the different middle-distance horses in Europe is difficult to read this year. We're still awaiting the standout horse, and at the moment I have no idea which one that will be. Maybe we'll know more after the Irish Derby.”

Fabre has twice won the Classic, most recently with Hurricane Run in 2005 for owner-breeder Dietrich von Boetticher’s Gestut Ammerland, and Waldgeist represents the same connections.

Waldgeist, a 4-1 shot, sits third in the market behind 5-2 joint-favourites Cracksman and Wings Of Eagles after being collared in the final strides of the Prix du Jockey Club last time by Brametot over a furlong and a half shorter.

Fabre said: “If all goes well in Waldgeist's work tomorrow then he'll go there.

Fabre added: “Hurricane Run and him are different types. Hurricane Run was a strong horse with a galloping style and this one has more acceleration.” 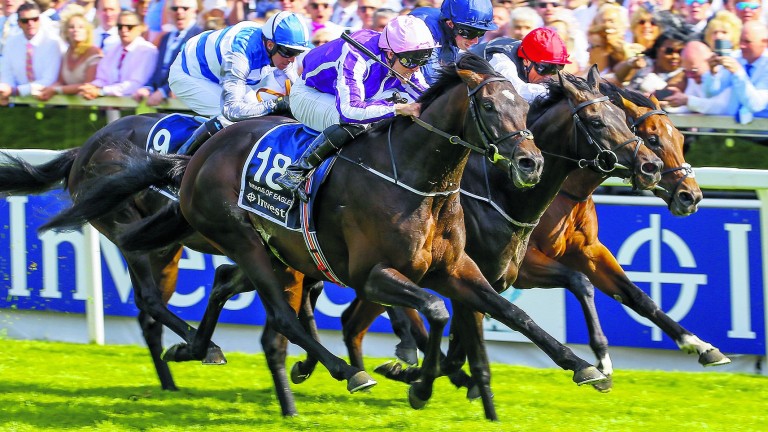 Standing in his way is an O’Brien team set to look remarkably similar to Epsom, with only the Coral-Eclipse-bound Cliffs Of Moher heading elsewhere.

Cliffs Of Moher was ridden in the Derby by Ryan Moore, who will be on Wings Of Eagles at the Curragh, Padraig Beggy having partnered him to victory at Epsom. It is not yet known if Beggy is in line for a ride in the Irish Derby.

O’Brien, who has already won his nation's premier Flat race 11 times, said: "Cliffs Of Moher won't be running on Saturday as we're keeping him for the Coral-Eclipse at Sandown the following weekend, but we will probably have four or five runners in the Irish Derby.

"The plan is to run Wings Of Eagles. He came out of his Epsom win well and everything seems to be fine with him.

"Capri, Douglas Macarthur and The Anvil are intended runners but we'll wait until later in the week to see if Venice Beach will run."

While O'Brien was top trainer at Royal Ascot with six winners, Fabre was also able to reflect on a successful meeting. With his only two runners he won the Jersey Stakes with 2-1 favourite Le Brivido and then came close to landing back-to-back runnings of the Duke of Cambridge with Usherette, who was a fast-finishing third behind compatriot Qemah.

Fabre said: “I was very confident beforehand with Le Brivido and he justified this confidence as he won very well.

"Being second in the French Guineas was very good form and I was confident because he’s a very good horse – and given his price a lot of people shared my confidence. He'll go for the Prix Jacques le Marios next, for sure.

“Usherette was a bit unlucky but the winner won nicely so you could not be sure she'd have won, but maybe second. I was pleased with the run and it showed she's still a good mare.

"She will go to Deauville [for the Prix Rothschild] as she didn’t enjoy the July course last year so she won't go to Newmarket. Hopefully she can go to Deauville and beat the winner from Ascot.”

FIRST PUBLISHED 8:04PM, JUN 25 2017
It’s a nice, galloping course and it’s my intuition that it should be right for him at the Curragh