Eyes wide open: who will leap from Saturday horse to festival contender? 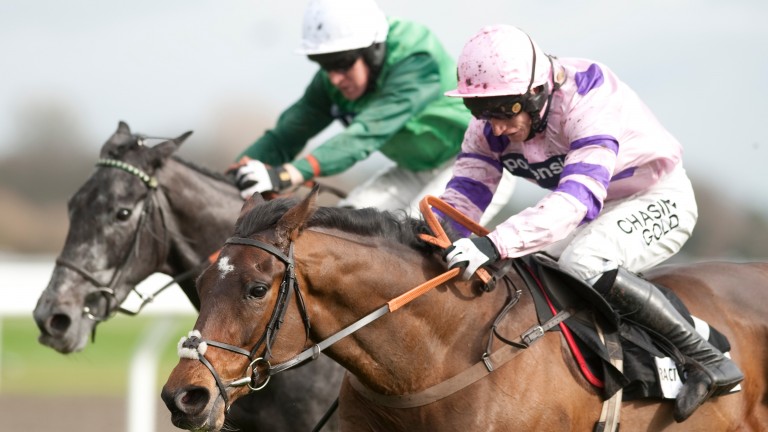 Zarkandar burst onto the scene in the 2011 Adonis Hurdle for trainer Paul Nicholls before going on to Cheltenham Festival glory the following month. Will it be more of the same with Solo on Saturday?
Edward Whitaker
1 of 1
By Scott Burton UPDATED 7:59AM, FEB 22 2020

With just 17 days until the the start of racing's ultimate week of question and answer, those who have been trying to solve the various Cheltenham puzzles may feel they now have all the evidence they need to draw conclusions.

But history tells us that even at this late stage new candidates can emerge for championship honours. And vital information previously hidden from view can be uncovered.

The trainers know that better than anyone and, despite not remotely resembling Cheltenham in layout, pancake flat and right-handed Kempton has long been the final staging post on the road to the festival.

If there is a poster boy for the kind of horse that can burst into contention for one of the major Cheltenham prizes among Saturday's budding stars, then it is the Paul Nicholls-trained Solo, who puts his JCB Triumph Hurdle claims on the line when making his UK debut in the Weatherbys Cheltenham Festival Betting Guide Adonis Hurdle (1.50)

Solo lived up to his name when winning in the manner of a time triallist by 15 lengths on his second start at Auteuil for Guillaume Macaire and bids to "do a Zarkandar" for Nicholls and parachute himself straight into the Triumph reckoning.

It seems inconceivable but, just three years after his sister Zarkava had won the Arc, Zarkandar was allowed to go off at 8-1 for his first start in Britain.

His example as well as that of another French import the year before, Soldatino, have helped establish an almost iron rule among some ante-post punters that the picture for the Triumph (and its little brother the Boodles Handicap) is lacking crucial input until this race has been run.

The stats suggest that the Adonis is by far the most likely of the three graded novice contests on the card to throw up a Cheltenham candidate: since 2000, 55 horses who ran in the race went on to the festival, with five winning and another four hitting the frame.

Solo is far from the only runner with an exotic back story who is waiting to vault into the limelight, given the presence of the Emmet Mullins-trained Fujimoto Flyer.

Although she would not the first Japanese-bred challenger to head to the Triumph - Made In Japan shouted his heritage from the rooftops before winning for Richard Johnson and Philip Hobbs in 2004 - she remains something of a rarity, even before you allow for an unconventional hurdling career consisting of wins at Killarney and Auteuil. 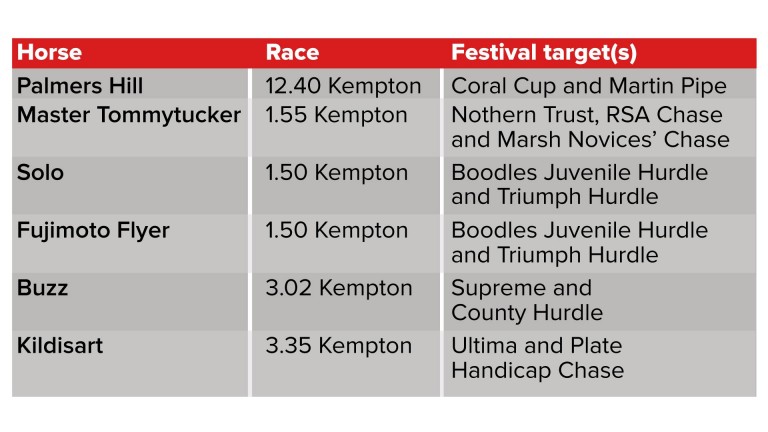 Throw in Blame It On Sally, a jumping debutant from the Alan King yard who earned a BHA rating of 76 on the Flat for Sir Mark Prescott, and you have all the ingredients of a genuine Cheltenham trial, even at this late stage

And make no mistake, it is late in the day, as illustrated by Colin Tizzard's decision to skip the Betway Pendil Novices' Chase (1.15) with Reserve Tank.

The absence of those two names has barely diminished the offering though, with both the Pendil and the Sky Bet Dovecote Novices' Hurdle (3.02) showcasing potential stars who could soon be taking high rank in the festival markets.

In this context Henderson's candidate for the Dovecote could hardly carry a more appropriate name.

Buzz is exactly what the son of Motivator - who was Listed placed on the Flat - will cause if he can post a good performance here and stretch his unbeaten record over hurdles to three.

He is currently a 25-1 chance for the same sponsors' Supreme Novices' Hurdle at the festival, while it should not be overlooked that he also holds an entry in the County Hurdle.

Time is ticking and the temptation, for trainers and their box-walking owners alike, must be to unwrap another ball of cotton wool and stay at home.

But even with the prospects of the word "good" in the Kempton going description fast receding, the chance to tune up for the big week on a half-decent surface is too valuable to pass up.

So keep your eyes open.

Tho above words also need bearing in mind when it comes to Highway One O One and Highway One O Two, who both run at Kempton on Saturday. Be careful with your betting slips! 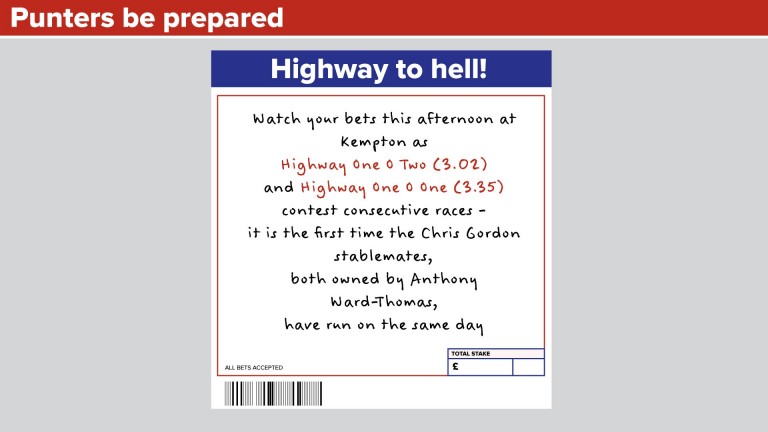 It is hardly breaking news that Paul Nicholls and Nicky Henderson are the dominant practitioners of their profession in Britain.

But with Cheltenham now not only in view but virtually filling the racing skyline, it is worth noting that both have exceptional records at this Kempton meeting. 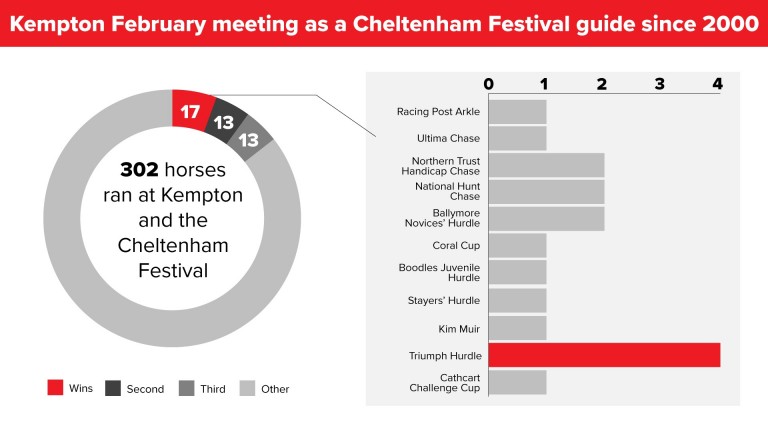 Nicholls has saddled 16 winners at this fixture since 2010 from 77 runners and is well represented across the card here.

In particular he has trained his sights on the Betway Handicap Chase (3.35), where he throws four darts at the £100,000 board.

It is arguably a sign of how Cheltenham continues to grow in stature that the artist formerly known as the Racing Post Chase is forced to jostle for top billing with the novice trials on the card.

But Nicholls has never been one to resist a good handicap pot and in Adrien Du Pont and Black Corton, he fields two of the likely market principals for a race which he has won twice before. 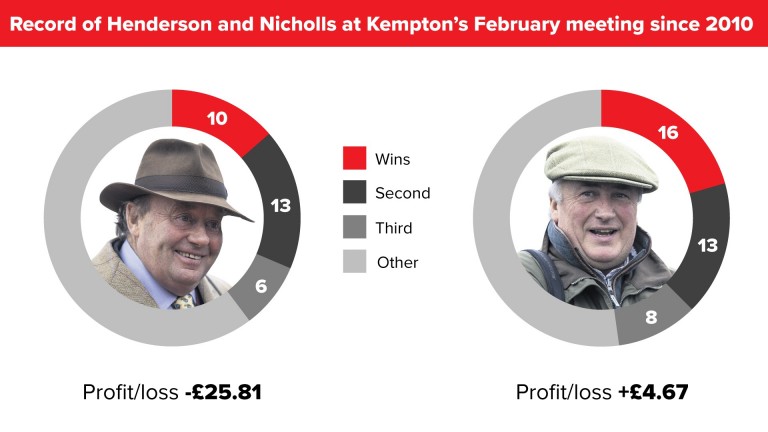 In the last decade, Henderson boasts ten winners from 63 runners (a 16 per cent strike-rate compared to Nicholls' 20 per cent), of whom six were successful in one of the three graded events for novices.

It is worth bearing in mind that the reach of those trials at the festival goes well beyond the championship novice races at Cheltenham, with runners from Kempton going on to feature in the finish of handicaps such as the Boodles Hurdle, the Northern Trust Novices' Chase and the Brown Advisory and Merriebelle Stable Plate.

With the weights now published for the Randox Health Grand National the wraps continue to be taken off various contenders, with the Grade 3 Bobbyjo Chase (4.02) at Fairyhouse often a race which can have an effect on the top end of the Aintree market. 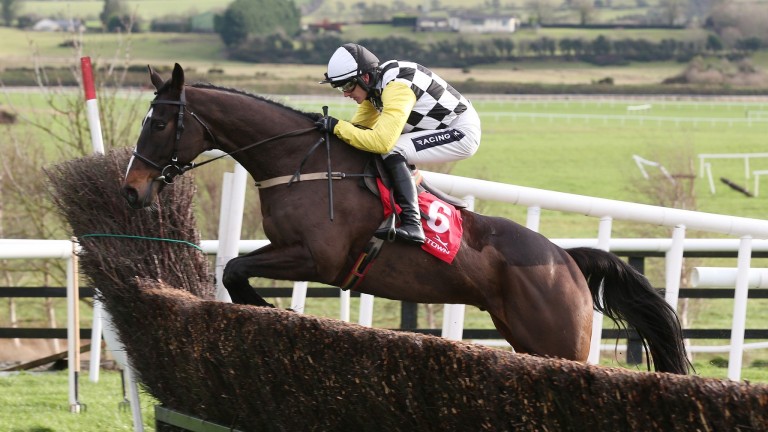 Of the six runners only Bellshill doesn't hold an entry for the National while Willie Mullins is responsible for four, including 2018 Grand National bridesmaid Pleasant Company, who may now be 12 but still has relatively few miles on the clock.

A year younger but off the track since Punchestown last May, Sub Lieutenant showed his liking for the Aintree fences when second in the Topham last year and a positive showing here might see bookmakers take the shears to his price.

Most of Britain's crack Flat jockeys are on a whirlwind tour of the globe at this time of the year but Frankie Dettori will be at Lingfield aboard Dubai Warrior for the Betway Winter Derby (3.15). 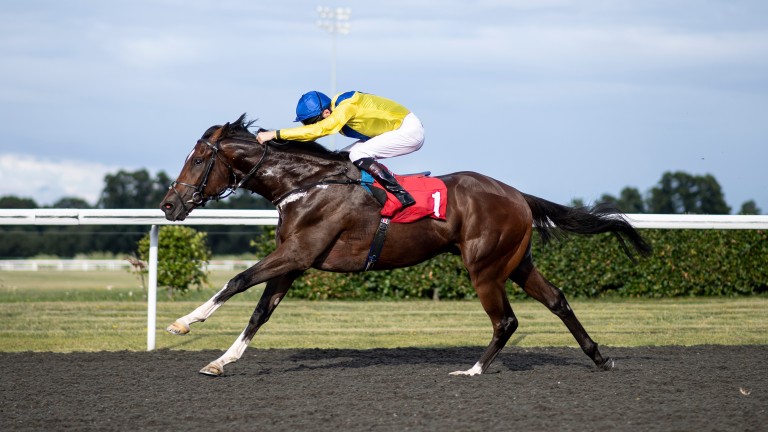 But such was the impression made in the trial for this race three weeks ago by Bangkok - who let's not forget started at single figures for the Epsom version last June - that Dubai Warrior may need to be every bit as good as John Gosden's opinion of him last autumn to make a race of it.

FIRST PUBLISHED 6:00PM, FEB 21 2020
History tells us that even at this late stage new candidates can emerge for championship honours