Eyes on the 2017 Arc: leading contenders for the French showpiece 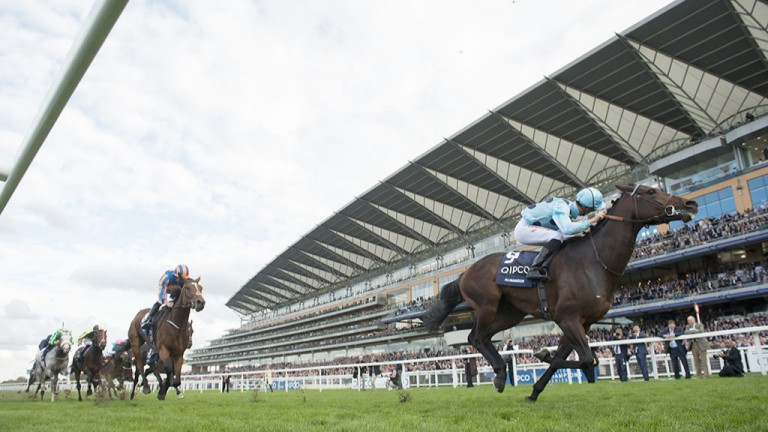 Almanzor: last year's champion three-year-old is favourite for this year's Arc
Edward Whitaker (racingpost.com/photos)
1 of 1
By Mark Storey 7:40PM, MAY 10 2017

It may have passed you by as you watched runners whizz round and round at Chester, but on Wednesday entries were revealed for what many consider the greatest Flat race of all, the Qatar Prix de l'Arc de Triomphe. There were 119 entries in total, with this little lot among the pick of the bunch . . .

Last year’s top three-year-old never made it to Chantilly last year but it could be a different story this time around. He announced his arrival in the Prix du Jockey Club, confirmed his class in the Irish Champion Stakes and rubber-stamped it in the British version. And he might well have won the Arc had he gone for it, having got the better of Arc winner Found at Leopardstown and Ascot. Clearly has the class but trainer Jean Claude Rouget’s barn has been affected by a serious virus.

She was beaten by Almanzor in the Irish Champion, but that was no disgrace for a filly so tough and consistent you just have to love her. Winner of the 1,000 Guineas and Oaks, the seven-time Group 1 scorer has never been out of the first three and got out of the blocks for the season with an easy win at Naas.

Injury meant last year was pretty much a write-off for the 2015 Irish Derby winner, but John Gosden has always maintained this son of Halling is a slow burner so don’t scoff at the notion of him becoming only the fifth five-year-old since the war to win the Arc. His easy defeat of Seventh Heaven in the Sheema Classic in March did his claims no harm.

The wait for a Japanese-trained winner goes on. But hope springs eternal and a strong challenge looks set to be mounted again, led by Satono Diamond, winner of the Grade 1 Kikuka Sho (St Leger) and Arima Kinen, and last year’s Japanese Horse of the Year and Japan Cup winner Kitasan Black, a year older at five.

We don’t know if he’s going to run in the Derby yet but the Arc may still end up within range. The last horse to land the 2,000 Guineas and Arc in the same season was Sea The Stars, so Churchill has plenty to live up to. But with a name like his and the uncomplicated way he won at Newmarket, he might just be up to it.

When Christophe Soumillon went to Kentucky he wasn’t banking on a rodeo-style ride. But that’s what he got as Thunder Snow bucked and kicked his way out of the stalls before being pulled up. No reason has emerged for his Kentucky Derby antics and Godolphin hope it can be filed as a one-off for a talented individual who already has a Group 1 win on his CV. Or maybe he’ll just burst out of the Chantilly stalls doing the can-can.

FIRST PUBLISHED 7:40PM, MAY 10 2017
The last horse to land the 2,000 Guineas and Arc in the same season was Sea The Stars, so Churchill has plenty to live up to