Extraordinary becomes the norm at centre of hope and dreams

James Burn spends a day at Oaksey House, a key centre for the Lambourn community 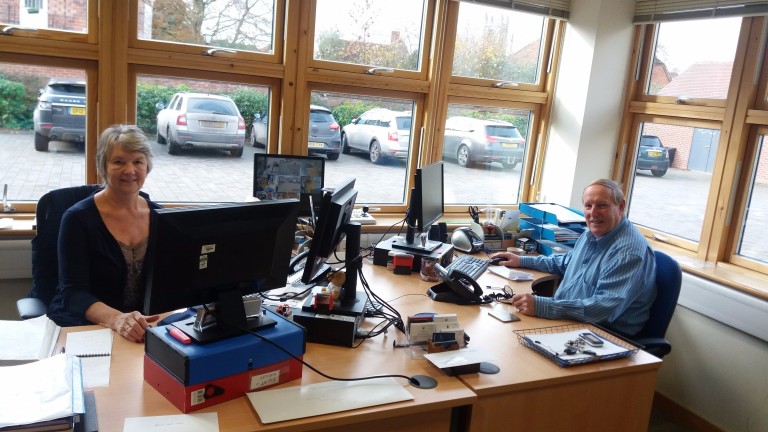 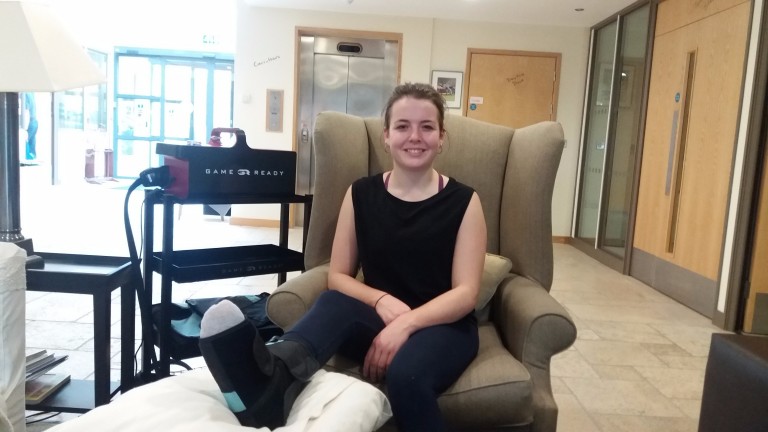 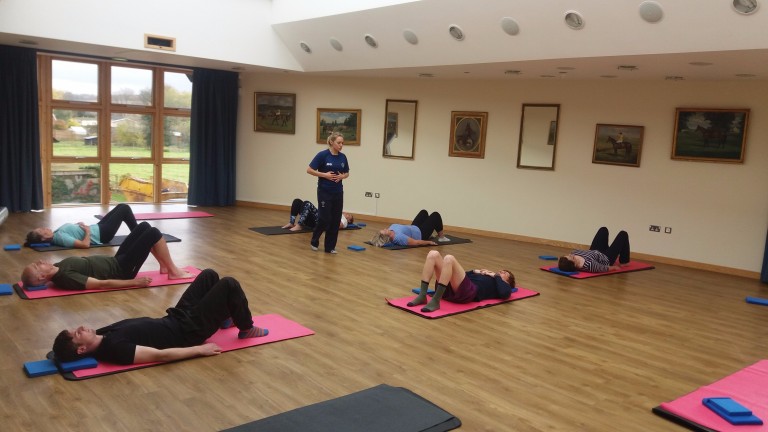 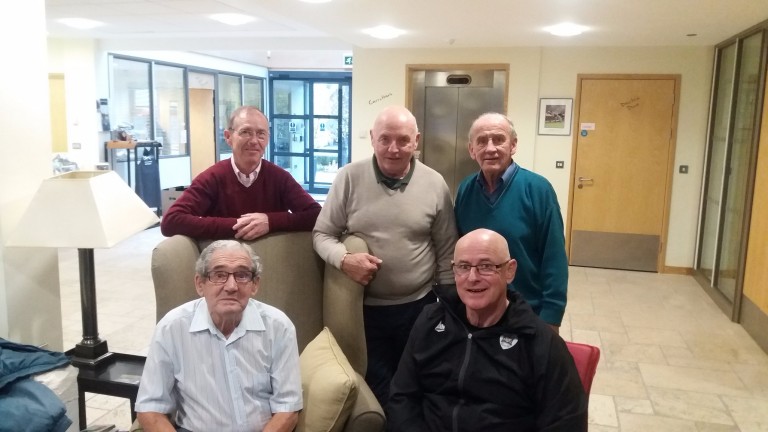 It is just before 9am and John and Jackie Porter, general managers of Oaksey House since its opening in 2009, are already at their desks plotting the day with physio Daloni Lucas.

"Who have we got in today?" Jackie ponders as she thumbs the diary. Plenty it soon turns out, even if today was meant to be a quiet day.

The doors to the gym fly open and out pops former amateur jockey and rewards4racing founder Josh Apiafi, who has a real physical specimen on his mind.

"Many Clouds schools for the first time this season tomorrow, you know," he says, mopping the sweat from his brow after a punishing workout.

He is replaced by Matt Bond, formerly with Charlie Mann but now a driver for Lambourn Racehorse Transport. "London Marathon next year," he says before disappearing into the gym - which is open to all, whether recuperating or not.

It seems hard to believe Oaksey House has been in existence less than a decade, so quickly has it become an integral part of village - and racing - life.

"I think we both saw the advert, but didn't say anything to each other," Jackie recalls when asked how they became involved. The couple have been heavily involved in Lambourn life for over 30 years.

"Noel Chance called and said he'd seen a job for us. We thought he was taking the mick, but applied and got it."

It hardly needs mentioning given how deeply it has affected the racing community, but Freddy Tylicki's recent paralysis following a Kempton fall has shone more spotlight on the Injured Jockeys Fund and the work the nine full-time staff and four part-timers at Oaksey House do.

Peter Toole, Isabel Tompsett and Brian Toomey have all convalesced here following serious injuries, and there is no thought of standing still. A £1 million refurbishment is on its way next year, which will include a hydrotherapy pool. But before an offshoot of Nasa finds itself into Lambourn after the refurb, John, a former point-to-point rider and trainer, is keen to stress the community vibe will remain significant when the building work is complete next year.

"I rode about 40 winners, but my claim to fame is finishing second to Oliver Sherwood in the Fox Hunters' at Aintree in 1980," he clarifies, before making his main point.

"We want that family atmosphere. In a way I don't want to become too clinical, but we have to. We want people to come here because they want to rather than need to. The TV's always on, they can read the Racing Post. There's free tea and coffee and the door's always open. We're very proud of what we've got here and want to show it off."

Amateur jockey Page Fuller, who broke her ankle in August, does not want to be here of course, but is quick to acknowledge the importance of the facility that has become her second home.

"No crutches," she beams on arrival just after 10am. "Oaksey has been great since I did it. Everyone has been so helpful and I've been never alone.

"In the first few weeks it's easy to get lost, especially for someone active like me, but coming here helps. You're not socialising as such, but bump into people and the physios are really tuned in, you really trust them."

If Fuller, who is based with Jamie Snowden in the village, has any Secret Santas out there, a Game Ready Ice Machine is probably top of her Christmas list.

"It's brilliant," adds the 21-year-old. "I used it the first day and the swelling went down by half. I've got it on the coldest setting." A McCoy-like threshold for pain then? "Well, I've got a sock on," she jokes before revealing she has twisted Lucas's arm to let her ride out in the morning.

Leading jump jockey Sam Twiston-Davies has also become familiar with the place since he suffered a spleen injury at Chepstow last month. While he warms up on the treadmill before a pilates class Derby winner John Reid, another regular, appears.

Reid is not, however, here for rehab. Dr Devious's rider is one of a handful of BHA jockey coaches based at Oaksey.

"You had to learn as you went along and there wasn't much help when I was young," he says after putting Mohd Shariq, who is with Sylvester Kirk, through his paces at noon.

"You had to get there under your own steam and sometimes that took a long time. I'd have benefited from a coach to stop me making some stupid mistakes – it took me about two years to work out the best way to ride."

Reid is quick to highlight others positives – "in my day after being injured you'd get fit riding, now they get you fit before you come back" – and eventer Alice Montgomery underlines the point in bold.

The New Zealander broke two collarbones, five ribs, punctured a lung, shattered her pelvis and also broke a femur following a fall near Daventry in July.

"I'm riding a horse now," she says, almost as if she doesn't believe it. "The doctor with me said to Mum, 'I know this is a long way off, but there's this place called Oaksey House she must go to when she comes out of hospital'.

"What's really good is no-one is amazed by your injuries and they're not amazed by your progress. If you say you want to be back in two weeks they might say it's a lofty goal, but they'll never say it's impossible and they'll try to make it happen.

"I was knocked out for ten minutes, but they're not shocked, they've seen it all before. They treat you like a normal human being rather than being an outpatient somewhere and looked at like a broken person. It's a helpful mindset.

"There is nowhere like this in New Zealand and what makes this place so special is every physio understands what riding a horse involves. There are plenty of good physios in New Zealand, but they wouldn't know one end of a horse from another."

Twiston-Davies is finished with his pilates class, which also included top Flat jockey Fran Berry, recovering from a foot injury, but keen to keep mobile.

"If I'd stayed at home I'd have run up the gallops, done some sit-ups and press-ups and then had a laugh with Willy," says Twiston-Davies. "Here, I'm doing stretches and using muscles I never realised I had. I used to laugh at AP and Noel Fehily doing stretches, but you see how supple Noel is. I'm feeling fitter than I was before – half-marathon fit."

Although Twiston-Davies shakes his head when asked if 13 miles are on his agenda, he is keen to stick with the advice Lucas and the other physios have provided.

"I'm logging everything I eat and drink. I had no experience or education of that before – I've got apps on my phone now."

Lucas, in her "ideal job", talks about educating jockeys early about how to deal with injuries, something the IJF's new head of rehabilitation Ed Stroud agrees with.

"The drive to get back in the saddle is like nothing I've witnessed," he says. "I've worked with rugby players and bobsledders, but jockeys literally just want to get back. It's an area that needs managing; accepting advice and setbacks."

Stroud is ex-army, but the community feel John Porter was keen not to lose soon becomes evident following the afternoon arrival of Jumbo Heaney, Jack Nelson and Tommy Jennings, all involved in the sport when Lambourn enjoyed its all-conquering golden era.

They join Reid and former rider Phil Wright, here for treatment following an injury as a trawlerman, for a brew and some reminiscing.

Hopefully out of earshot are two French apprentices from Jonathan Portman's yard who arrive at 6pm to "lose a bit of weight", while David Parkes and Ryan Tate turn up for their 6.45pm circuits with strength and conditioning coach Michael Peacock.

"It's an hour long and I've ridden at Kempton," Tate stresses in case any of his trainers are listening.

Tate and Parkes have seen first hand the benefits of Oaksey House after bad legs breaks last year, but are back in the saddle, as is event rider Montgomery, who had said earlier in the day: "Everyone here understands what it takes to get you back."

Some are not fortunate enough to make it, but whatever their circumstances, there will be all the support they need at a place where the extraordinary has become typical.