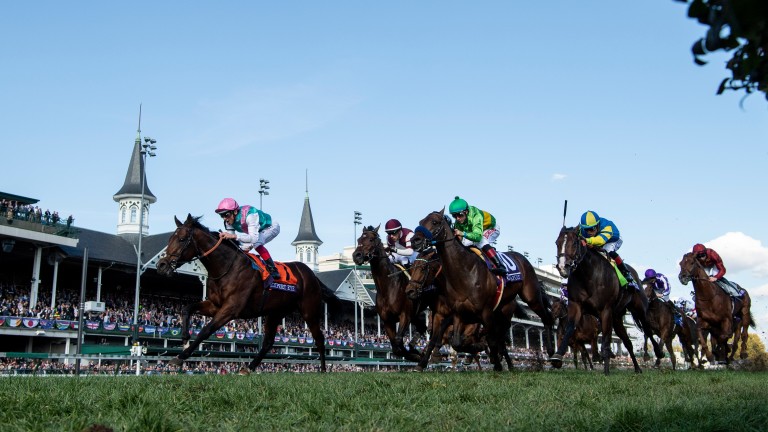 Trained by Sir Michael Stoute, Expert Eye announced himself as a juvenile of some potential when winning the Group 2 Vintage Stakes at Goodwood in scintillating style by four and a half lengths.

Although then disappointing in the Dewhurst, the son of Acclamation returned to his best this season when landing the Jersey Stakes at Royal Ascot, and was placed twice in Group 1 company before winning at the Breeders' Cup.

Teddy Grimthorpe, racing manager to Abdullah, paid tribute to Expert Eye on Friday: "I think Michael Stoute did a wonderful job with him. The Vintage Stakes was an incredibly impressive two-year-old performance with what he did and how he travelled in the race.

"This year he has been progressive. Every race he ran he found some improvement. The Jersey Stakes was gratifying mainly because it restored not only our faith but everybody's faith in the horse and established him as a potential high-class performer.

"He ran a very decent race at Goodwood in the Sussex Stakes and was a bit unlucky in the Moulin, he didn't quite get the break when he most needed it."

Despite conditions being less than ideal at the Breeders' Cup, Expert Eye still managed to claim a first Group 1 when coming with a late burst under Frankie Dettori to defeat Catapult by half a length.

"When I saw the weather change at Churchill Downs on the Thursday I thought, 'This is not going to be up his street'," Grimthorpe added. "So the way he coped with that showed his maturity, physically and mentally. The turn of foot he showed was the embodiment of what we all expected of him as he progressed."

Expert Eye will stand for a fee of £20,000, and Grimthorpe said of the future stallion: "He's a very interesting prospect and a gorgeous-looking horse."

Head to Racingpost.com/bloodstock for all the latest news on stallion fees, sales and much more

FIRST PUBLISHED 1:11PM, NOV 9 2018
The turn of foot he showed was the embodiment of what we all expected of him as he progressed