Expensive Emaraaty given chance to show he could be future champion 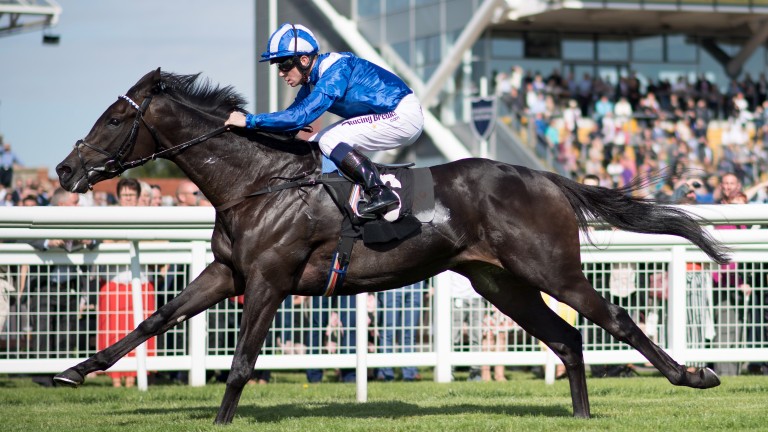 Emaraaty, a 2.6 million guineas buy who got off the mark in a novice event last month, will be fast-tracked straight to Group 1 company on Saturday when he contests the Darley Dewhurst Stakes.

The colt, a half-brother to dual Group 1 winner Izzi Top, will have his potential put to the test after he was one of 15 acceptors for the £500,000 showpiece of Newmarket's Future Champions meeting.

He is set to face Expert Eye, the Sir Michael Stoute-trained colt who won the Group 2 Vintage Stakes at Goodwood by four and a half lengths, in what could be the season's defining juvenile contest.

Emaraaty followed a debut third by winning at Newbury last month and Angus Gold, owner Hamdan Al Maktoum's racing manager, said: "It's a big step up from a maiden to a Group 1 and I'd be stupid to assure you he was going to beat horses like Expert Eye.

"But he’s a very quick colt with great potential and we're very hopeful he'll be a Group 1 horse at some point in his career."

'Main target for some time'

The main supporting race on the card, the £250,000 Betfred Cesarewitch, has drawn 53 acceptors in which Henry Ponsonby will field two leading candidates, both trained by Alan King, who lifted the prize two years ago.

Who Dares Wins shares second favouritism on 10-1 having landed the Cesarewitch Trial two weeks ago, while First Mohican, who is 33-1, bids to improve on last year's second place in the race.

Ponsonby, who fronts HP Racing, said: "Who Dares Wins is a wonderful horse and his victory in the Betfred Cesarewitch Trial proved he is still improving.

"He's been trained with this race as his main target for some time and will again be ridden by Tom Marquand.

"First Mohican has been there, done that and got the T-shirt. He'll be running in this race for the third straight year and gets the trip really well. In hindsight he was rather unlucky last year as the only horse that beat him [Sweet Selection] was 17lb well in and went on to win a Group 3.”

"After Royal Ascot the obvious thing to do was to give First Mohican a total break, and we have brought him back gradually."

FIRST PUBLISHED 6:18PM, OCT 9 2017
It is a big step up from a maiden to a Group 1 and I would be stupid to assure you that he was going to beat horses like Expert Eye on Saturday