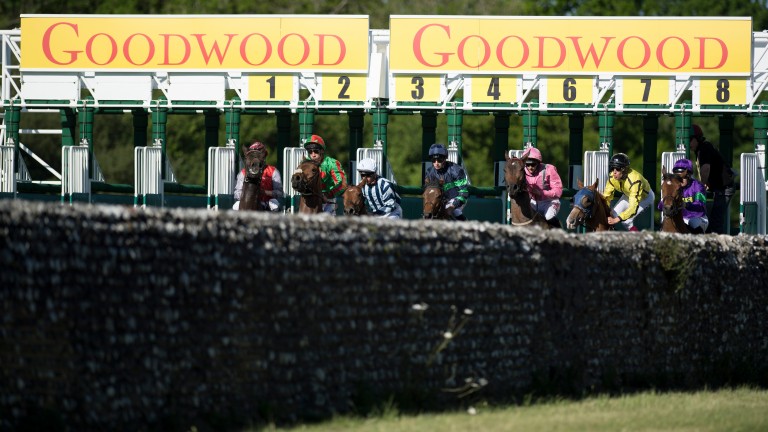 Racegoers at Goodwood's family fun day are encouraged to make their way down to the parade ring after the 4.15 in order to see the winner auctioned.

Selling races at Britain's biggest tracks used to be commonplace, but while York stages an even more valuable one than Goodwood's £10,000 event next Friday, they have become a rarity.

That's a shame as on occasions when they attract runners who are plainly rather better than plating class racegoers can enjoy fireworks in the betting ring and then again afterwards at auction.

Goodwood has regularly run a seller at its August bank holiday meeting, but this is just the second running of the 5f Speak Out Stay Safe Selling Stakes.

Clerk of the course Seamus Buckley said on Saturday: "We don't do it to make money, but it's a great novelty for the family on days like this to see horses being sold at auction.

"It's a nice experience to stand around the parade ring and watch it all happening, and these races are few and far between nowadays.

"We usually see the winner sold or bought in, and we get the odd one claimed too. That covers the costs of getting an auctioneer in and all that sort of thing, so we can get good money out of it, but for us it's more about the novelty and the spectacle."

Last year's race was won by favourite Billy's Boots, owned and trained by Mick Channon and ridden by Silvestre de Sousa, and bought in afterwards for £7,000.

Don't be surprised if history repeats itself, as Milton Road represents the exact same combination and is the stand-out on form if reproducing the level he showed when second twice at Brighton in the spring.

Three subsequent runs have not been quite so good, but he ought to be hard to beat unless one of the newcomers is better than average.

The afternoon's feature event is the 2m Maywal Handicap, which has attracted two big winners from the jumps world in Sternrubin, who dead-heated for the 2015 Ladbroke Hurdle at Ascot and gained a first Flat win at Windsor last month, and London Prize, who landed the Imperial Cup at Sandown in March.

In addition, jump jockey Trevor Whelan takes another step down the Flat racing route on Milord, who was a hurdles winner at Taunton in March for Kim Bailey.

Sternrubin suffered from colic shortly after the Windsor race but was lucky to avoid surgery.

Trainer Philip Hobbs said: "He spent a night away at Bristol but it sorted itself out and he didn't need an operation. He's been fine since and I hope he's got a good chance."

FIRST PUBLISHED 6:06PM, JUN 10 2017
It's a great novelty for the family on days like this to see horses being sold at auction. These races are few and far between nowadays